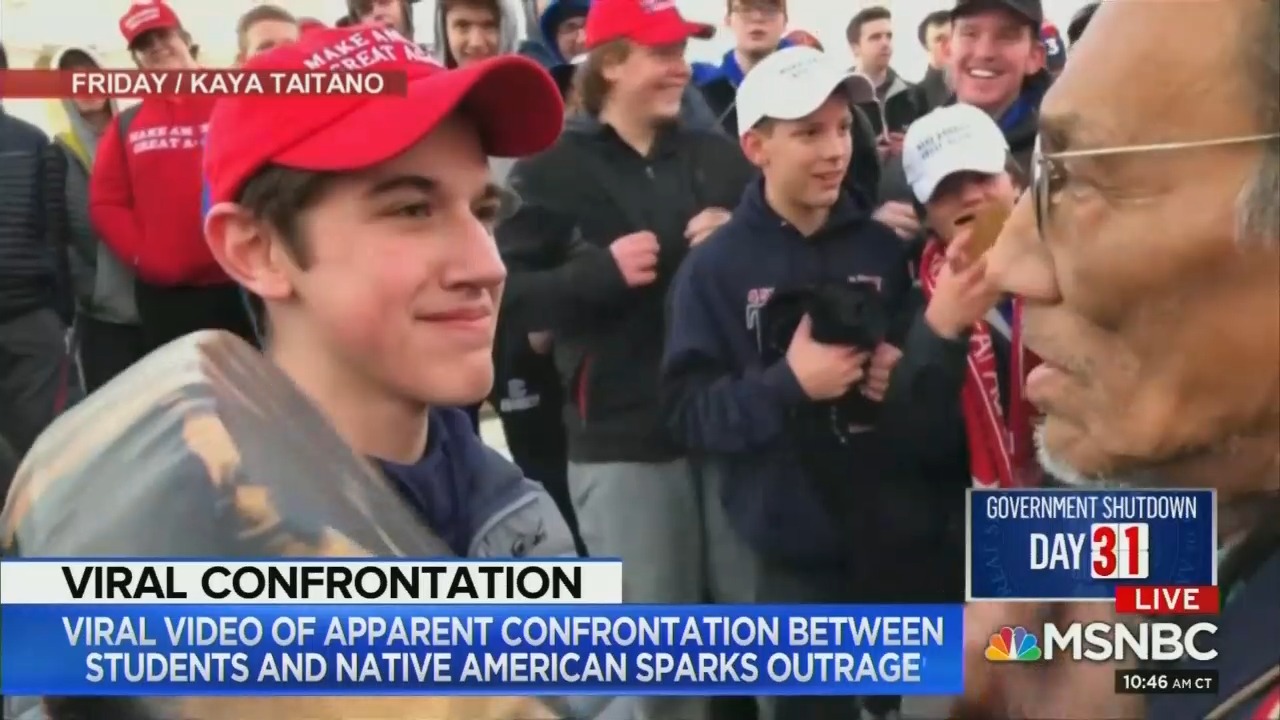 The New York Times used an old, unrelated local story to slanderously accuse Trump-supporting kids of racism. The charge was based on the now infamous viral video confrontation at the Lincoln Memorial between Catholic students, some wearing “Make America Great Again” hats, and an American Indian activist.

Members of the supposedly fact-based media have been obliged to furiously backtrack from their initial hot take of racist Trump students harassing a passive Native American activist Nathan Phillips.

Reporters Nikita Stewart and Eliza Shapiro couldn’t resist in “Elite School in Uproar Over Students in Blackface.” The text box: “A video joined a spate of racist imagery as the nation prepared to honor King.”

A shame they didn’t wait for the whole story to emerge before making their accusations. After more video clips surfaced, showing that the boys from the Catholic school, in town for the annual March for Life, had not only been unfairly smeared as racist but had themselves been the targets of racial animus by the Muslim group the Black Israelites, a later editor did damage control. That came too late for the paper’s early print National Edition, which let fly with accusations of “racist imagery.”

Monday’s story was keyed to an unrelated, recently resurfaced video clip from students at a local New York City school:

Two white girls in blackface grunted and swung their arms like apes. They jumped up and down to music playing in the background, moving in front of a camera, sneering as a third girl recorded them.

The six-second video snippet was recorded about two and half years ago, but it resurfaced this month, thrusting Poly Prep Country Day School in Brooklyn, one of New York City’s elite private schools, into the national conversation about racism.

This is how the next paragraph reads online, an attempt to support a pattern of teen-aged racism:

That same day, on the eve of the holiday weekend honoring the Rev. Dr. Martin Luther King Jr., the video of the Poly Prep students was lumped into a montage of other imagery that swept across social media: a viral video from the University of Oklahoma of a female student with her face painted black and using what sounded like a racial slur, and video of white male students wearing “Make America Great Again” hats who had encountered a Native American veteran of the Vietnam War outside the Lincoln Memorial last Friday. A longer version of that video posted over the weekend led to divergent views about what had actually taken place.

The paragraph above has been substantially edited from the original print version of the national edition, which read this way (differences in bold type):

That same day, on the eve of the holiday weekend honoring the Rev. Dr. Martin Luther King Jr., the video of the Poly Prep students was lumped on social media into a montage of other racist imagery that swept across social media: white male students wearing “Make America Great Again” hats who had surrounded and mocked a Native American veteran of the Vietnam War outside the Lincoln Memorial, a viral video from the University of Oklahoma of a female student with her face painted black and using what sounded like a racial slur

Also, the paper for some reason decided that this was a voice of reason:

“On the King holiday weekend, we are now dealing with blatant racism of a younger generation,” said the Rev. Al Sharpton, whose two daughters are alumnae of Poly Prep. “They’ve been emboldened.”

He added, “We have a problem.”

The New York Times is the one with the problem if its reporters are using racially inflammatory Al Sharpton as a racial healer of any kind (though that has never stopped them from praising the “Martin Luther King of the North” before).