Entertainment Weekly’s 2018 year-end double issue wasn’t as politicized and anti-Trump as the 2017 edition, but it contained a stark contrast in a “Worst Books of 2018” sidebar that shared the page with an homage (“Great Performances”) praising former First Lady Michelle Obama and her autobiography Becoming.

The online version of the “Worst...” article differs substantially from the print edition, so here are excerpts from both: 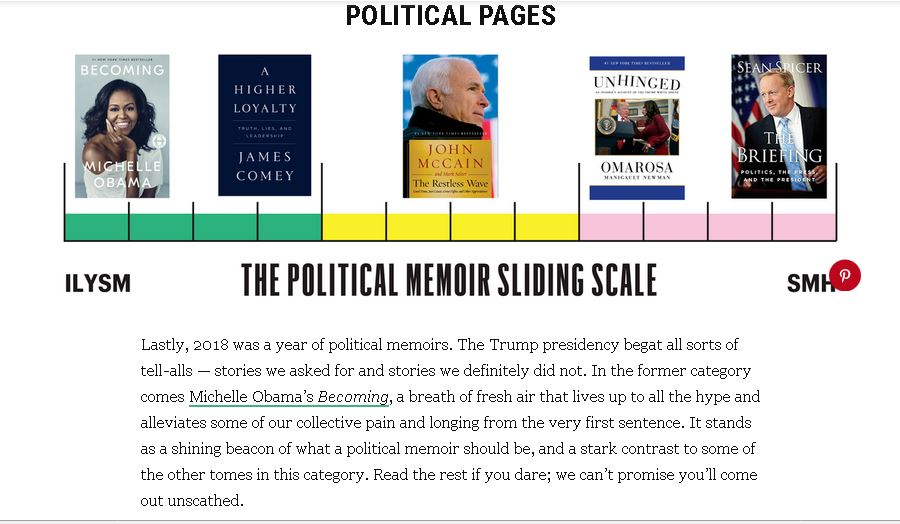 Before we get to the best of the rest, we have to deal with the icky stuff. Because, despite all the beautiful prose in 2018, there were still some titles that were irresponsible, problematic, or just plain tacky. In the former camp, we have [Rachel Hollis’s] Girl, Wash Your Face, a self-help book that serves only to make readers feel even worse about themselves than they did when they started, thanks to troubling missives about dieting and a boatload of white privilege.

Here’s the print version of the diss of the Hollis book, in capsule form:

“Lifestyle expert” Hollis’s best-seller is published by Christian publisher Thomas Nelson and has Biblical and faith references sprinkled in -- perhaps making it a default “conservative” book, which could help explain why Entertainment Weekly’s Seija Rankin and David Canfield got so vicious with it.

A conservative political book took a hit too. Here’s the print version of their capsule dismissal of Fox News host Tucker Carlson’s latest, Ship of Fools:

The Fox News host attempts a fiery expose of America’s ‘elite,’ but the book, filled with unsourced claims, comes off as tactless and shoddily reported.

Meanwhile, Michelle Obama’s autobiography Becoming was treated with just a little more respect (if you can stomach it). The online version of Seija Rankin’s piece:

Lastly, 2018 was a year of political memoirs. The Trump presidency begat all sorts of tell-alls -- stories we asked for and stories we definitely did not. In the former category comes Michelle Obama’s Becoming, a breath of fresh air that lives up to all the hype and alleviates some of our collective pain and longing from the very first sentence. It stands as a shining beacon of what a political memoir should be, and a stark contrast to some of the other tomes in this category. Read the rest if you dare; we can’t promise you’ll come out unscathed

The print version was only slightly less unctuous:

2018 was full of demoralizing sound bites, but on Nov. 13 a bright light cut through the gloom in the form of Michelle Obama’s long-awaited memoir, Becoming....it’s Obama’s candidness that shines through. Her revelations serve as a reminder to the rest of us that nothing is as perfect as it seems – and that her greatest performance happened when she no longer had to perform.