NYT’s Kristof Shoots Self in Foot Again With Rants on N.R.A. ‘Fanaticism’

New York Times Nicholas Kristof has taken on an old nemesis, the National Rifle Association, in two multi-media pieces over the last two weeks – two weeks that have witnesses shooting tragedies. The Sunday Review brought the photo-heavy “Witness the N.R.A’s Evolution -- Its magazine covers show how it shifted focus, to fanaticism.”

Another needless tragedy in America: This time a gunman opened fire in a bar in Thousand Oaks, Calif., killing at least 12 people and injuring many more.

These horrors happen far more often in America than in other advanced countries partly because of the outsize political influence of the National Rifle Association. N.R.A. candidates suffered some important defeats in Tuesday’s midterm elections, but in a broad swath of red state America it remains potent, controlling politicians who know that an N.R.A. endorsement can make or break an election.

Precisely which countries does liberal, multi-cultural Kristol consider “advanced countries,” and which ones does he find backward? 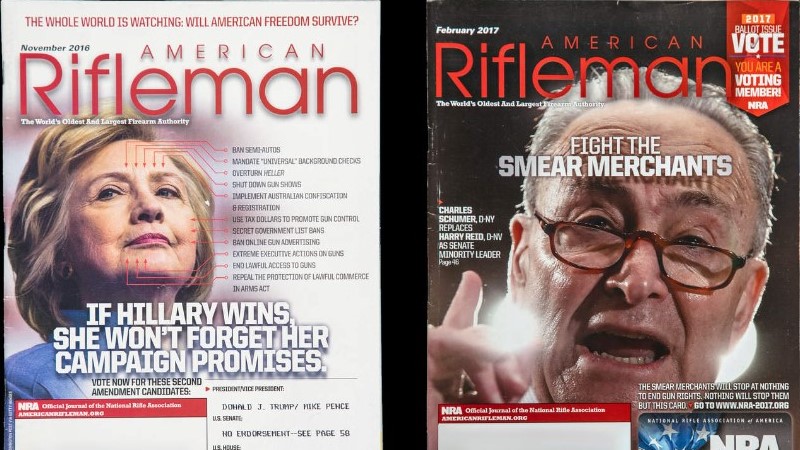 But the N.R.A. attracts incredible loyalty from its members. “That’s the critical thing people miss,” said Robert Spitzer, a political scientist at SUNY Cortland and the author of five books on gun policy. He said that the group combines a shared pastime with “ideological fervor.”

“It’s a layer on top of a hobby,” he said. “It’s bowling plus fanaticism.”

All N.R.A. members receive a subscription to one of the organization’s magazines. We studied one of them, The American Rifleman, for clues about how the N.R.A. spurs its members’ zealotry.

By....reading a magazine? Among the scary subheads: “The group exaggerates threats to manufacture paranoia.” The warn: "Recent covers have used apocalyptic language and imagery to provoke subscribers."

In the 2016 election, The Rifleman again attacked Hillary Clinton, then a presidential candidate, with an unflattering portrait....Covers have warned about “John Kerry’s Nightmare Presidency,” pointed to “Clinton’s Ambitions” and denounced “Pelosi’s Intentions.”

After the magazine cover display, Kristof knuckled down:

One of the reasons the United States has so many gun deaths is the N.R.A. and its extremist defense of handgun ownership, almost without limit. The evolution of the covers underscores that a group once about hunting and outdoor sports has transformed itself into a far-right political organization that simultaneously professes patriotism and promotes a virulent hostility to any government efforts to save the lives of Americans dying from guns at a rate of one every 15 minutes.

This was preceded by a graph-heavy interactive from Kristof October 29, “It’s Time to Talk About the N.R.A.,” which keyed on the Pittsburgh synagogue massacre.

Why is it that polls show that voters want more gun safety laws yet Congress can’t pass any? One reason is the National Rifle Association, a heavyweight player in this election and every election. On Tuesday, the N.R.A. once again will help deflect what surveys suggest is the people’s will to stop it.

Kristof pulled out his childhood membership credentials as a credibility shield, before delivering his flawed liberal history lesson: A gun-safety organization that has gone radical and “extremist.”

But it has been hijacked by extremist leaders committed not to their members’ (much more reasonable) views, but to hard-line resistance of safety regulations. All countries have violent, hateful people, but only in America do we give them ready access to assault weapons and large-capacity magazines, and that’s in part because of the N.R.A. and its political influence.

The Second Amendment? Few talked about it. Almost everyone, in and out of the N.R.A., accepted that there should be restrictions on firearms.

“Gun control laws were ubiquitous” in the 19th century, Michael Waldman notes in his book “The Second Amendment.”

David Harsanyi at The Federalist pointed out some of Kristof’s “misleading historical assertions.” Some highlights:

First, Kristof makes the claim that contemporary firearm advocates, in an effort to “reinterpret” the Second Amendment, had “expanded the gun-buying constituency by reframing the purpose of firearms from hunting to personal security.” As even a cursory reading of the Founders and American leaders through the 19th century can attest, this is untrue.....The fact is that in the 19th century there were no statewide or territory-wide gun control laws for citizens, and certainly no federal laws....It’s true that the NRA was not predominately political, since there was no need for such an organization in a nation where no one had seriously attempted to inhibit the ability of law-abiding citizens to own guns.