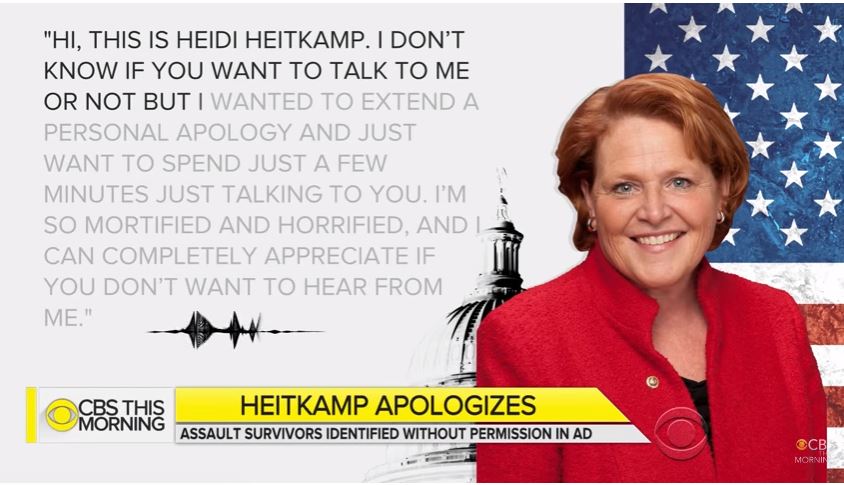 North Dakota Sen. Heidi Heitkamp’s seat may be the one Democratic-held Senate seat most at risk in the upcoming elections. But there was little acknowledgment of that reality – or one reason why it might be so – in reporter Catie Edmondson and data-cruncher Rachel Shorey’s validating Sunday New York Times piece “A ‘No’ Vote on Kavanaugh Yields a Windfall for Heitkamp’s Campaign Coffers.” The story came with a photo of Heitkamp looking populist in a campaign hoodie in North Dakota.

After Senator Heidi Heitkamp of North Dakota announced that she would not vote to confirm Judge Brett M. Kavanaugh to the Supreme Court, sympathetic voters went to work to show their support for the embattled red-state Democrat, writing letters of thanks and posting their appreciation on social media.

Others found a more practical way to demonstrate their gratitude: cold, hard cash. In 17 days, Ms. Heitkamp raised an astonishing $12.5 million, according to campaign finance filings; the bulk of that was after she announced her vote.

But just how “practical” is this pro-Dem “windfall” the paper is so enthusiastic about? After noting her Republican opponent Kevin Cramer “has opened a clear lead in recent polls” (he appears to be leading by double digits) the reporters point out she may find it hard to even spend it all:

The fund-raising bonanza could help -- if she could even spend it by Nov. 6 in a low-cost media market like North Dakota. Nearly all of Ms. Heitkamp’s donations came through ActBlue, a fund-raising platform that has helped Democratic candidates for the House and Senate raise more than half a billion dollars this cycle.

Before Ms. Heitkamp’s announcement, ActBlue was processing approximately $80,000 in donations for her every day. But when she announced on Oct. 4 that she would vote against Justice Kavanaugh’s confirmation, donations poured in, reaching $1.6 million on that day, and nearly $2 million the next. By Oct. 17, when the pre-election filing period closed, Ms. Heitkamp had raised more than $12 million in 14 days, of which more than $7 million came from donors giving under $200.

Ms. Heitkamp has her Senate colleagues to thank. At least a half-dozen Senate Democrats, including Kamala Harris of California and Cory Booker of New Jersey, implored their supporters through tweets and emails to donate to her campaign.

But the boost can also help the campaign send battalions of new staff members to knock on doors and bring people to the polls, an especially valuable tool in a state as sparsely populated as North Dakota.

Since Brett Kavanaugh was confirmed to the Supreme Court, the mainstream media has been muted on the subject of the hearings, perhaps sensing the issue’s power of drawing angry Republicans to the polls. But the Times managed:

But there was also a deeper emotional resonance for donors in the senator’s decision and accompanying statement to vote against confirming the judge. After Christine Blasey Ford testified that she was sexually assaulted by a teenage Justice Kavanaugh, Ms. Heitkamp wrote that she had “heard the voices of women I have known throughout my life who have similar stories of sexual assault and abuse.”

That would have been a prime opening to bring up Heitkamp’s offensive campaign newspaper ad that named sexual assault victims without their consent and which resulted in a firing of a staffer. But it went unmentioned. The Times’ single story on the matter October 16 evidently failed to even make it into print.

Instead, Edmondson rounded up some fawning tributes to Heitkamp.

That rang true for Lori Sirianni of New York, who donated to Ms. Heitkamp after Senator Kirsten Gillibrand sent out a call on Twitter urging support of her colleague’s campaign.

“I’ll never live in ND, but I donated to @SenatorHeitkamp too,” Ms. Sirianni responded. “She did the noble, honorable thing and stood up for all of us women & the integrity of SCOTUS.”