“Turncoat” is a term the New York Times has recently applied to, among other figures, Benedict Arnold, a Mafia boss, and the poisoned Russian agent Sergei Skirpal. Now it applies to Brooklyn State Sen. Simcha Felder, a Democrat who caucuses with the Republicans and has given the Republicans a one-vote majority in the New York State Senate. Monday’s story read “As Other Disloyal Democrats Suffer, One Brooklyn Turncoat Is Just Fine.”

The story itself, by Zoe Greenberg, signal boosted the harsh and unforgiving rhetoric from left-wing Democrats who consider Felder a “traitor” for not voting the party line. Greenberg herself used the fraught term “collaborated,” one definition of which is used during wartime to signify traitorous cooperation with an enemy. 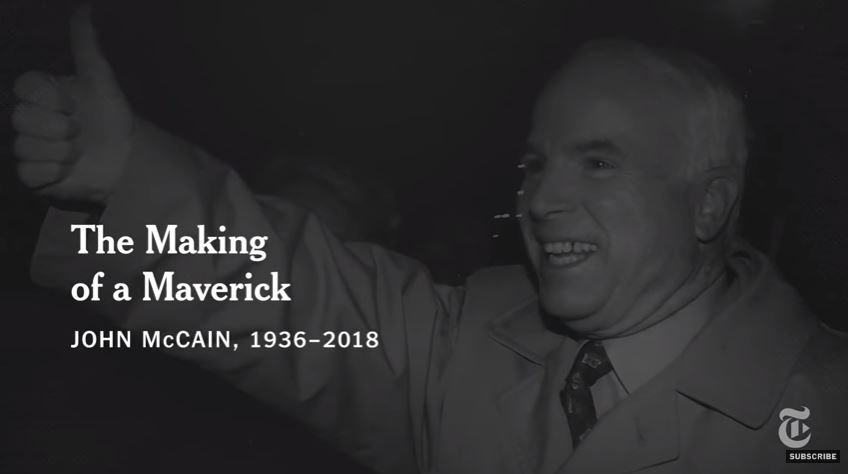 Yet when the shoe is on the other foot, the paper is quite receptive. The Times spent years praising Republican Sen. John McCain as a maverick who voted with the Democrats on campaign finance reform, immigration, and other issues (with a harsh interlude in 2008, when he ran against Barack Obama and abruptly became an old, warmongering, lying racist). It’s clear the Times, like the Democrats they support in their news pages, only like one sort of “maverick” -- a Republican who votes with Democrats. Do the opposite, and you’re a “turncoat” and a “traitor.”

On the evening of the Democratic primary in Borough Park, Brooklyn, Orthodox Jews clad in black hats and long coats lined up at Public School 192 to cast their votes. Most of them supported Andrew M. Cuomo for governor, but above all else, they had come to the polls for one purpose: to enthusiastically re-elect their local senator, Simcha Felder.

Across the state, Mr. Felder has been painted by his critics as a traitor and a turncoat, a rogue Democrat who sits with the Republicans, giving them a one-vote majority in the State Senate. He essentially held the state budget hostage in the spring until he won concessions for religious schools known as yeshivas, and he fought a tax on plastic bags that Democrats saw as a boon for the environment.

Because he stands in the way of Democratic control of the Senate, Mr. Felder has been a potent target for progressive ire.

But Mr. Felder, who was elected in 2012, has shown an even greater capacity to navigate political headwinds, and escape unscathed. The primary on Thursday was no exception: Mr. Felder dispatched his challenger, Blake Morris, a progressive candidate, winning 63 percent of the vote.

Most people exiting the polling place in Borough Park said they were unconcerned with Mr. Felder’s collaboration with Republicans, even seeing it as a benefit. (The district heavily favored Donald J. Trump in the 2016 election.)

Morris lost, but at least his watch party was enthusiastic afterward.

Mr. Felder did not have a watch party. He declined to be interviewed, only releasing a statement that asserted that the district’s voters acted “on the issues that matter to them: safety and security, quality of life and education.”

On a related note, conservative columnist Michael Graham posed a good question after listening to the encomiums prominent Democrats honored Republican Sen. John McCain with upon the senator’s passing last month: “If the Democratic Party really admires "mavericks" so much -- why don't they have one?”