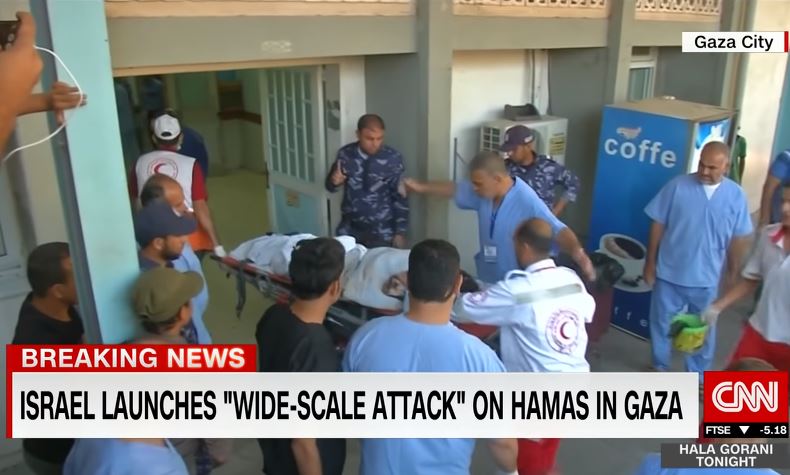 Israel is always to blame at the New York Times. A top-of-the-page photo of fleeing Palestinian protestors at the Gaza border on Saturday’s front page was deceptively captioned: “Israel Strikes in Gaza – Protesters at the Gaza border flee from an Israeli air assault on Friday. One Israeli soldier and four Palestinians were killed.”

From neither headline would you learn that it was the Palestinians that attacked first by assassinating an Israeli soldier, with Israel retaliating. But the blame-Israel first habit is ingrained in the paper’s coverage, most recently with the recent attacks on the Gaza border fence encouraged by Hamas.

Israeli warplanes launched a large-scale attack across the Gaza Strip on Friday, one of the fiercest in years, after a Palestinian sniper killed an Israeli soldier along the border fence during a day of escalating hostilities.

By midnight, about six hours into the attack, the military said it had struck about 60 targets, many of them around three Hamas battalion headquarters in northern, southern and central Gaza. The military said the targets included weapons stores, command-and-control rooms, observation posts and a drone warehouse. Expecting Israeli retaliation for the death of the soldier, the Hamas forces had evacuated their posts ahead of time.

This latest flare-up comes after months of tensions fanned by the often-violent protests along the fence dividing Israel and Gaza, during which Israeli snipers have killed more than 140 mostly unarmed Palestinians, according to Gaza health officials. The military says it has been acting to prevent breaches of the fence and to fend off attacks by Gaza militants, like the one that occurred on Friday.

That “often-violent” euphemism is at least an improvement on an April story on the protests (“a tentative experiment with nonviolent protest”) even as Palestinian protesters were burning tires, throwing rocks and Molotov cocktails and would soon “experiment” with kites as fiery weapons.

The friction had already led to two recent bursts of conflict, which ended with hurried efforts by Egypt to restore the cease-fire. In one such episode last weekend, two Palestinian youths were killed in an Israeli airstrike on an otherwise empty shell of a building used by Hamas as a training site, and four Israelis were wounded as more than 100 mortar shells and rockets were launched from Gaza.

According to the Times of Israel, however, it was terrorists in Gaza that struck first, not Israel, as the Times' sentence order implied. Here is how the Israeli paper described last weekends fighting

Terrorist groups in the Gaza Strip launched over 174 rockets and mortar shells at southern Israel throughout Saturday, the majority of them exploding in open fields, but with some landing inside Israeli communities, injuring three people and damaging buildings, officials said.

In response, the Israel Defense Forces launched its largest bombing campaign against Hamas targets in the Strip since the 2014 Gaza war, hitting dozens of targets, including two border-crossing attack tunnels and an urban combat training facility, the military said.

According to the Hamas-run Gaza health ministry, two Palestinian teenagers were killed in the Israeli strikes -- in a building over a Hamas tunnel -- and 25 others were injured by shrapnel.

There was similar Times slant against recent legislation passed by the Israeli parliament to characterize Israel more strongly as a Jewish state in a Friday front-page article by David Halbfinger and Kershner, “Israel Enshrines Rights For Jews – Critics Say a New Law Belittles Arab Citizens,” calling it an “incendiary move hailed as historic by Mr. Netanyahu’s right-wing coalition but denounced by centrists and leftists as racist and anti-democratic.” A follow up on Saturday was equally hostile in tone: “Israel Cements a Right-Wing Agenda With a Furious Week of Lawmaking.”