“Atrocities Under Kim Jong-un: Indoctrination, Prison Gulags, Executions” is a solid, depressing rundown of the totalitarian state in Monday’s New York Times. So why underline the brutality of the regime now? The timing seems calculated to embarrass President Trump, in Singapore at a summit meeting with the North Korean dictator Kim Jong-un. 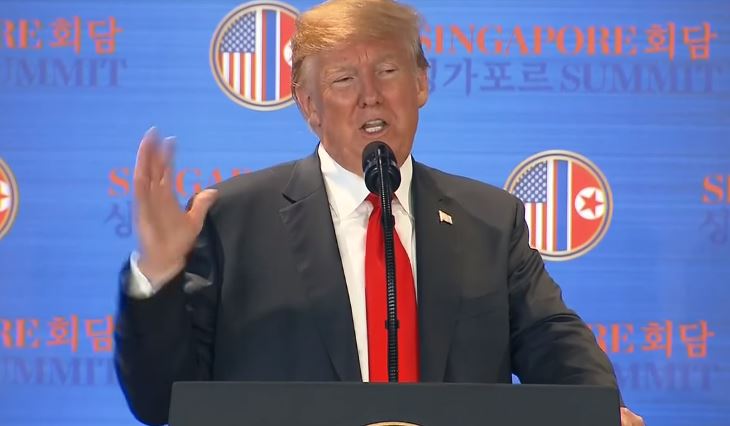 With the meeting of President Trump and Kim Jong-un of North Korea on Tuesday in Singapore, human rights groups are watching for Mr. Trump to bring up North Korea’s widespread crimes against humanity.

Mr. Kim rules with extreme brutality, making his nation among the worst human rights violators in the world.

They described the gulags in graphic detail.

People accused of political crimes are arrested and sentenced to prison camps without trials, while their families are often kept in the dark about their whereabouts. Up to 120,000 inmates were in the country’s four major political prisons in 2014 and were subjected to gruesome conditions, according to the United Nations report.

Prisoners are starved, forced to work, tortured and raped. Reproductive rights are denied through forced abortions and infanticide. Some are executed -- sometimes in public. Hundreds of thousands of political prisoners have died in the camps over the past 50 years, the United Nations report found.

Often the first human rights violations Westerners ascribe to North Korea, aside from preventing North Koreans from leaving the country, are the lengths it takes to indoctrinate its citizens.

The Times even mentioned the persecution of Christians, not exactly a running theme at the paper.

Christians are barred from practicing their religion, and those caught doing so are “subject to severe punishments,” the report found. North Korean leaders also conflate Christians with those detained in prison camps, those who try to flee and “others considered to introduce subversive influences,” the report stated.

The Times brought up the regimes use of starvation as a political tool:

Two million to three million people were believed to have died during an extended famine in North Korea in the 1990s, The New York Times reported in 1999, around when the country began to recover.

At the time, North Korea used food as a tool to enforce political loyalty, prioritizing its distribution based on who was most useful to the nation’s political system, the United Nations report stated.

It makes quite a change from the paper’s usual soft-pedaled treatment of the North Korean dictatorship. The paper’s coverage of the 2018 Winter Olympics in PyeongChan, South Korea in February was particularly bad, too obsessed with showing up Vice President Mike Pence to talk about North Korean atrocities, under the headline “Kim Jong-un’s Sister Turns on the Charm, Taking Pence’s Spotlight.” The Times gushed about the dictator’s sister on the front page:

When the North Korean leader, Kim Jong-un, decided to send a large delegation to the Winter Olympics in South Korea this month, the world feared he might steal the show.

If that was indeed his intention, he could not have chosen a better emissary than the one he sent: his only sister, Kim Yo-jong, whom news outlets in the South instantly dubbed “North Korea’s Ivanka,” likening her influence to that of Ivanka Trump on her father, President Trump.

Flashing a sphinx-like smile and without ever speaking in public, Ms. Kim managed to outflank Mr. Trump’s envoy to the Olympics, Vice President Mike Pence, in the game of diplomatic image-making.

The Times has a long history of downplaying the dictatorial nature of the North Korea regime. A March 2013 dispatch described then-new dictator Kim Jong-un as merely "a young new leader," while South Korea's female president was described as the daughter of "a military strongman."

[Editor's note: Article has been edited slightly in reaction to NewsGuard critique that it implied decades of media research instead of a more general opinion of Times editorial reflexes.]