Clyde Haberman’s sporadic “Retro Report” feature is advertised by the New York Times as a re-examination “of the leading stories of decades past,” but functions more like a convenient way for Haberman to gather up and repurpose old liberal talking points from previous failed bursts of activism and marshal them for a new one.

There was a time when horror over gun violence stood a chance of prodding national politicians to act on their outrage. Half a century ago, politicians seemed particularly amenable to tougher measures if a shooting victim was one of their own. After the assassination of President John F. Kennedy, and then mere months after the murders of Senator Robert F. Kennedy and the Rev. Dr. Martin Luther King Jr., Congress was moved in 1968 to enact a gun control law.

Haberman actually admitted that some gun control measures were racially based:

Racial considerations also came into play at times. It was no coincidence that California’s Legislature and its governor, Ronald Reagan, imposed new gun restrictions in the 1960s after two dozen rifle-carrying members of the Black Panthers entered the State Capitol building. In 1994, a federal ban on assault weapons was passed nine months after a well-armed black man, Colin Ferguson, shot and killed six passengers and wounded 19 others on a Long Island Rail Road train.

But he quickly returned to conventional liberal wisdom and anti-gun hostility. 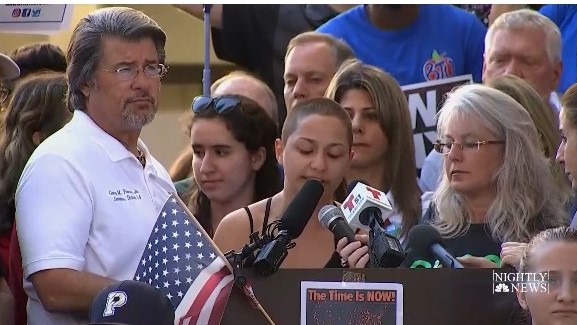 Trump was about to bend after the Parkland, Fla. massacre but “Once again, the N.R.A. and its fundamentalist interpretation of the Second Amendment prevailed.”

But is that organization as invincible as it has long seemed? Did the 17 Parkland deaths and the student-led protest marches they inspired change the dynamic and create a more favorable political climate for new gun laws, even if Washington has yet to do anything?

Haberman looked at the passage of the Brady Bill and dismissed conservative concern at the time over “arms confiscation” (which is rather popular these days) as “bogus.” Then the standard liberal lament about how the NRA has devolved:

There was a time when the N.R.A., founded in 1871, focused principally on hunting, marksmanship and conservation, and was willing to compromise on gun legislation. But in the late 1970s, its moderate leadership fell to a cadre of absolutists opposed to any hint of regulation....

How sustained this nascent movement will be remains to be seen. The long slog from the Brady shooting to the Brady Bill showed that any attempt at gun regulation is a marathon, not a sprint. But even in states that are politically as red as a barn door, some Democratic congressional candidates in the approaching midterm elections feel comfortable openly defying the N.R.A. and its demand for heel-clicking loyalty from elected officials.