Sports Illustrated magazine fawned over Colin Kaepernick after the magazine awarded him its 2017 Muhammad Ali Legacy Award, which aims to “celebrate individuals whose dedication to the ideals of sportsmanship has spanned decades and whose career in athletics has directly or indirectly impacted the world,” as Jay Maxson first reported on NewsBusters. Eleven pages of the December 11 print magazine were devoted to worship of the out-of-work quarterback. 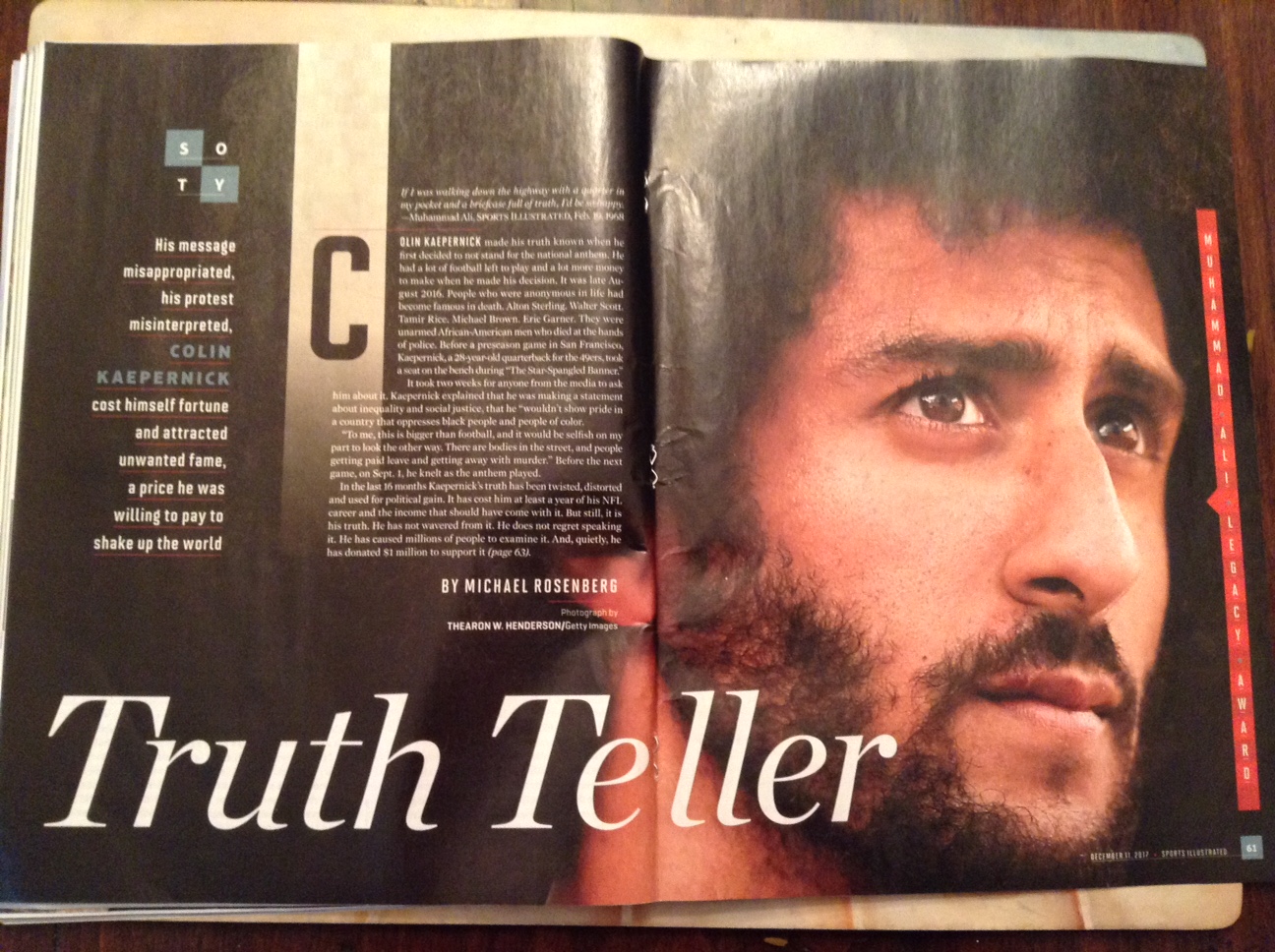 Colin Kaepernick made his truth known when he first decided not to stand for the national anthem. He had a lot of football left to play and a lot more money to make when he made his decision. It was late August, 2016. People who were anonymous in life had become famous in death. Philando Castile. Eric Garner​. Alton Sterling. Freddie Gray. They were tragic symbols of a society that had taken a terribly wrong turn. As the anthem played ahead of the 49ers' preseason game against the Texans, Kaepernick, San Francisco's 28-year-old quarterback at the time, quietly took a seat on the bench.

It took two weeks for anyone from the media to ask him about it. Kaepernick explained that he was making a statement about inequality and social justice, about the ways this country “oppresses black people and people of color.”

“To me, this is bigger than football and it would be selfish on my part to look the other way,” he added. “There are bodies in the street,” he said then, “and people getting paid leave and getting away with murder.”

Here’s Kaepernick full quote, including the contempt for the American flag Rosenberg omitted: “I am not going to stand up to show pride in a flag for a country that oppresses black people and people of color. To me, this is bigger than football and it would be selfish on my part to look the other way. There are bodies in the street and people getting paid leave and getting away with murder.” In fact, Rosenberg managed to leave out the rather relevant word “flag” from his article.

Rosenberg insisted that Kaepernick was being unfairly smeared.

In the last 16 months, Kaepernick’s truth has been twisted, distorted and used for political gain. It has cost him at least a year of his NFL career and the income that should have come with it. But still, it is his truth. He has not wavered from it. He does not regret speaking it. He has caused millions of people to examine it. And, quietly, he has donated nearly a million dollars to support it.

For all those reasons -- for his steadfastness in the fight for social justice, for his adherence to his beliefs no matter the cost -- Colin Kaepernick is the recipient of the 2017 Sports Illustrated Muhammad Ali Legacy Award....

The text box of Rosenberg’s fawnathon read: “His message misappropriated, his protest misinterpreted, Colin Kaepernick cost himself fortune and attracted unwanted fame, a price he was willing to pay to shake up the world.”

The article made grand claims for Kaepernick, who bashes America after becoming rich doing something he could only make a career out of in North America:

....no winner has been more fitting than Kaepernick. Ali lost more than three years of his career for his refusal to serve in the military in opposition to the Vietnam War. Kaepernick has lost one year, so far, for his pursuit of social justice.

Hopefully he can scrape by somehow on the remains of his pitiful $15 million annual salary.

Kaepernick kept his job for a season before being blackballed by the NFL -- and yes, he has been blackballed. This should be obvious by now....Kaepernick has paid a price beyond missing games and losing paychecks. He has been battered by critics who don’t want to understand him. Some say Kaepernick hates America; he says he is trying to make it better...

Rosenberg briefly examined the scratches in Kaepernick’s halo, only to buff them out.

Kaepernick has listened to the President of the United States take credit for his unemployment. He has seen others falsely claim that he has disappointed the white parents who raised him. He has heard people discredit him because he wore socks that depicted pigs in police hats and a T-shirt with Fidel Castro’s picture on it. (He has said the socks were only meant to represent “rogue cops” and that while he supports Castro’s investment in education, “I never said I support the oppressive things he [Castro] did.”)

There is one criticism Rosenberg found acceptable, hailing from the “reasonable, woke” left wing:

Nobody claims Kaepernick is perfect. Reasonable, woke people can be upset that he did not vote in the 2016 election...

Someday, America may well be a better place because of Colin Kaepernick. This is hard to see now -- history is not meant to be analyzed in real time. But we are having conversations we need to have, and this should eventually lead to changes we need to make....

Greg Bishop and Ben Baskin examined Kaepernick’s liberal donation patterns in “The Kap Effect." The print subhead: "Yes, the QB took a stand by kneeling: But just as important: He pledged $1 Million to the issues that drove him to protest. A close examination of how Kaepernick has given that money away – and to whom – reveals a blue print for real social change.”

Some of the money went to worthy causes, though much of it went to “anti-police brutality” initiatives and “climate change awareness,” which seems a stretch, and the pro-abortion Center for Reproductive Rights, which has nothing to do with making black lives better. Oblivious Sports Illustrated signed off on every penny as the height of activist compassion.

I have never been prouder to be an American.

That might seem like a strange confession in these dark times, when there is so much divisiveness in the country. Every day we are faced with cringe-worthy behavior by our country’s leaders: sexual harassment, enabling hate groups by publicly echoing their messages, the enactment of policies that curtail the constitutionally guaranteed civil rights of the nonrich. We who love our country are often left embarrassed, enraged and exhausted. It’s as if some jokester slapped a going out of business sign on our country’s back and scribbled underneath: everything (we stand for) must go.