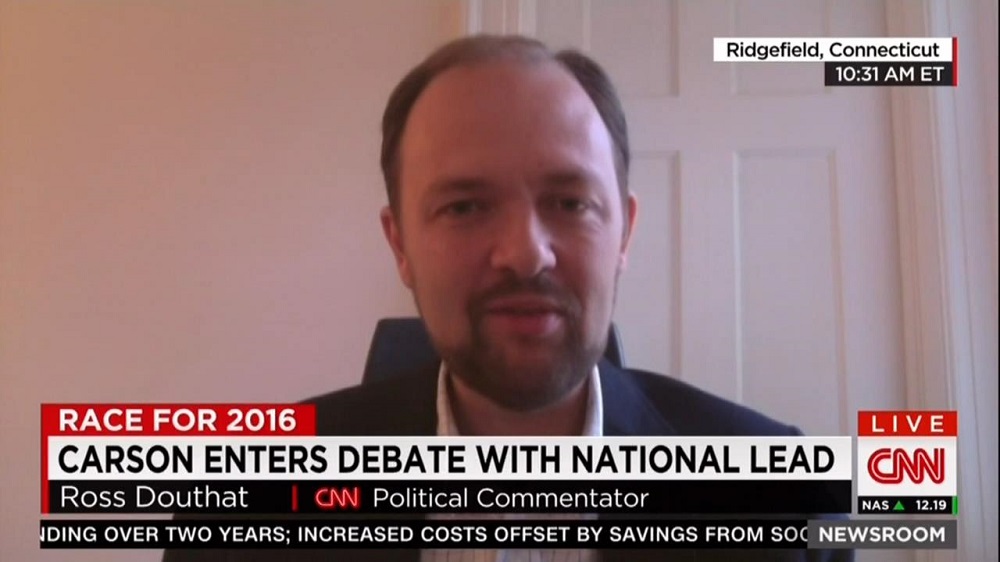 New York Times columnist Ross Douthat, one of now two slightly right-leaning voices on the paper’s resolutely smugly liberal opinion page, penned “Notes on a Politcal Shooting” in the Sunday Review on the assassination attempt on House Republican Steve Scalise by a Bernie Sanders supporter on a baseball field in Alexandria, Va.

In his own diplomatic way -- his gentle tone a protective necessity to avoid riling the liberal comment section and Twitter mobs with his vile right-wingery -- Douthat got in some jabs at the liberal media. He also, sub rosa, chided the fake facts that appeared on the paper’s own editorial page regarding the shooting of Arizona Democrat Gabby Giffords. A June 15 editorial falsely claimed that a map of congressional districts posted by Sarah Palin, the sort used by Democrats and Republicans alike, was “incitement” for Giffords’ shooting by a paranoid schizophrenic, Jared Lougher. The paper was rightly savaged by conservatives until pressed to make a correction and tweet out a brief apology.

Douthat provided a brief history of political assassinations to demonstrate that “Where modern assassinations are concerned, such normal partisan motivations are more unusual than you might think.” Then he jabbed the liberal media:

And most recently -- if a little less famously, because the media spent a long time assuming that he was Tea Party-inspired -- Jared Lee Loughner shot Gabby Giffords because he was a lunatic obsessed with (among other things) the government’s control of grammar, and she had failed to answer his town hall question: “What is government if words have no meaning?”

That certainly applied to the NYT’s disgraceful take (then and recently) on the Giffords shooting, including the lie that conventional “target” graphics on a map of congressional districts posted by Sarah Palin -- the sort used by Democrats and Republicans alike -- was harmful political rhetoric that somehow inspired the shooting. This despite the facts that Loughner was a schizophrenic whose web pages were filled with crazed syllogisms and dominated by thoughts of mind control. As NewsBusters previously pointed out, there was no indication Loughner was aware of Palin's electoral map, and he had been obsessed with Giffords before Palin’s map even existed.

Douthat (again, politely) showed up the media’s protective instincts toward Democrats (though “involuntary” may be overly generous):

The second thing to say is that a murderous attack on Republicans by an angry liberal should be an important reminder for our media-cultural establishment that societies can be pulled apart from the left as easily as from the right. Of course, network anchors and magazine editors and editorial boards know this on an intellectual level. But because our centrist elites are actually center-left there is a constant, involuntary tug toward emphasizing what’s wrong on the right-wing side of the spectrum and excusing what’s wrong on the other.

There’s a great deal wrong on the right in the age of Donald Trump, and the scrutiny directed rightward is not at all misplaced. But as Trump proves more hapless than dangerous -- or only dangerous because he’s hapless -- the derangement that he inspires or amplifies among his critics also matters. And if America slides toward a rendezvous with 1968, the tendency of the establishment to only see one side’s dangers -- to treat Marine Le Pen as uniquely terrifying but Jeremy Corbyn as merely dotty, to “remember” that Loughner was a Palin fan or that right-wing hate killed J.F.K. -- will make things more dangerous overall.

Part of what went wrong in America in the later ’60s was that the liberal establishment carried water for, protected or excused its far-left children’s rage. Part of what could go wrong today is evident in the way that violence in the left-wing core, the university campus, gets met with excuse-making, appeasement and halfhearted punishment from liberal authorities. The House whip bleeding on a baseball field is a reminder that brighter lines against lesser acts of violence serve the entire culture well.