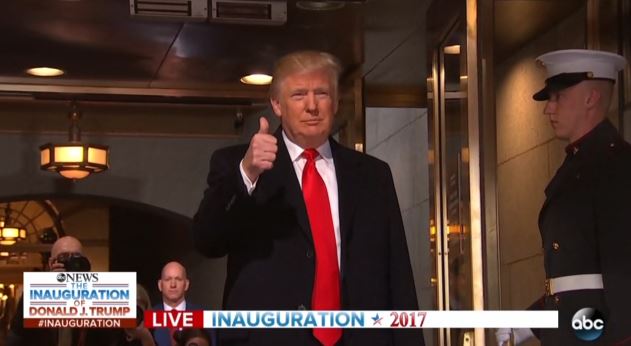 Emphasizing its newly discovered commitment to aggressive journalism now that Donald Trump is president, the New York Times has hired a fact-checker from PolitiFact to bolster its case for lying Trump. Twice in two days Linda Qiu has slammed President Trump’s alleged falsehoods. On Saturday she went after Trump's speech to the Conservative Political Action Conference: “After Denouncing ‘Fake News,’ a Catalog of Falsehoods.”

President Trump’s speech on Friday at the Conservative Political Action Conference followed a familiar pattern: Blast the news media as “dishonest,” repeat a string of falsehoods and wrap up by promising to change the status quo.

“Look at CBS, look at ABC, also, look at NBC, take a look at some of these polls. They’re so bad, so inaccurate and what that does is it creates a false narrative.”

This is misleading. Mr. Trump, who trailed Hillary Clinton in major national polls leading up to the election, ended up winning the Electoral College. But most of the polls Mr. Trump referred to actually reflected the popular vote total within the margin of error.

Actually, with outlets like the New York Times running graphics showing Hillary Clinton with an 85% chance of winning the election late on Election Night, it’s perfectly defensible to claim that the media got the election wrong.

Mr. Trump said he got many votes from supporters of Senator Bernie Sanders.

“Not that I’m a fan of Bernie, but a lot of Bernie people voted for Trump because he’s right on one issue: trade.”

No evidence. Mr. Trump and Mr. Sanders hold similar positions on global trade, but there’s no evidence that huge swaths of voters who supported Mr. Sanders voted for Mr. Trump.

After the Democratic National Convention, polls indicated that a majority of “Bernie people” would vote for Mrs. Clinton. Mr. Trump’s support among those who preferred Mr. Sanders ranged from 3 percent to 13 percent, depending on whether third-party candidates were also included in the question.

The above is some extreme nitpicking: The phrase “A lot” in an imprecise phrase with plenty of wiggle room and doesn’t lend itself to fact-checking. And Qiu offered a weak counterargument. Who gave her the final say on what precise percentage or number of the vote would constitute “a lot”?

Mr. Trump described the country as having open borders.

“We’ve defended other nations’ borders while leaving ours wide open, anybody can come in.”

False. The United States apprehended 415,816 people in the 2016 fiscal year, so hundreds of thousands of people did not just “come in.”

Again, “wide open” is obviously a metaphor for an overly porous border and another overweening attempt to take everything Trump says literally, without the copious benefit of the doubt the media gives to Democrats.

“Obamacare covers very few people. And remember, deduct from the number all of those people who had great health care that they loved that was taken away from them.”

False. About 20 million people have gained coverage under the Affordable Care Act, and the uninsured rate has dropped to a record low of 10.9 percent.

Huh? It’s a brute fact that Obamacare led to people losing their coverage, no matter how the aggregate figures stack up.

Mr. Trump again invoked Sweden as an example of the detriments of immigration.

“The people over there understand that I’m right. Take a look at what’s happening in Sweden.”

False. Mr. Trump referred to a nonexistent terrorist attack in Sweden during a Feb. 18 campaign rally in Florida, baffling an entire nation.

If he was referring to crime in a country known for taking in large numbers of refugees, the data does not support him, either. The Swedish National Council for Crime Prevention found no significant increase in overall crime rates from 2015 to 2016.

Official figures on the complicated subject of Sweden, refugees, and violent crime have been challenged, and Trump’s vague statement nonetheless raises questions about refugees and violent crime in Sweden that the politically correct soveriegns of Sweden (and the NYT) are clearly reluctant to address publicly.

Back on Friday, Qiu fact-checked Trump on the temporary travel ban that applied to seven countries with mostly Muslim population, characterized by Qiu as “some of the more misleading claims Mr. Trump and his administration have made about the first iteration of the travel ban.” This was the lowlight:

Mr. Trump suggested that the U.S. Court of Appeals for the Ninth Circuit has an unusually poor track record.

“In fact, we had to go quicker than we thought because of the bad decision we received from a circuit that has been overturned at a record number. I have heard 80 percent, I find that hard to believe, that is just a number I heard, that they are overturned 80 percent of the time.”

Not the highest reversal rate. Mr. Trump has repeatedly knocked the court that blocked his executive order, and he is right that the Supreme Court reversed eight out of 10, or 80 percent, of Ninth Circuit cases on which it had a definitive ruling in 2015. But that’s neither a record nor particularly meaningful, as PolitiFact has reported.

Two other circuits -- the state courts and the 11th Circuit -- had higher reversal rates that year, at 85 percent and 100 percent. And just under 12,000 cases were filed to the Ninth Circuit from March 2014 to March 2015, meaning the Supreme Court reversed less than a tenth of a percent of all the cases the circuit has heard.

Mollie Hemingway at The Federalist took down a similarly slanted Politifact “fact check” and in the process showed that the Ninth Circuit had by far the most total number of reversals.