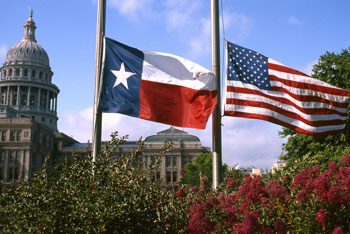 The entire front page of Sunday’s New York Times National section was swallowed up by an essay from Texas correspondent Manny Fernandez, “A Look at What Makes Texas Texas,” a cultural cringe in 1,700 words from Fernandez, who isn’t a Texas native but moved to Houston in 2011 to cover the state for the NYT,

It’s part of the paper’s occasional “Assignment America” series. Other entries, from reporters with home ties to their respective regions, managed to avoid partisan politics. But Fernandez stills seems slightly freaked when confronted with some of the state’s more provincial customs, his “hard-right” neighbors, or the “fear, anger and sometimes paranoia that lurks beneath the surface of Texas politics.”

Fernandez may indeed be politically out of step with his fellow Texans. In 2014 he excitedly jumped on the phony legal attacks unleashed against Texas Gov. Rick Perry as a “major roadblock" and a "stunning rebuke" that "threaten[s] to tarnish his legacy," and noted “The indictment could mar the legacy of Mr. Perry.” He seemed unhappy when the charges were belatedly dismissed earlier this year.

Gov. Greg Abbott’s campaign sent me an email one morning, showing the governor aiming a pump-action shotgun in my direction. This was a view of an elected official I had never seen -- the get-your-hands-up view. If I contributed $25 to his campaign, I would be entered in a contest to win a shotgun. The subject line of the email read: “Shotgun!” It was a typical morning in Texas.

The prize was special, though. It was not a rare antique. It was, the email noted three times, a Texas-made shotgun.

Who are these people, these Texans? What do they tell us about America? What to make of a state that is so focused on itself? I wrestle with these questions all the time.

One day, behind a general store in Central Texas, a firearms instructor in a wide-brimmed cowboy hat reached for the butt of his holstered gun as I approached him for an interview. The general store, the hat, the reach for the gun: the line between the myth of Texas and the reality of Texas is razor thin.

I have met Texas Rangers who actually do seem larger than life and artists and writers who have taken the state’s entrepreneurial energies in entirely cool directions. I’ve met conspiracy theorists, Texas secessionists and Texas nationalists (there is a difference), as well as those in the parallel and wholly separate Texas made up of the uninsured, the undocumented, the imprisoned and the poor....

He found the state a "carcicature" of conservative politics.

Texas has long had an anti-Washington streak, but, lest anyone doubt it, the state has sued the federal government more than 40 times in the past 13 years. In December, an executive committee of the Republican Party of Texas approved a resolution supporting secession and calling for the issue to be put to voters statewide. (Party leaders struck down the resolution after a heated debate.)

This new ultra-Texas started in 2009, shortly after President Obama took office -- replacing a Texan, George W. Bush. Since then the lines between being pro-Texas, anti-Obama and anti-American blurred, and there has been no going back. So while other red-state governors gripe about federal overreach, Mr. Abbott is the only one to propose, in a 92-page document called the Texas Plan, a convention of states to amend the Constitution to allow states to override Supreme Court decisions and federal regulations.

But the idea that Texas is the last place is part of a new phenomenon. People throughout the state say they believe that their way of life is under assault and that they are making a kind of last stand by simply being Texan. It is this fear, anger and sometimes paranoia that lurks beneath the surface of Texas politics and that underlies the expansion of gun rights, the reflexive antagonism toward Washington, and the opposition to abortion, same-sex marriage and other issues that seems essential for succeeding in state politics these days. Senator Ted Cruz’s remarks dismissing New York values at a Republican debate should come as no surprise. That’s how people from the last best place talk about other places.

The hard-right domination of Texas politics frustrates the state’s Democrats and plenty of others in Austin, Houston, Dallas and San Antonio. They are agitated, but they stay put because they view Texas as forever, and Republican Texas as a kind of temporary occupation. It’s hard to know if they’re right, but easy to see why people’s emotional investment in Texas transcends conservative politics.

Returning to his evident distaste for firearms, Fernandez attended Abbott’s inauguration and noted that “Texas marked the occasion with the sounds of warfare. It was the inaugural tradition of cannon fire." He concluded on that note of cultural cringing on behalf of his fellow Texans (who certainly aren't embarrassed of their state themselves).

People flinched as the echo of artillery filled the streets. From a distance, it must have sounded like Austin was under attack. Up close, it felt like the opposite: Austin was doing the attacking. And there, for me, was Texas: The last best place with state-sanctioned cannon fire, making people proud while making people wince.