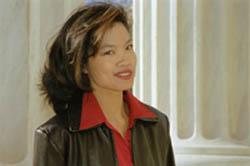 "Last week, as YouTube continued its recent campaign to spit-shine its image and, perhaps, to look a little less ragtag to potential buyers (including Google, which was said to be eyeing the upstart in the $1.6 billion range), the company took a scrub bucket to some questionable political graffiti on its servers, including a video entry from the doyenne of right-wing blogs, Michelle Malkin."

Malkin's video as Zeller describes it: "Ms. Malkin’s video, titled 'First They Came,' had resided on YouTube for some time, and is essentially a crude slideshow paean to people -- authors, politicians, filmmakers -- who had been made targets, she implies, by intolerant Islamic fascists."

Later in his "defense" of Malkin, he covers himself:

"This is not to suggest that Ms. Malkin’s video would not be particularly offensive to some people. There is little that Ms. Malkin says or does that is not. But it is hard to imagine what YouTube hopes to gain by punting such content, or what sort of uphill rhetorical battle it is setting itself up for when it does so."

This kind of snottiness in a story that basically takes Malkin's side on the issue. One wonders what Zeller would have written if he took YouTube's side.