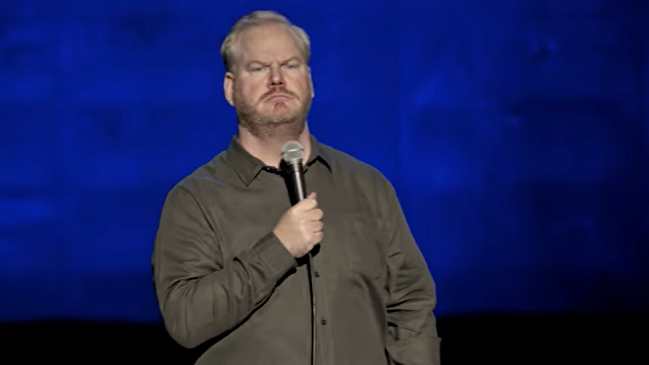 Jim Gaffigan isn’t content with his celebrated stand-up career. Yes, Gaffigan returns to his comedy roots via the Amazon Prime exclusive special Quality Time. The special comes on the heels of his 2018 show Noble Ape.

His side hustle, in-demand actor, is getting plenty of attention, too. Consider his impressive turn in last year’s Chappaquiddick and the just-released comedy Being Frank.

The stand-up comic’s new film caught him by surprise, but not for anything in the movie itself. He noticed how professional film critics treated the tale of a man fronting not one but two families.

Gaffigan shared his dismay at the film’s critical reaction on the latest episode of “The Joe Rogan Experience.”

The comedians initially explored the changing media landscape, with Gaffigan noting his father-in-law once served as a film critic. Today, given how few newspapers employ full-time film critics, many cover Hollywood without compensation.

The conversation soon shifted to “Being Frank,” a project which barely made a dent at the U.S. box office but continued to display the comic’s range.

Gaffigan acknowledged the film’s lukewarm reaction from film critics, but that wasn’t what bothered him. He didn’t appreciate how critics penalized “Being Frank” in ways that had nothing to do with its quality.

“A lot of the reviews … there was a tone of like, ‘how dare this white male [laughs] have two families,'” he said. “They couldn’t get beyond … they would insert, like, a social commentary onto a platform that was not for that.”

“Some reviews were like, ‘they under-served them!’ You know, the movie was really about my character and his son,” he said. “Because of the day we live in, it had to deciphered through this kind of social critique that is just absurd. And it wasn’t here and there. It was a lot of reviews like that.”

Rogan agreed, expanding on how the quest for diversity trumps all.

Rogan then shared some of his creative friends’ frustrations about navigating the woke era.

“When they pitch shows to the network … if they have a story or idea, [the studio executives are] like, ‘OK, where’s the diversity?’ It’s like one of the first question.”

“‘Well, it’s about an Irish family that lives in the Bronx. I don’t know what to tell you … this is what the story’s about.’ ‘Well, where’s the diversity?’ You have to insert diversity to meet their criteria … you can have a story about a Haitian family … no one’s gonna say, ‘What about white guys? You need to get white guys on the show.'”

Neither Rogan nor Gaffigan are politically conservative. Rogan is very difficult to nail down, ideologically speaking. Gaffigan described himself as liberal during the interview. Hearing them discuss our PC age, though, makes it sound like clips from “The Andrew Klavan Show.”

Gaffigan’s lament falls squarely in line with another liberal comic’s potential awakening. Sarah Silverman’s liberal bona fides are without question. Still, she recently shared how the Outrage Mob came for her.

She had landed a small but coveted film role but lost the gig at the very last moment.

The folks behind the project discovered she had dressed in blackface for an episode of her old Comedy Central sitcom.

Did it matter that Silverman had repeatedly apologized for the sequence? Or that the moment captured a narrative on cultural discrimination.

Context is immaterial to Social Justice Warriors seeking scalps. And they walked away with Silverman’s without a fight. She whined about losing the gig, decrying how her fellow liberals were to blame.

“It’s like, if you’re not on board, if you say the wrong thing, if you had a tweet once, everyone is, like, throwing the first stone,” she continued. “It’s so odd. It’s a perversion. It’s really, ‘Look how righteous I am and now I’m going to press refresh all day long to see how many likes I get in my righteousness.’”

Did the moment show Silverman the folly of today’s woke era? Will Gaffigan become a voice for reason in an increasingly unreasonable time?

We’ll have to wait and see. The odds for change are much better, though, when a person experiences the woke discrimination first hand.