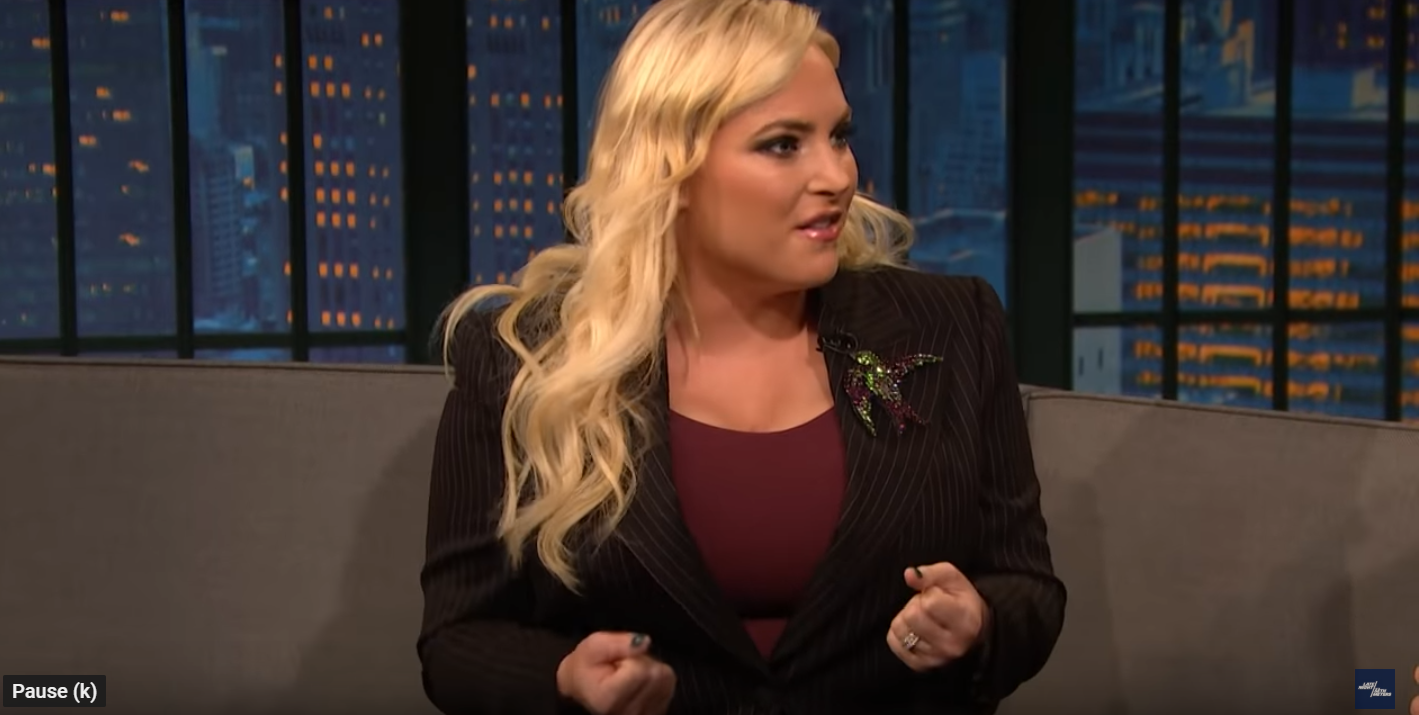 It’s not simply a Left/Right thing.

McCain has a better grasp of the facts, avoids lazy talking points and eagerly fires back when her liberal co-stars critique her views. All three tactics were in short supply before McCain joined the show.

That never seemed to bother the left, though. After all, McCain is only one voice out of three to five liberal women on the long-running program.

Things changed recently after McCain dressed down the host of Late Night with Seth Meyers on his very own couch.

The two grappled over Rep. Ilhan Omar’s repeated use of anti-Semitic language, with Meyers defending the Congresswoman at every turn.

He even explained away her “some people did something” remark tied to the Sept. 11 attacks.

So McCain shot back, asking if he was Omar’s “publicist.”

Her wording left a mark, and then it went viral.

That, apparently, could not be tolerated in select circles. How do we know this? Look at what we’ve seen in just the last few days.

First, the far-left Saturday Night Live cranked out a new View parody, this time targeting McCain above her colleagues. It isn’t the first time the show mocked the syndicated talk show. The focus this time, though, proved telling.

The clip takes great pains not to mock McCain’s liberal co-horts – at all. They didn’t hold back on sorta-kinda right-leaning Abby Huntsman, though, portraying her as a moron.

The skit still saved its most withering attacks for McCain.

The sketch showcases McCain as a blank-eyed fool who can barely make a cogent sentence. It also mocks her for claiming to be interrupted when she’s not. Well, if you’ve watched eight seconds of any View episode you know “cross-talk” defines their banter.

Chalk it up as another lousy SNL sketch that misses some juicy targets, namely Joy Behar’s hard partisan rants. That wasn’t the point of the sketch, of course. Modern comedy must have a victim, and it’s almost always someone on the right.

In short, McCain’s counter-punch against Meyers unleashed the left.

Less than 24 hours later, HBO’s Last Week Tonight took its own swing at McCain. Host John Oliver hammers McCain with a joke out of comedy’s left field. The far-left comic brought up an absurd incident involving the off-spring of a European diplomat. The New York Post explained:

“You may be thinking that’s the most embarrassing child of a prominent political figure you’ve ever seen, but let me remind you of the continued existence of Meghan McCain!” Oliver said.

Why? He doesn’t say.

The comment just hangs in the air, with his progressive audience howling at the mention of a Republican pundit.

Oliver then turned his attention to McCain’s husband, The Federalist publisher Ben Domenech. The conservative scribe lashed out at Meyers on Twitter following the talker’s dustup with his wife. Domenech later took down the Tweets and apologized for losing his cool … while defending his wife.

“Oh no! Oh no! I bet her husband is going to get so mad at me now!” Oliver joked. “What on earth is he going to tweet and then delete? I can’t wait to find out!”

Does anyone think the McCain mockery will end here? Or that the timing of these two bits is coincidental? Consider two recent news articles connected to McCain. The progressive Daily Beast attacked McCain for, well, taking part in The View’s daily debate. Here’s the hyperbolic headline: “Meghan McCain Demands to Be Taken Seriously by ‘The View’ Co-Hosts.”

Now, read the words used to describe McCain as the writer recreates part of an on-air debate:

“Fine,” McCain huffed, rolling her eyes, demonstrating clearly that she was “clearly frustrated.”

Co-host Whoopi Goldberg then jumped in to suggest that ignoring subpoenas should equal jail time, drawing cheers from the audience.

This appeared to get on McCain’s nerves. “I’ll wait until everyone is done applauding,” she said.

“I’m sorry, but it’s all over the Internet,” McCain shot back, defensively, as Goldberg got up from the table and walked away.

“As a dedicated fan who watched live last night – like everyone is supposed to!” McCain doubled down. “It was terrible! I’m so disappointed!”

Apparently McCain was getting quite the bad reax from the studio audience, because, she added, pointing at them, “I’m sorry you guys are so triggered by me telling the ending.”

“You guys are genuinely upset! Why is this a Hot Topic then, if I’m not supposed to talk about it?!” McCain said, turning her wrath on show producers.

This all happened in under a week’s time, mind you. The left moves swiftly, collectively and with purpose.

Up until now, McCain’s View reign has mostly gone under the radar. The media shrugged as she eviscerated her colleagues’ arguments and spat out facts in a rat-a-tat-tat style.

Now, just days after she dressed down a figure beloved to the far left, SNL and Oliver rush to his side, followed closely by two reporters.

McCain better understand there’s a giant target on her back for daring to speak truth to power against a liberal darling.