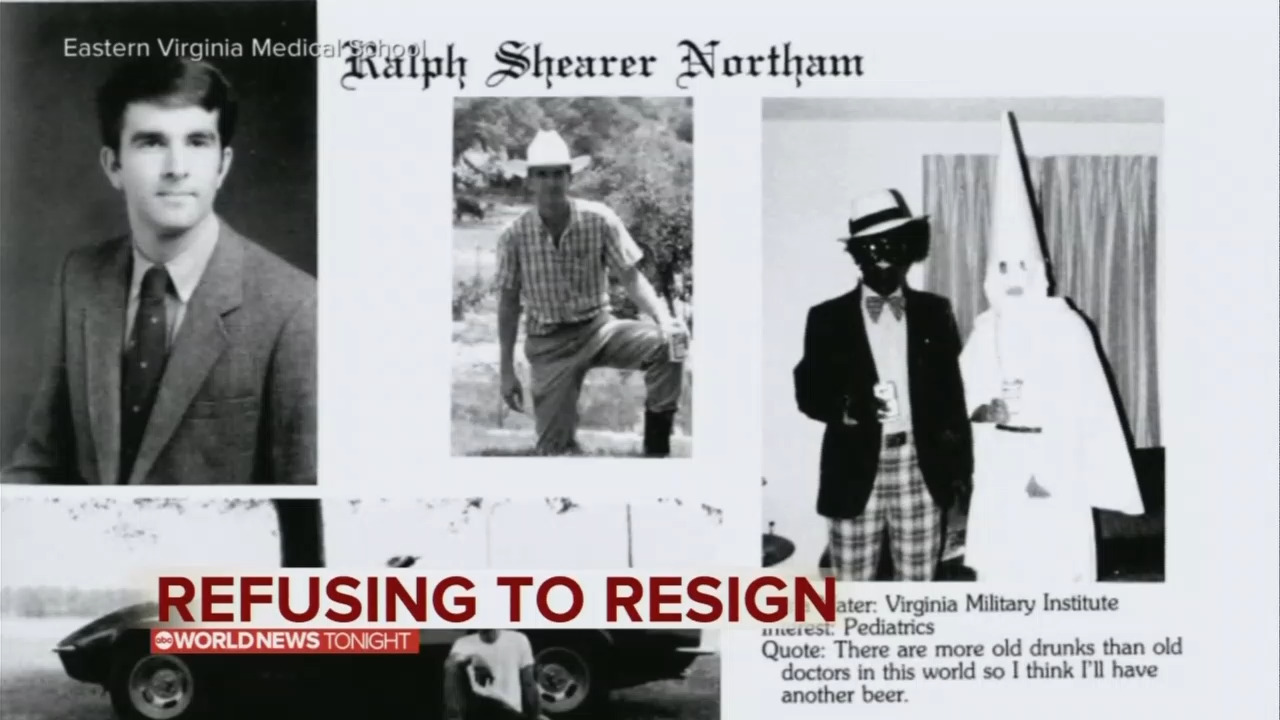 Modern Hollywood has never been so vocal.

Name the venue, and a star or starlet is there, promoting a crush of causes. It’s inescapable, from climate change to “Hitler 2.0” AKA President Donald Trump.

The recent Grammy Awards, minus former First Lady Michelle Obama’s appearance, miraculously went off without a political rant. It’s the exception that proves the rule. Just wait until the Feb. 24 Oscars ceremony. The rich and famous will likely play catch up for three-plus hours.

Yet these same voices, loud and proud in our digital age, are mostly mum on three troubled politicians.

Lt. Va. Gov. Justin Fairfax is credibly accused of not one but two sexual assaults.

Rep. Ilhan Omar (D-MN) is a new face in D.C. but she’s already piled up an impressive list of anti-semitic tweets. She had to apologize for her latest hate Tweet.

You can imagine what you might hear next from Celebrity Nation: “They must resign! Racism cannot be tolerated! We must squash anti-Semitism before we head toward another Holocaust!”

And, of course, “Believe all women!”

In reality, we heard mostly silence. The hypocrisy, on the other hand, is deafening. Do we need to really explain why? Look at the letter affixed to their names.

When President Trump picked Kavanaugh for the highest court in the land Hollywood rallied en masse in protest. They clung to the flimsiest of sexual assault allegations against him dating back decades.

The stars chanted, Believe All Women, using every platform at their disposal to stop his nomination. They failed, but not for lack of trying. 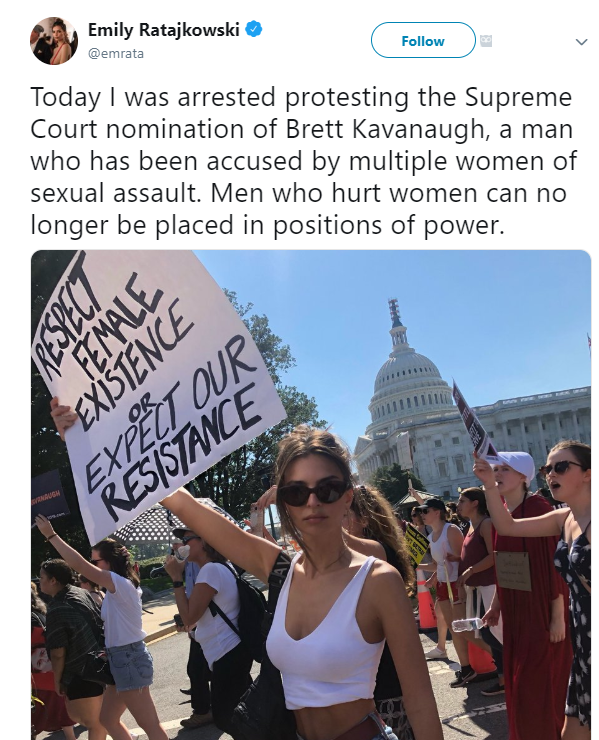 Saturday Night Live even mocked Kavanaugh, a man who, if innocent, did all he could to salvage his good name.

Has any star spoken up about Fairfax’s situation? Do they believe his accusers?

The far-left Deadline.com published a story about Hollywood’s “reaction” to Northam’s blackface imbroglio shortly after it broke. The story only cited Alyssa Milano, the liberal actress who unequivocally demanded the governor resign, and conservative star James Woods.

Give Milano a soupcon of credit for speaking without hesitation. The same holds for Halloween star Jamie Lee Curtis, who defied the celebrity trend. 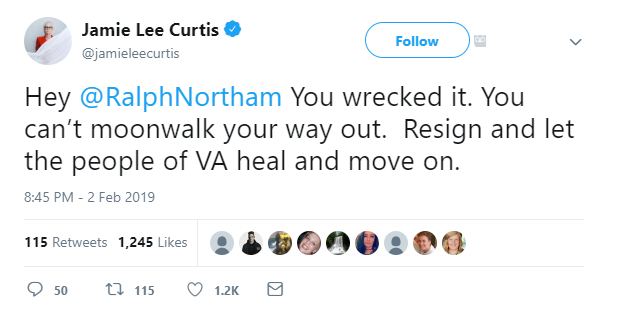 Otherwise, Hollywood stars let the news cycle go on without much comment.

When Megyn Kelly discussed the possibility that blackface costumes could be appropriate, she found herself on the unemployment line. Comic Patton Oswalt poured salt on her career wound. 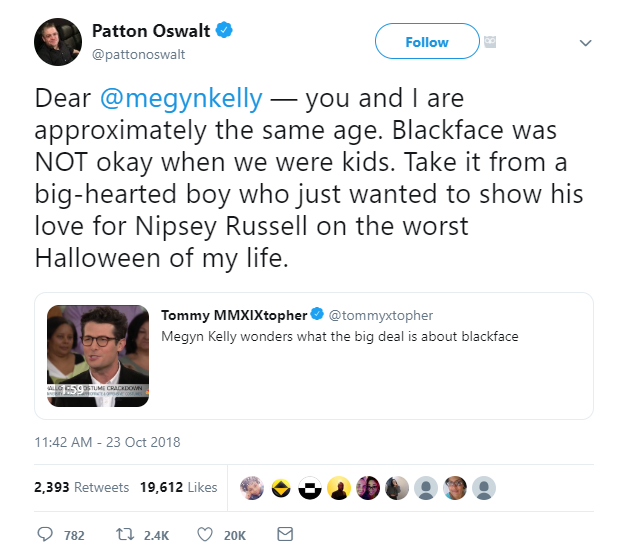 Meanwhile, woke late night comics have yet to touch Rep. Omar and her history of anti-Semitic comments. Comedian Sarah Silverman didn’t chastise Omar for her hate.

She praised her instead. 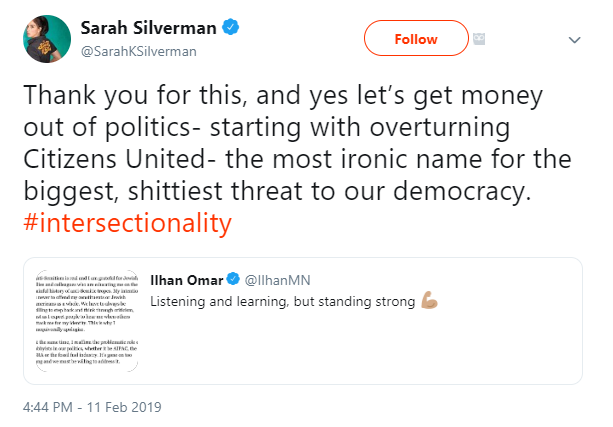 Now, these situations aren’t Apples to Apples. Virginia’s Lt. Governor isn’t nearly as powerful as Justice Kavanaugh. The principles should remain the same, though, assuming the outrage isn’t politically motivated.

If we have unabashed proof of racist tendencies, it should matter. If not one but two women accuse someone of sexual assault, the #MeToo movement’s “Believe All Women” mantra automatically kicks in.

And there’s no place in society, let alone Congress, for openly anti-Semitic Tweets. End of discussion.

NOTE: This reporter has been Googling the various names of politically active stars along with the aforementioned politicians with very few results. The same holds true with a series of Twitter searches.

It’s possible a few stars have spoken out about the issues in play. The larger point remains. While celebrities rise up to excoriate conservative figures they typically hold their fire when the parties are reversed. It’s just more hypocrisy from a crowd that claims the higher moral ground.