The Left Ruined the Oscars and Super Bowl; What’s Next? 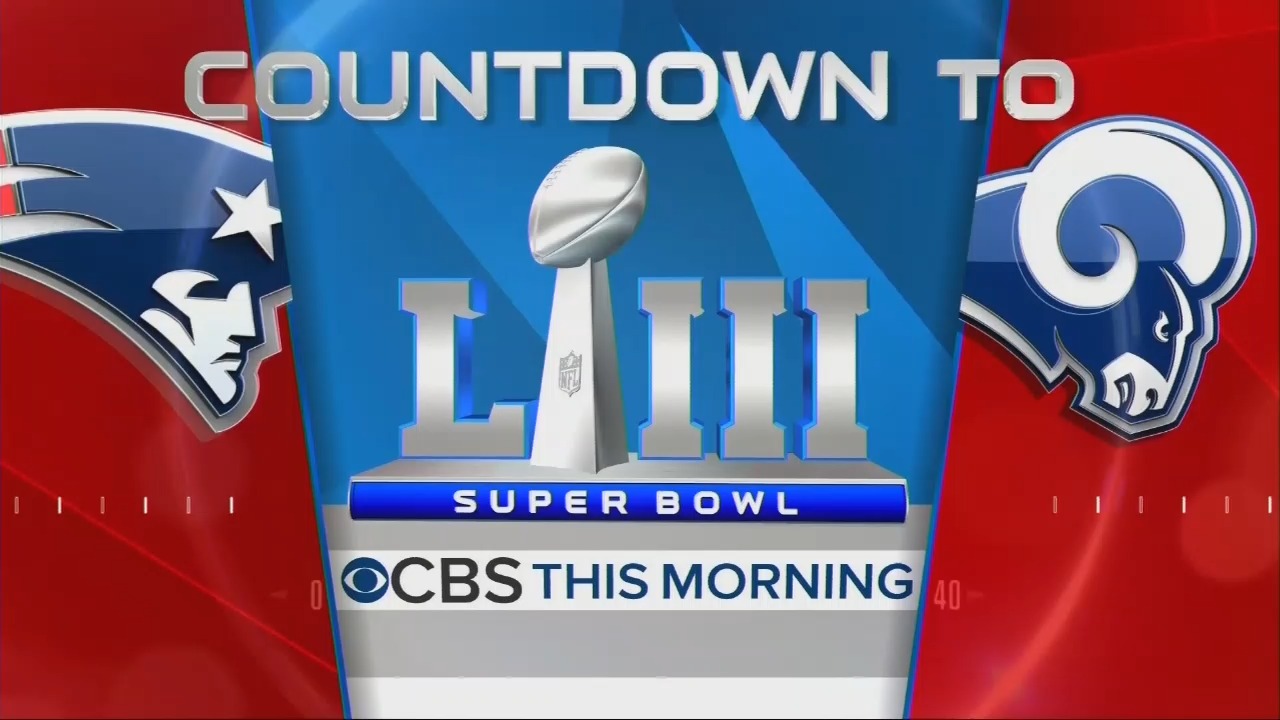 Maroon 5 got the gig of a lifetime, but the band would rather talk about anything else.

Adam Levine’s group will entertain millions midway through Super Bowl LIII at Mercedes-Benz Stadium in Atlanta Sunday. The musicians won’t chat up the gig prior to the big game, though.

The NFL said today that the group fronted by The Voice mentor-coach won’t take part in the pregame presser traditionally attended by the musical act chosen to play the once-sought-after Big Gig. The decision comes amid a backlash against the group tied to fans believing that Levine and Maroon 5 should cancel their performance in solidarity with Colin Kaepernick, the former NFL quarterback who launched the on-field kneeling protests and has been without a team in the ensuing seasons.

Maroon 5 suffered significant blowback for simply taking the job in the first place. The NFL scrambled to flesh out the list of half time performers, a slot that traditionally attracts the biggest stars in the world.

Think U2, the Rolling Stones, The Who and Prince.

We know Rihanna turned down this year’s show, citing the Kaepernick factor. Other stars likely did the same, but with less public fanfare. The NFL ended up hiring lesser known stars Big Boi and Travis Scott to join Maroon 5 on the big stage Sunday.

The latter band ended up announcing a $500,000 donation to Big Brothers Big Sisters of America “in partnership with the NFL,” this month.

Even non-singers got into the protest spirit.

Actress Amy Schumer took to Instagram to say she wouldn’t appear in any Super Bowl ads as a form of protest.

“I wonder why more white players aren’t kneeling,” Schumer wrote on Instagram. “Once you witness the truly deep inequality and endless racism people of color face in our country, not to mention the police brutality and murders. Why not kneel next to your brothers? Otherwise how are you not complicit?” 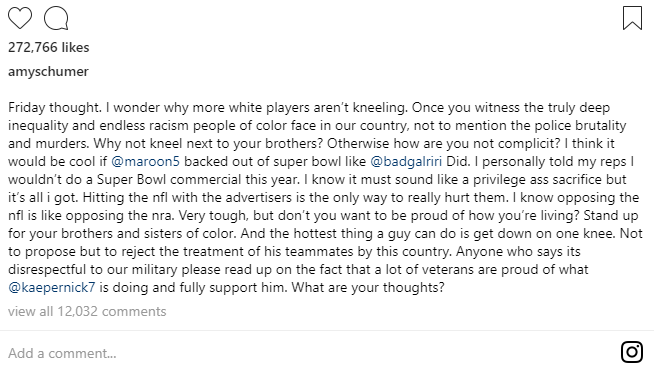 Does anyone think next year’s Super Bowl won’t similarly struggle to find musicians willing to face the far-left fire? Perhaps another social justice cause will replace the Kaepernick battle.

The former San Francisco 49ers QB last played in 2016, and the protests haven’t ebbed of yet. So this could carry on another two to three years.

Perhaps the half time show won’t even go on next year, a la the White House Correspondents Dinner. That annual soiree killed the comedy portion of the evening after woke comic Michelle Wolf’s mean-spirited routine.

Today, lesser celebrities like Tina Fey publicly turn the gig down. Others likely say the same in private.

It’s why the Feb. 24 gala will go host-free for the first time in 30 years. Comic superstar Kevin Hart had the hosting gig for all of two days before the Left demanded his ouster due to homophobic jokes told eight-plus years ago.

His subsequent apologies didn’t satisfy the Social Justice crowd. They wanted a celebrity scalp, and they got one.

What’s the next massive event to feel the Left’s fury? Will Valentine’s Day be deemed part of the patriarchy? Sounds silly, right? Would anyone have imagined five years ago that the Oscar producers couldn’t find a comedian to host the event? Or that the Super Bowl Half Time Show would struggle to flesh out its talent roster?

Why do the Oscars and Super Bowl even matter?

“The Super Bowl is really the last water cooler event we have,” said Mark Wenneker, chief creative officer US of MullenLowe, the firm behind the memorable E-Trade spot during last year’s Super Bowl.

“There aren’t a lot of moments we have like that any more. The Oscars is close but it’s not the same.”

That’s even more true considering our fractured times. Would it be nice to put aside our differences and watch a great game of football?

The Left won’t stand for it.

At some point even hardcore football fans may thrown in the Terrible Towel.

Dennis Prager routinely says everything the Left touches it ruins. We’ll just have to wait and see what cultural institution it torches next.