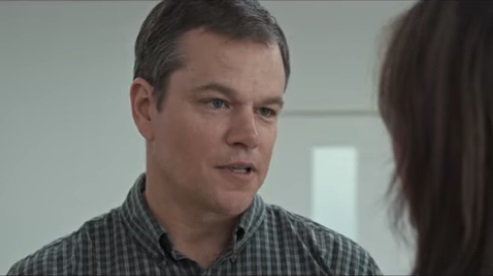 Matt Damon is having a lousy year, and that has nothing to do with his awkward comments regarding the “MeToo” movement. Damon’s performance in Suburbicon appeared to be a career low, bringing nothing to the role of a Father Knows Best type gone south. That was a revelation compared to his work in Downsizing.

Hollywood’s latest eco-hysteria screed starts with significant promise. Then, the movie meanders, making us wonder where this once intriguing story may head. By the time we learn the answer is “nowhere” it’s too late. We’re mired in one of the worst movies of the year.

It’s dubbed “cellular reduction.” In layman’s terms, it’s a device that shrinks people to a fraction of their normal size.

Smaller humans use less resources. Money. Energy. Water. You name it, a dramatically smaller person needs less of it. And, at a time when overpopulation and climate change threaten the globe, this could be the game changer to save our species.

See where this is going?

Only you don’t have to sport an Al Gore tattoo to be mesmerized by “Downsizing” (so far). Director Alexander Payne (Sideways, The Descendants) pays close attention to the details behind the faux technology and its shock effects.

For example, doctors must remove a person’s fillings before the shrinking process begins. You don’t want to see what happens when a human shrinks around metal resistant to cellular reduction. That’s clever, and the kind of observation that makes a fantasy like this pop. The film’s visual snap is equally sharp without any gaudy FX theatrics.

Payne is taking a wacky scenario seriously, making sly social commentary along the way. The perks of shrinking are massive. Your modest nest egg is now huge. No more struggling to pay the bills. You can live like the one percent overnight, a wink-wink slam on middle class types longing to be the “lazy” rich.

And then the story kicks in, or rather trudges onto the screen and sets up camp.

Audrey opts against the shrinking process at the very last minute. Now, a shrunken Paul must start his life anew in a community brimming with similarly sized souls. What happens next? No story spoilers here. Just know you’ll start out disinterested and rapidly grow bored.

We soon meet Ngoc Lan Tran (Hong Chau), a cleaning woman who Paul bonds with in ways that make no sense. Her character’s shrill voice and broken English will make even those resistant to snowflake observations play the Racism Card.

She’s also grating and wildly unlikeable, yet she factors significantly into the story. What an awful decision.

There’s also a larger story connecting the scientists who created the shrinking methods to the future of mankind. We think.

The story’s eco-lecturing waxes and wanes without grabbing us by the collars. It does find time to waste, if not completely embarrass, two-time Oscar winner Christoph Waltz in yet another terrible role.

Is Quentin Tarantino the only filmmaker who knows what to do with Waltz’s outsized talent?

The final act is such a catastrophe it’s like a HuffPo blogger with no film experience took over. We’re also asked to buy the least probable romance in modern screen history. Two cigar store Indians leaning atop each other would set off more sparks

The screenplay offers a few mild surprises, poking fun at arrogant scientists a time or two. For a moment Payne might even be mocking climate alarmists.

“All that crap about saving the planet. It’s about saving yourself,” one newly shrunken fellow says while pitching the process to Paul.

There’s even talk of a wall and shots of the poor living on the other side of it. Payne’s observation that an underclass will form in virtually any new societal structure is interesting. It’s another nugget that gets lost in the drab narrative.

It’s easy to say Downsizing isn’t Damon’s fault. What actor could shine in this slop? The perennial A-listers have a sturdy sense of the projects that will keep their star shining brightly.

Between Downsizing and Suburbicon Damon’s star has never been dimmer.