How the Media Bullied Jimmy Fallon Into Hating Trump

Jimmy Fallon has a funny way of approaching his late night gig.

The former Saturday Night Live star thinks it’s all about making people laugh at the end of the day. It’s not divisive, or corrosive. The “Fallon” method treats guests like … guests. Politics are fair game, but it’s not what matters most.

Everything changed at that point … for the media.

Fallon didn’t just treat Trump like any other presidential contender during that interview. He “normalized” Trump, using the modern left’s parlance. No hardball questions. No outrage over Trump’s campaign antics. And he did the one thing that enraged liberals the most. Fallon playfully tousled Trump’s hair.

The horror, the horror.

What happened next? Liberals savaged Fallon for his actions.

And so did the mainstream media.

Many sites reported on the left’s outrage over the incident. That’s a convenient way of making a news story out of Twitter reactions that fit the liberal media’s agenda.

Other sites did the heavy lifting internally. Variety called his integrity into question, later blaming Fallon’s ratings stumble on that hair tousle.

U.S. News wondered if Fallon should have been tougher on Trump. The Atlantic called the interview “the embarrassment of Jimmy Fallon.” New York Times arts critics wondered about the morality of the interview. 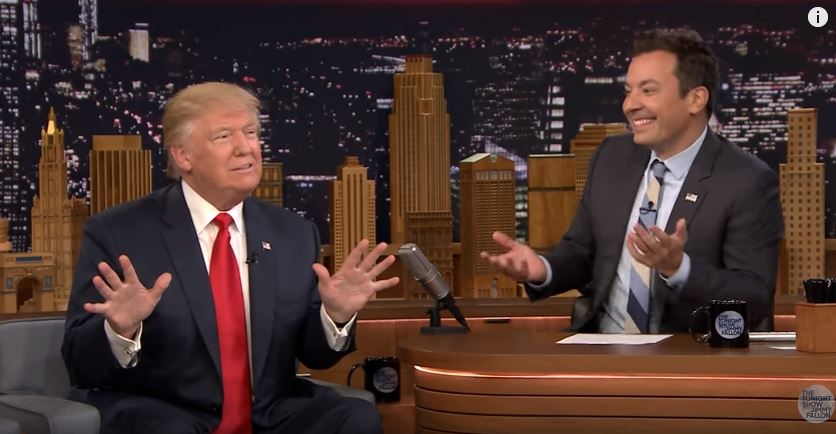 The hypocrisy is stunning. But like a puppy cowed into submission by his master, Fallon is finally playing by the media’s rules.

Here’s Fallon desperately trying to spin his actions to the press.

“I didn’t do it to humanize him…I almost did it to minimize him. I didn’t think that would be a compliment: ‘He did the thing that we all wanted to do.’”

One reason Fallon is spinning so hard boils down to ratings. His Tonight Show is suddenly trailing The Late Show with Stephen Colbert. That has everything to do with Colbert’s nightly attack on Trump, which has energized half the country into watching his monologues. 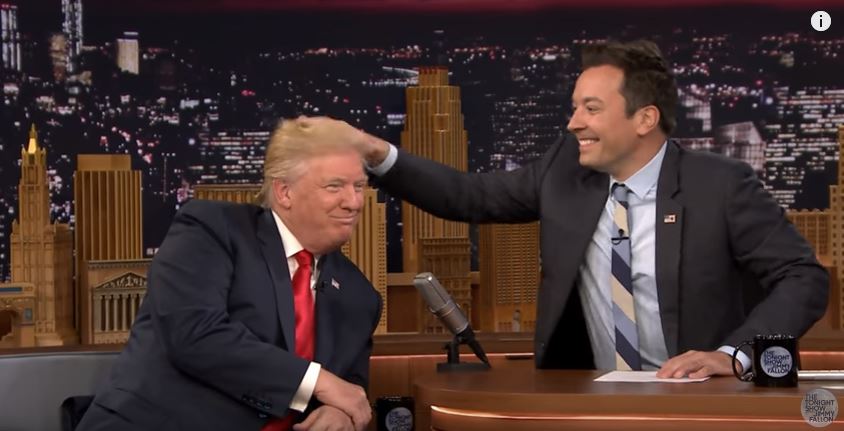 Still, The Tonight Show still hangs on to its demographic strengths. That means it isn’t time for Team Fallon to panic. Fallon won’t get out from under all the negative press, though, unless he commits to a full mea culpa … and course correction.

It’s a dicey strategy, though. Late night TV is a long game, and Colbert’s antics may cost him down the short road.

Still, Fallon is doing his best to apologize to his media masters. And it’s working.

Here’s a new headline from the overtly progressive Daily Beast about Fallon’s “Come to Trump” moment:

Jimmy Fallon Finally Mans Up and Goes After Donald Trump

The reporter quotes the Times piece where Fallon said, “I don’t want to be bullied into not being me, and not doing what I think is funny … Just because some people bash me on Twitter, it’s not going to change my humor or my show.”

"The Washington Post reports that some White House staffers have already started looking for other jobs,” he continued. “A lot of them have posted their résumés on the job-hunting site, ‘IWorkedForAMonster.com.”

It doesn’t even sound like something Fallon would say. But he did. Its like he’s been Colbertized.

Reporters didn’t get Fallon fired for his “outrageous” September interview. It did something even better, by their standards. They digitally beat him into submission. And sent a message to any other late night comic. Bash Trump, or you’re next.

It will take plenty of time—and hard work—for Fallon to win back the affections of those he lost post-Hairgate, and many of them may be gone for good. But at least now he is on the right track.

At a time when every other reporter fears the new Hulu drama The Handmaid’s Tale reflects our new totalitarian age, this groupthink coercion is genuinely scary.