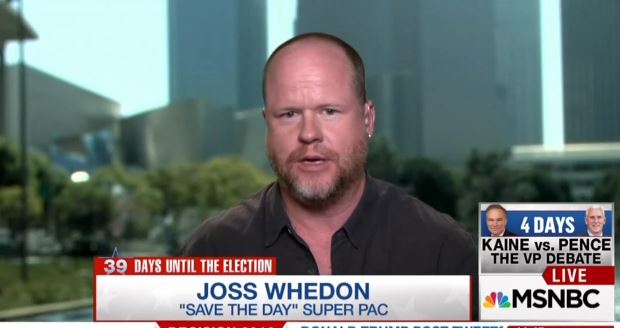 Is this the most outrageous Trump-related Tweet to come out of Hollywood so far?

The #resistance has no greater friend than Joss Whedon.

The director of The Avengers is one of Hollywood’s most vocal critics of the Trump administration. He did all he could to stop the real estate mogul from becoming president.

He directed the infamous “Save the Day” voter PSAs from 2016. Whedon leaned on his celebrity rolodex to caution voters against Trump. The star-studded ad featured Robert Downey, Jr., Don Cheadle, Julianne Moore, Mark Ruffalo and other A-list actors.

It didn’t work, despite Whedon spending $1 million of his own cash to bankroll the videos.

Now, he uses Twitter to warn the masses about potential abuses of presidential power … and more. It hasn’t always gone smoothly.

A few weeks ago he admitted the fight against Team Trump had left him “broken.” Since then, he’s resumed his political messaging. Thursday's Tweet, though, could be his most aggressive statement yet.

He linked to a story about gay people reportedly being killed simply for their sexual preference.

Authorities in the southern Russian republic of Chechnya have reportedly kidnapped dozens of gay men in the past month and killed at least three as part of an roundup ordered against LGBT people there.

As horrific as that sounds, Whedon suggests it could soon be worse for gay people stateside. 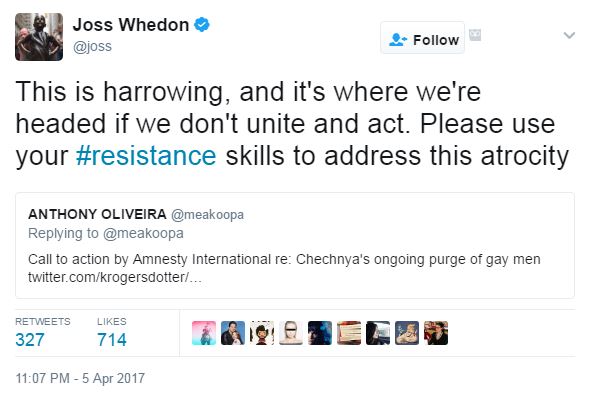 For the record, Trump has been more open to the LGBT community than other GOP leaders. He reportedly appointed an openly gay man, Rick Grenell, as a NATO ambassador. He leans on adviser Peter Thiel, the openly gay co-founder of PayPal. And Trump told CBS late last year he was “fine” with same-sex marriage being legal in the U.S.