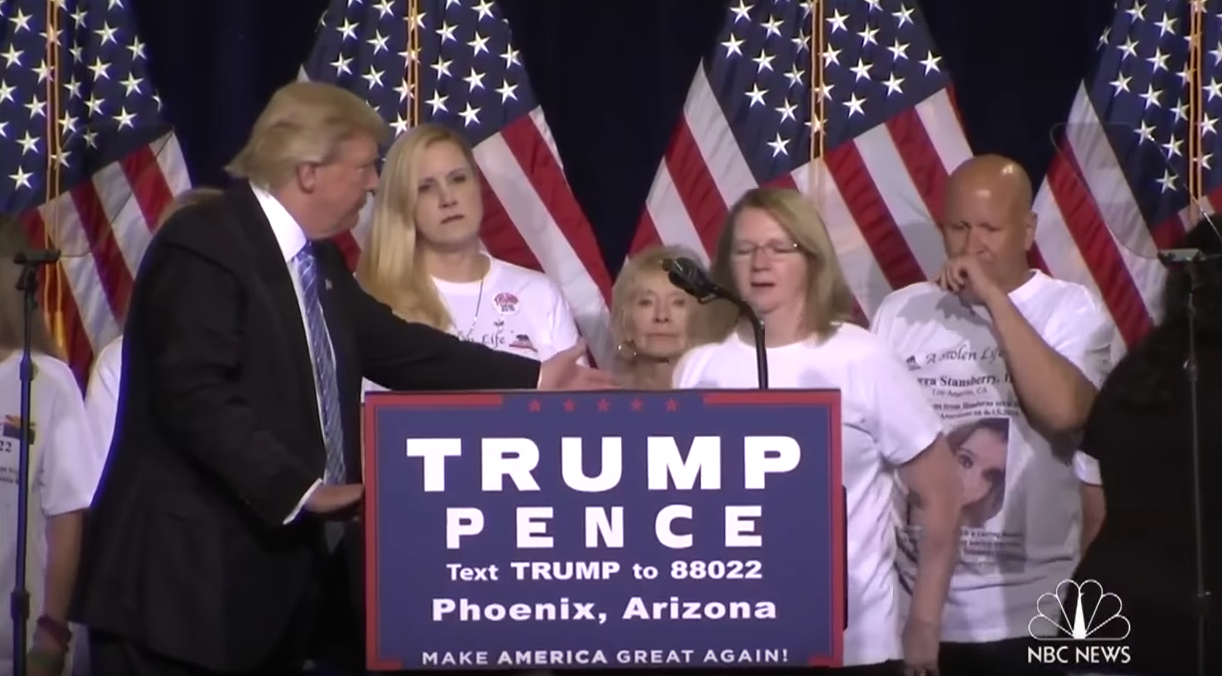 On Friday, The Washington Post published a purported "news" article that gushed over Laura Calderwood for her continued political and personal support of illegal aliens even after her daughter Mollie Tibbetts was allegedly raped and murdered by one earlier this year. Although most of the Post’s piece focused on Calderwood’s adoption of a teenage boy who was a close family friend and relative of Tibbetts’s accused killer, parts of it were also dedicated to demonizing parents who have responded differently to their children’s murders by illegal immigrants.

The Post’s story — titled “Trump used her slain daughter to rail against illegal immigration. She chose a different path” — was written by “social issues” reporter Terrence McCoy. As the title suggests, McCoy’s piece did spend some time criticizing Trump as an opportunistic exploiter of Tibbetts’s death, but the reporter devoted far more space to attacking angel moms and dads as hateful and obsessive racists for supporting stricter enforcement of immigration laws and harsh punishments for their kids’ murderers [emphasis in bold mine throughout]:

The stories almost always begin the same way. A son or daughter is dead, and an undocumented immigrant is blamed. Aggrieved and adrift, the parents search for meaning in it all, some finding what they can in obsession and hatred. “In my life we’re going to find the trash who killed my kid,” said Scott Root of Council Bluffs, Iowa, whose daughter, Sarah Root, 21, was killed in 2016, allegedly by an undocumented drunk driver who was released after partially paying bail, then disappeared. Others find meaning in political transformation. “I became a Republican,” said Sabine Durden of Mineral Springs, Ark., whose son was killed by an undocumented immigrant in a traffic collision. And still others in activism: “My story needed to get out,” said Laura Wilkerson of Pearland, Tex., whose son, Josh Wilkerson, 18, was beaten to death in 2010 by an undocumented immigrant.

Then there is Laura Calderwood. Fifty-five, with curly blond hair and a halting gait, she is a lifelong liberal who didn’t abandon her politics. She feels anger like the others, but not toward an entire group of people. She’s not afraid of the demographic change remaking the country. But she does fear the deepening polarization. So she never goes to political rallies — never speaks publicly — because she believes that would just inflame things. Instead, she tries to live every day, including this one, just as she did before it all happened.

McCoy, apparently not clear on why people would oppose their children being raped and/or killed by criminal aliens, also portrayed Iowa Governor Kim Reynolds (who is a Republican) as heartless and unempathetic for publicly calling Tibbetts’s alleged murderer a “predator”:

The landscape on the drive home was a rolling splash of dull browns, marked by election signs, including one for Republican Gov. Kim Reynolds. She had taught Laura everything she needed to know about politics.

The day it was broadcast that Mollie was found, Reynolds called and wept with her on the phone. Laura had been moved by her tenderness — and still was — but then, on that same day, Reynolds issued a public statement. Gone was the empathetic woman from the phone call and instead was someone now using the words “predator” and “broken immigration system.” The next statement was even harsher, this one from Trump. He’d never called Laura, knew little about her daughter, but had no problem, Laura thought, using Mollie’s death to try to end immigration policies he now referred to as “pathetic.”

In addition to identifying with Laura’s plight, which is understandable, McCoy was strangely sympathetic to Tibbetts’s alleged rapist and murderer, writing positively about Calderwood’s gradual progression towards believing that he might not be such a terrible person after all.

Calderwood has reportedly been in the process of evolving this stance because of the teenage boy Ulises Felix, whom Laura adopted after Tibbetts’s death to support the local illegal alien community. According to McCoy’s report, Ulises and his family enjoyed an extremely close relationship with the alleged killer before the murder. This was due in no small part to the fact that the alleged murderer is the father of Ulises’s cousin’s daughter:

“He was a pretty funny dude . . . always messing around,” Ulises casually said of Bahena Rivera one night, and Laura just listened, looking down as she cooked.

“My mom took care of him for a while, and she fed him every day,” he said one evening. “He was so busy sending money back to his parents, trying to help them build a house.”

“The only family I know that he had here was his uncle and aunt.”

“I mean, that’s . . . ,” she began, searching for the right thing to say. “I’m glad he had someone as a mother figure to look after him,” she ultimately got out, referencing Ulises’s mother, struggling to show compassion. “If he didn’t have any family here to speak of.”

She then left the room, saying, “I’m going outside.”

The night was cold and quiet. She lit a cigarette, breathed in. Was what Ulises said true? But how could it be? She never wanted to think — or anyone else to think — that Bahena Rivera was somehow decent. She wanted to picture him only as that federal agent did: without conscience. Deport him? Execute him? Too easy. He needed to spend the rest of his life in prison, deprived of seeing his daughter, just as she’d been deprived of seeing hers. Justice to her would be waking up every day knowing that he was in pain. And now to hear something redeeming about him? It made her feel uncomfortable and unmoored.

So ultimately, after considering all the facts of the story, The Washington Post ended up concluding that:

2) Angel moms who support Trump or his political policy prescriptions are hateful racists.

3) The probable rapist and murderer who stabbed a young woman in the head and left her to rot in a cornfield might be a good guy at heart.

If these are truly the fruits of democracy, I think I prefer darkness.

You can read the Post's piece in full at this link.