After nearly three hours of hyperventilating about President Trump’s purported comments last Thursday describing Haiti, El Salvador, and African countries as “shitholes,” Monday’s Morning Joe brought on author and NBC Political Analyst Anand Giridharadas to discuss Trump’s “radical,” “reactionary,” and “racist” comments. Predictably, Giridharadas did not have many kind words for the President, declaring that it was, in fact, America that was being turned into the “real s-hole” by Trump.

Co-host Joe Scarborough set up Giridharadas by proclaiming that Trump is a “tyrannical president” who congressional Republicans are letting run wild:

GIRIDHARADAS: That's exactly right. And, and today is Martin Luther King Day. I think we should pay attention, um, to that extraordinary man's extraordinary words. And I wanna call your viewers' attention to one particular piece that he wrote–the “Letter From a Birmingham Jail”–um, in which he talked about his grave disappointment with what he called “the white moderate.” Um, and the heart of his point was that good people, good, decent, but silent people are the wind beneath evil's wings. And so yes, I agree fully with Max Boot, we have a, a man child who is deranged and racist in this office. But it takes a lot of other silent people to go along with it. And we're seeing those silent people in Congress. We're seeing CEOs who want a slight corporate tax reduction and are therefore willing to stomach and say nothing about what in private dinner parties they will tell you they deplore. Uh, we are seeing all kinds of people who for small, personal, trivial gains are willing to see their country turned into the real s-hole.

Giridharadas’s statements tracked very closely with Stephen Colbert’s comments last week on his late-night talk show joking that America is a “shithole” country because Trump is our President, the main difference being that Morning Joe is not supposed to be a comedy show.

Below is a transcript of selected segments from Monday's Morning Joe about Trump's "shithole countries" comments:

JOE SCARBOROUGH: But Jon Meacham, let me begin with you. Um, history does, does not always go in straight lines. Uh, I do think, though, historians 30 years from now will be shocked that America has moved as much as we've moved since the life and death of Martin Luther King Jr.. Um, we elected Barack Obama, uh, who won two majority victories. I guess the last, the last president to, to do that, um -- my god, maybe it was Eisenhower? Um, and yet it's followed with a president who is reactionary and radical and, I would say, uh, judging by his words and his deeds, racist. Um, how do, how do historians handle this 30 years from now?

JON MEACHAM: Well, we have a recurrent and tragic tendency in the American soul to fear rather than to hope, uh, to point at people instead of looking ahead. Uh, it was said years and years ago that the American dilemma is race. Uh, Du Bois said that the problem of the 20th century in America is the problem of the cover l-, color line. Question is, and the, the, the tragedy of the, of the current moment that you're describing is we thought that that was the problem of the 20th century. Self-evidently, it’s, it continues to be a problem into this our fourth century, uh, as, as a country if you count the colonial experience. Uh, you're right about history being long. Uh, Dr. King used to quote, uh, paraphrase Theodore Parker, the great abolitionist from the mid-19th century who said that the arc of a moral universe is long, but it bends toward justice. And that's the hope we have to dedicate ourselves to on days like this.

SCARBOROUGH: And I do believe it does. Uh, that arc, Eddie, uh, does bend towards justice. It certainly has over the past 30, 40 years. And of course, it was Ronald Reagan who won two, uh, the, the last two landslides. Now, um, I loved Reagan. Uh, and Reagan was an optimist, um, but Barack Obama also an optimist. And Eddie, that's why when you have presidents like Reagan and you have presidents, uh, like Obama, uh, that is America bending, uh, eh, eh, eh -- are choosing hope rather than fear. But right now, we have a president who, again, every chance he gets, seems to burrow down, be reactionary and seek approval from a third of the electorate.

EDDIE GLAUDE JR.: Yeah. He's, he’s constantly appealing to his base. Yeah, I think he, instead of appealing to our better angels as Abraham Lincoln would have us, or had us do, uh, he appeals to, he appeals to our darkest fears. Um, I think it's important though -- we need to remember, uh, Joe, especially on this day, the kind of racial animus that, that attended, uh, the eight years that Barack Obama was in office, the racial tensions that emerged, uh, the energy and, and, and in some ways the dark, dark undertow of the Tea Party, the unleashing of voter suppression efforts during that eight years. We also need to remember how, uh, incredibly, uh, polarized the country was when Ronald Reagan was elected. Uh, you think about Jesse Helms and what they were doing in the Senate when we were, when they were trying to pass, uh, the legislation for the Dr. King holiday. Uh, what Jesse Helms and others were saying, you can think about that kind of energy and, and, and reaction to Pres-, uh, President Reagan announcing his preside-, presidential run in Philadelphia, Mississippi and claiming states rights as his orientation. Uh, there was a lot of racial tension then. Uh, there was a lot of racial tension during, um, Barack Obama's tenure and we have racial tension now. And part of -- you know, I was thinking just earlier to this morning about a quote from Ralph Ellison, the, the great American novelist. He said Americans are notoriously selective in our exercise of historical memory, and it's our ongoing forgetfulness of how, as Jon Meacham said, uh, the, the original sin of racism continues to haunt the country, that keeps us on this hamster wheel. And here we are now dealing with the latest consequence, and that's Donald Trump. 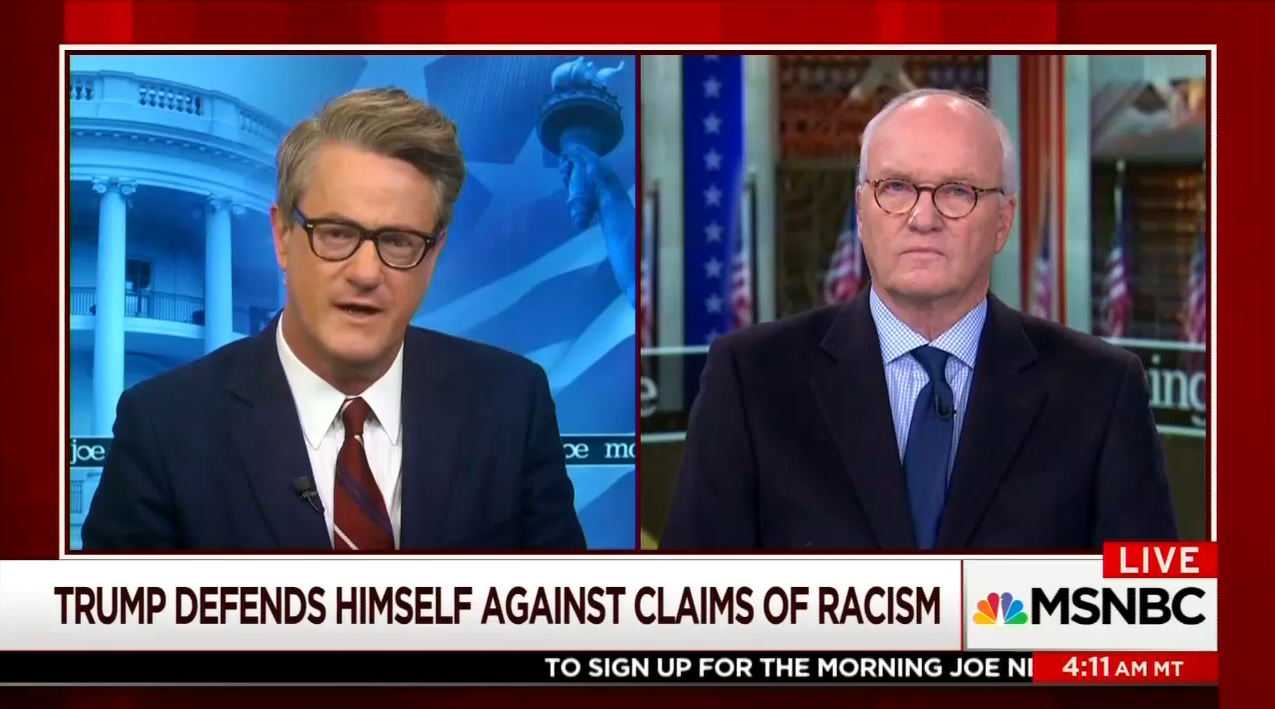 SCARBOROUGH: And, Mike, um, there are -- and this is, this is an ongoing debate between Mika and myself. Uh, I look at Donald Trump and I look at the horrors of Donald Trump's presidency, uh, his, the violence that he does to constitutional norms, the contempt he has for the rule of law, the Stalinist phrases that he trots out when, uh, he, he speaks about the free press that our founders saw as really the cornerstone of the Bill of Rights. Uh, and yet, I look at how so many of those institutions have responded to this. Uh, and, and I am hopeful from what I've seen so far about how Americans are responding to this great challenge. Uh, we seem to be responding, I think, so far, uh, with passing grades as a country for a man who understands America and understands American values even less than he understands what's going on around the world and America's place in the world.

MIKE BARNICLE: Yeah, Joe, this is a, uh, a sobering and necessary discussion that we're having right now because I would submit that we as a country, collectively as Americans, have never been here before, where we are today. We've never been in this position. This is a country, this is a republic, uh, created and born with the scab of racism on it due to slavery, due to people being brought to this country in chains as slaves. And every president that we have had, even many whom people disagreed with politically, including Richard Nixon by the way, have [sic] always reverted to the principle focus of a presidency, and that is to bring a country together in times of strife, in times of trouble or conflict, real or potential, with the exception of one president–this president, the incumbent president, who goes out of his way to provoke and tear at that scab of race, to tear at that scab that creates divisions in this country rather than bringing the country together. And so, as David Ignatius just said, it is up to us as individuals, as Americans, to stand for the character, the morality, and the reputation of who we are as a country and who we are as individuals. But we have never, ever been here before.

SCARBOROUGH: There is such, such a change generationally that I have seen over the past 10, 15 years, uh, of, of, of younger Americans, uh, and it, and political party just doesn't matter, rejecting racism, rejecting, uh, xenophobia, rejecting the close-mindedness, the sort of close-mindedness, uh, that, that this president unfortunately, uh, brings to his job and sends out to the American people every day. A hard rain is going to fall on Donald Trump and the Republicans who enable this sort of racism. And it's coming.