Couric and DeGeneres Tell Women: Don’t Be Beauty Queens Like Us 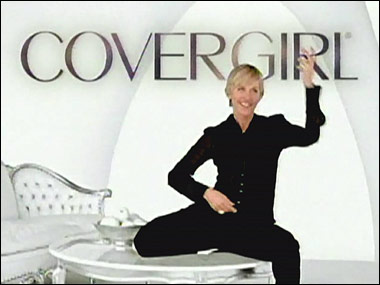 During a web-only interview with CBS's Katie Couric to promote her new role on "American Idol," comedienne Ellen DeGeneres went on a rant about our sexist culture that demands women look more attractive than men.

There's just one problem: DeGeneres is the face of Proctor and Gamble's famous makeup line CoverGirl. In fact, she even appeared in a well known commercial saying, "Inner beauty is important -- but not nearly as important as outer beauty."

Too bad a serious journalist like Couric didn't think to ask if DeGeneres's fans might get confused. Then again, The Perky One would have had to confront her own complicity in flouting short skirts on network news programs and giving condescending interviews to women like Sarah Palin.

Without regard to the obvious hypocrisy, Couric teed up the subject by asking if DeGeneres was concerned for women who "are so obsessed and worried and spend so much time thinking about their bodies." DeGeneres used the question to accuse American culture of a sexist double standard (video embedded below the fold with partial transcript):

ELLEN DEGENERES: It's a double standard because, you know, there are men with really beautiful women that don't have great bodies. And yet nobody's saying anything about that. The focus is all - and I think a lot of men still have that body image thing, I'm not saying men don't, a lot of men do. But it really is mainly, women need to keep themselves up to look good for either a man, for whatever, it's just for society. And it's just, it's not fair. [...]

The way that magazines airbrush everything, women are looking at bodies like that going, ‘my stomach doesn't look like that. I'm supposed to look like that?' And so they starve themselves and they work out like crazy and it's all so, it's not important. I just think we put the wrong emphasis on what beauty is and what health is.

It's common for celebrities to endorse frivolous products, but given the weight of such a serious subject and the striking contrast of her public pronouncement, it seems awfully hypocritical; the perfectly petite Couric offered no objection.

Disorders like anorexia are indeed a major issue for American women. A study by the SC Department of Health recently found that some 7 million women suffer from eating disorders, and 80% of girls as young as 13 have tried dieting of some nature.

Yet perhaps the reason for this is not because of domineering men. Maybe girls feel pressure to look better because their Idols like Ellen DeGeneres tell them to.

For a sense of the true contrast, observe DeGeneres using her endorsement of CoverGirl to persuade women to buy more makeup:

With female role models like that around, who needs piggish men?

Sadly, the hard-hitting news anchor Katie Couric went right along with the rant, even piping in herself to bemoan the unhealthy lengths some women go to.

Meanwhile, as NewsBuster Ken Shepherd exposed Thursday, Couric is currently featured in Harper's Bazaar bragging about her shapely legs that helped her succeed in broadcasting. No word on whether a fat girl might starve herself to have legs like Katie Couric.

A huge cornerstone of liberal doctrine is that men pressure women to look appealing as a means of being accepted. Yet the loudest voices actually come from famous women like DeGeneres. They are the ones who populate those airbrushed photos in magazines, the smiling faces selling one more tube of mascara, the glamorous bodies in size 2 dresses that walk across the red carpet at the Oscars.

Girl Scouts USA performed a recent survey of girls age 13 to 17 in an effort to learn exactly how much pressure they felt. A whopping 89% claimed the fashion industry pushed them to attain unrealistic looks - and one in four believed it was okay to take diet pills to look like their favorite role models.

Men are not driving the image of the fashion industry, and if a designer does expect too much of his models, women have only themselves to blame when they work for him anyway.

It is clear that we are losing the fight for girls' self-esteem, but it will take more than lip service in a promotional interview to turn the tide. When faced with two thin, attractive, makeup-laden women in designer clothing telling them not to focus on appearance, it's hard for females to understand just what message is being relayed - especially if those women appear moments later selling beauty products on TV.

DeGeneres deserves credit for criticizing our materialistic culture, but her words would have a much bigger impact if she were brave enough to appear in public looking like a normal woman.