For years Northern Ireland has been a safe space for the unborn. With tight regulations on abortion in place, Irish children enjoyed protection that unborn Americans could only dream about. Naturally, writer Carmen Fishwick of the Guardian seized the opportunity to exploit women to propagate abortion in the Emerald Isle. The paper's headline? "Illegal pills and trauma: how Northern Ireland's abortion ban affects women."

Fishwick lamented that Northern Ireland has a much lower unborn body count than its neighbors.  “Just 23 legal NHS abortions took place in Northern Ireland last year, compared with more than 200,000 in the rest of the UK.” 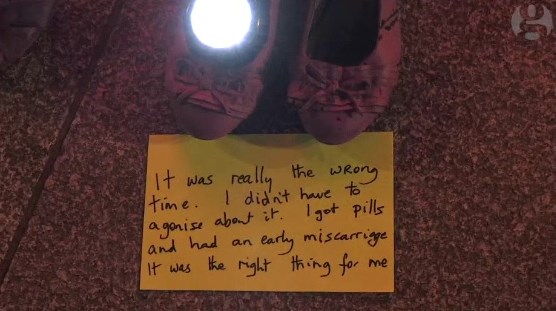 Yeah, Northern Ireland what’s wrong with you? You only killed 23 infants while the rest of the UK is already in the six-digit range? Get with the program! It's the usual feminist routine, a series of sob stories about frustrated, inconvenienced women.

First, Fishwick showcases one Emilia Campbell, who became pregnant with an unwanted child. When reading Fishwick’s description of Campbell’s situation it becomes apparent she is trying to milk as much drama as possible.

She knew she was facing a stressful decision: travel overseas for an abortion, seek out an illegal and potentially dangerous solution such as buying abortion pills online, or continue with the unwanted pregnancy. Although it would take her years to pay back the debt, she used her new credit card to pay for the journey from Belfast to London so she could have a termination.

She could have just given birth to the child and put it up for adoption. That way she could be free of this dreadful debt and be relieved of her motherhood obligations.

Fishwick’s deliberate omission of the adoption option, a common tactic among the pro-abortion press, surfaced again.

Clara from County Down found out she was pregnant in October. Already a mother to a young son, she did not want another child. But lacking the money to travel, she was left with no alternative but to terminate the pregnancy using abortion pills bought online.

Farrah, a 23-year-old woman from Derry, said attempts to end her pregnancy added significant stress to an already distressing time in her life. She became pregnant after a man refused to wear a condom during sex.

Are readers supposed to laugh or cry at this? If she wanted to avoid pregnancy she could have exercised her right to choose to deny sexual intercourse to anyone without protection. Or better yet, she could have waited until she was married and ready for children before doing anything.

In any case, Fishwick’s adherence to the pro-abortion orthodoxy would not be complete without using Farrah to indirectly invoke the “coat hanger” myth.

A lack of abortion services means that there are inadequate safe spaces for women to get advice on reproductive care causing many, including Farrah, to deal with terminations alone.

Were it not for the fact the NARAL co-founder Bernard Nathanson admitted that the pro-abortion lobby grossly exaggerated the number of deaths linked to illegal abortions, Fishwick’s lamentations might have been taken seriously.

Next, Fishwick used the case of one Sarah Gallagher to blame Northern Ireland’s traditional morality for the suffering of women. “The 45-year-old believes the stigma surrounding the procedure and the region’s narrow views on women’s sexuality and family affected her decision and significantly impacted her wellbeing.”

Northern Ireland’s restrictive rules are often the hardest for people lacking the financial means or the close support networks. Given women in Northern Ireland are unable to access NHS abortion services at all, the costs of travelling to a private clinic in England can be anywhere between £400 and £2,000. This depends on how advanced the pregnancy is, whether an overnight stay is required, and the method of abortion. These costs inevitably result in some women continuing pregnancies they don’t want, or seeking dangerous and illegal solutions.

So far Fishwick has played every typical pro-abortion journalistic trope in the book. However, she crosses an even bigger line by openly lamenting that Northern Ireland forbids the abortion of children on account of their genetic defects.

A high court judge ruled last month that Northern Ireland’s abortion rules breach the human rights of women and girls. But despite the ruling, there is no legal compunction on the politicians at the Stormont assembly to change the law to allow terminations in Northern Ireland for those who become pregnant through rape or incest, or are carrying a baby with fatal foetal abnormalities.

She then showcases some sob stories of women who had to make the outrageous pilgrimage out of country just to kill their children who dared to be born with “foetal abnormalities.”

This piece is indicative of the fact that for all its talk about human rights, the pro-abortion press sheds little tears over the execution of the most vulnerable of children.