On November 13th, the Supreme Court announced that it would weigh the constitutionality of Texas’ HB2 law, which mandates increased safety regulations for abortion clinics, and, according to its challengers, places an “undue burden” on women’s reproductive health. A mere five days later, several media publications including Yahoo.com, Slate, The Guardian, The Washington Post, and Reuters covered the results of a recently released study that claimed that anywhere between 100,000 and 240,000 women in Texas attempted self-induced abortions since the passage of the HB 2 law.

According to Jennifer Gerson Uffalussy at Yahoo.com,

A new study released yesterday (Nov. 17) by the Texas Policy Evaluation Project (TxPEP) found a significant increase in the number of self-induced abortions since the passage of HB2, the restrictive abortion legislative in the state that is now headed to the Supreme Court for consideration. The organization, part of the University of Texas at Austin, surveyed 779 women, 22 percent of whom say they themselves or someone they personally knew had self-induced or attempted to self-induce an abortion. If this rate were applied to the population of women of child-bearing age in Texas (ages 18 to 49) as a whole, that would mean that approximately 240,000 women in the state have attempted to self-induce or know someone who has. The women were interviewed between October 2014 and October 2015, and many of their stories are terrifying.

In her attempt to draw the connection between the TxPEP study and the pre-Roe v. Wade days, Uffalussy invoked the radical pro-abortion Dr. David Grimes. “Grimes says that…it is safe to estimate that four women a day died in American [sic] as a consequence of illegal abortion.”

Uffalussy never bothered to point out that this statistic, which would calculate to 1,460 female deaths a year, has been proven wrong years ago. 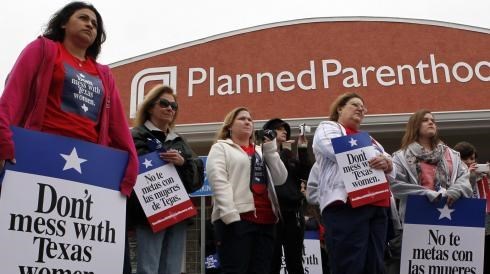 The Guardian provided more details on the study.

To determine the prevalence of self-induced abortions in Texas, investigators surveyed women and asked them whether they had ever tried to end a pregnancy outside a clinical setting, or if their best friend had. The best-friend measure was included because women tend to under-report abortions in studies.

Reuters reported that the study’s findings indicated that the “poor women bear the brunt of the law.”

While acknowledging that such things are not in play in today’s society, Sandhya Somashekar at the Washington Post was sure to recall the alleged “coat hanger” era before Roe v. Wade in their coverage of the study.

Self-abortion in the modern era is a far cry from the illegal back-alley procedures and "coat hanger" techniques that were common in 1973, when the Supreme Court legalized abortion in the landmark Texas case Roe vs. Wade.

Slate was much less restrained in its attempt to paint an apocalyptic picture.

Texas is giving us a vision of what our dystopian future might look like under a defanged Roe v. Wade.…TxPEP found that most would have preferred a clinical abortion, but found it inaccessible because of financial barriers or lack of nearby facilities had a hard time getting any reproductive health care at all, including Pap smears and contraception, reported abortion self-induction at significantly higher rates. This doesn’t bode well for the future impact of HB2.

Latina women living near the Mexican border and women who, due to cost or clinic proximity,  Increased wait times at Texas’ dwindling abortion-providing clinics will mean more second-trimester abortions—a grim prospect for everyone. And diminished access to clinics will push many women to risk bodily harm and terminate their own pregnancies rather than spend the time and money traveling across the state to find a doctor’s help.

However, none of the journalists bothered to investigate the integrity of the study or the background of its authors. Thankfully, LifeNews actually did the journalistic work.

In examining the numbers, LifeNews found an alarming discrepancy.

The numbers almost certainly are a gross exaggeration. According to the pro-abortion Guttmacher Institute, there were 73,000 abortions in 2011 in Texas before the laws took effect. The study’s estimates that abortions increased up to 240,000 after the pro-life laws were passed seems extremely unlikely.

Discrepancies in the research were also identified, particularly in relation to the question about reporting a “best friend’s” abortion.

And the questions about someone else’s behavior didn’t stop with best friends. Another 2.3 percent said they suspected their best friend or someone else they knew had tried to abort on her own. Eventually the researchers did ask the women if they themselves had ever tried to abort on their own, and 1.7 percent said they had. That gave the low estimate of 100,000 women. The women’s speculation about other women gave the high estimate of 240,000.

As for the people involved in this statistical lobbying piece, LifeNews found a history of anti-life activism among some of the researchers.

The University of California at San Francisco, which was involved with the Texas study, also published a study in 2013 advocating to allow non-doctors to perform surgical abortions and downplaying the high complication rates that they discovered.

Other reports indicated that some of the TxPEP researchers “came from Ibis Reproductive Health, where ‘increasing access to safe abortion’ is at the top of the agenda, as is their project to keep late-term abortion legal, called Later Abortion Initiative.”

Finally, LifeNews was quick to point out that even one of the TxPEP’s other studies dispelled the “coat hanger” myth.

“One hundred percent of the women in another small TxPEP study used misoprostol, other medications or herbs to try to self-abort. Not a coat hanger in the bunch.”

In the end this appears to be another example of the news media covering a study they like without critically analyzing it.

As long as this continues, the abortion lobby’s attempt to coldly exaggerate the number of impoverished women harmed by self-induced abortion for the sake of their own agenda will continue undaunted. Just like it did before Roe v. Wade.