No matter the occasion, the media always finds ways to either defend or throw a bone to the abortion industry. Case in point is Alex Ronan of New York magazine who interviewed "the first legal abortion providers" who “risked their livelihoods” to “break the law by providing terminations.”

Last year, Ronan proudly noted in the same outlet that “I’ve considered myself pro-choice since sixth grade when I learned the word, and I had manned the phones at the NARAL office in downtown New York when I was in high school.” So it was obvious she would elect to glamorize these early abortionists and their successors.

[T]hey began providing abortions before Roe or in the five years immediately following the ruling of January 15, 1973. As medical students, they witnessed women dying from illegal, often self-induced abortions; as underground practitioners, they risked their livelihoods. Since legalization, they’ve watched the rise of anti-abortion extremism, with bombings, assassinations, and attacks occurring in clinics around the country. Many are still practicing.

After reading this introduction, one might get the idea that the abortionists were freedom fighters who were trying to save vulnerable women from crazy pro-life terrorists. In fact, many of the doctors interviewed in the article repeated this and other tired pro-abortion memes.

For example, Dr. Curtis Boyd, who committed his first abortion in 1966, and described his illegal abortion network as "an underground railroad," claimed he was moved to perform abortions by the cries for equality.

Ronan apparently never asked these doctors why they immediately sought to provide this reproductive equality through abortion, rather than through abstinence or birth control methods.There was only “the whim of the pregnancies.”  This would have been a prime opportunity for a journalist to get inside the minds of abortionists, discern their values, and their grasps of basic medical science.  Better yet, Ronan could have asked why women “couldn’t proceed with much else” unless they could get legal abortions.

Like abortion mills today, Dr. Boyd insisted that he did it all for the women. “Honestly, the hardest thing about it was that the women were so desperate. I couldn’t say no. It became my life, it was day and night.”

My first delivery was previously undiagnosed twins for an 11-year-old. It became obvious my job was going to be to help women who wanted to have babies have them and help others not have them….I find that women tend to apologize if they come back for a second abortion. I always say, ‘I’m sure getting an abortion wasn’t on your bucket list. I’m flattered you came back.” [Laughs.] It is a failure of control over your life. I tell them, ‘You can feel as ashamed about this as you need to, but also know that I know you’re not here on purpose. Nobody gets pregnant on purpose to get an abortion. I mean, I had an abortion and I wasn’t happy about having one….No matter how much you shame and scare them, women will still come for abortions.

Unsurprisingly, Ronan never asked why abortion is the healthiest option for someone who is experiencing a “failure of control over [their] life.” 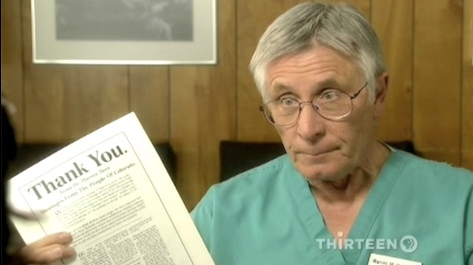 Some of the doctors used their interviews to disparage the pro-life movement. Dr. Warren Hern, a longtime favorite when the TV networks go looking for a late-term abortionist to promote,  painted himself as a determined warrior for choice in the face of evil pro-lifers.

From the beginning, I got death threats. I was living in my house up in the mountains and I started sleeping with a rifle by my bed. I was amazed. How could this be controversial? It was the first time in human history women were able to end pregnancy safely. The death threats were very clear, but I don’t let the anti-choice movement intimidate me into stopping.

Of course, no smearing of the pro-life movement would be complete without blaming them for the murder of Dr. George Tiller.

The anti-abortion fanatics have shown they’ll stop at nothing, including the assassination of a doctor in his church. Dr. [George] Tiller was a really good friend. I miss him. We talked on the phone two or three times a week.

Not surprisingly, both Ronan and Hern neglect to mention that the pro-life movement overwhelmingly condemned the murder of Dr. George Tiller.

Hern played up the safety of abortions....for women. “I was amazed. How could this be controversial? It was the first time in human history women were able to end pregnancy safely.”

Perhaps the most over the top emphasis on the supposed safety of abortion came from Dr. David Grimes, who joined the ranks of abortion doctors in 1972.

Abortion in the U.S. has become a victim of its own success; an entire generation of Americans have grown up without seeing or understanding what the dark days of before Roe were like. Without understanding that history, you can’t fully appreciate what the right to choice means…The evidence is clear and incontrovertible that abortion is a safe and an important part of women’s health and yet we still see this broad campaign of deception. You’re actually twice as likely to die from an injection of penicillin than an abortion, but no one is suggesting penicillin injections happen in a surgical ward.”

Dr. Grimes did his best to protect his trade at the expense of women and the unborn.

The North Carolina General Assembly has been voting in further restrictions to abortion practice. There’s no need for that. There hasn’t been a death from abortion in this state in decades….Last year, 23 people died in boating accidents in North Carolina. If the General Assembly truly cared about safety, they could make wearing life jackets mandatory. Boating is much more dangerous than having an abortion.”

Naturally, Ronan didn’t bother to point out that the doctor's assertion that North Carolina has been free from abortion-related deaths can only be true if he ignores the infant “death[s] from abortion,” which numbered 22,820 in 2013 alone.