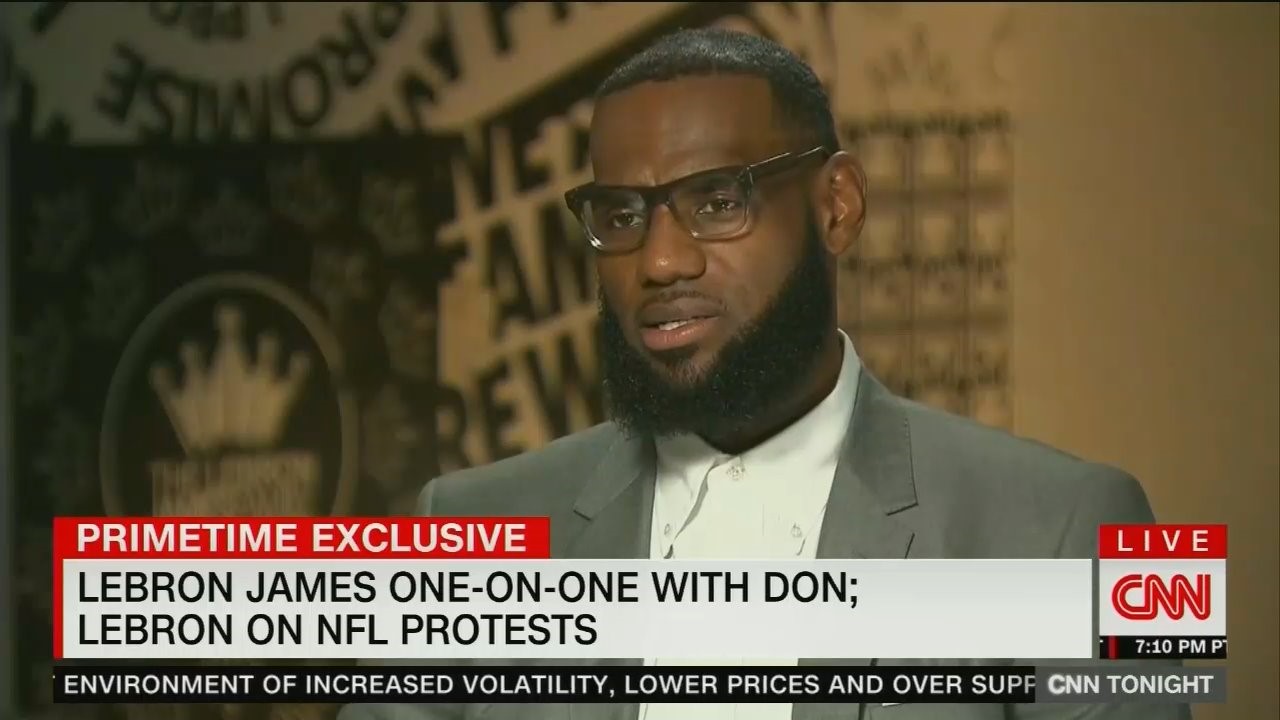 Pro basketball legend LeBron James was interviewed on CNN Tonight on July 30. Host Don Lemon warmly congratulated him for opening a school for 240 at-risk children in his hometown of Akron, Ohio. If only it could end there, focused just on that. But you knew it wouldn’t.

Because as they say, “this.... is CNN." So it was expected that Lemon would encourage James to trash President Trump, because that’s what CNN does, hour by hour, minute by minute. James said that in his childhood, sports is where he came to a better understanding of white people. He said sports “brings so much camaraderie and so much fun. You know, we are in a position right now in America more importantly where this whole -- this race thing is taking over, you know. And because I believe our president is kind of trying to divide us.”

That might sound a little funny, since sports necessarily divides based on team loyalties, even if the whole is united in its affection for the sport. But it’s also strange because athletes can often be divisive – and have recently relished that role – whether they demonstrate a lack of sportsmanship, or get on the wrong side of the law, or they feel they need to use their fame to score political points that offend so many.

Why must the Left always try to create the often false impression that conservatives divide, and they unite? The national anthem, for example, is a time when conservatives call for unity. The kneelers are the original dividers.

Lemon goaded James some more about Trump: “You’ve heard what the man in charge -- you’ve heard what the president said about Marshawn [Lynch], about Steph [Curry].” James added Colin Kaepernick. Lemon asked: “Men of color who have means and a platform. What’s up with that?”

Curry publicly refused to meet with Trump at the White House, but James weirdly said of Curry “there’s no reason for anyone to ever attack him.”  James also told Lemon he would refuse to sit across from Trump, but “I’d sit across from Barack, though.” Pro athletes are free to make that choice, and they feel they should be immune from criticism for making it. Oh, to be coddled like that.

On Kaepernick, Lemon claimed Trump perpetually exploits him: “Whenever there's something like he's in trouble, he can't wiggle his way out of something, he'll bring up the national anthem thing and kneeling or standing. Do you think he uses black athletes as a scapegoat?”

Do you think Lemon used Trump the exact same way?

James agreed: “At times....Look at Kaepernick, who was protesting something he believed in and he did in the most calm, fashioned [sic] way possible.” Lemon said “Respectful.” James replied: “Very respectful....He did all his due diligence.”

Here comes the Fake News on CNN. Kaepernick wore socks in training camp of pigs with police hats on them. How is that “very respectful”? He also said America was founded on slavery and genocide. That’s the CNN interpretation of  “due diligence.”

Lemon then editorialized: “I loved sitting down with LeBron today.” He loved “his authenticity.  I was sitting down with a celebrity who didn't care ....[he was] going to offend this demographic....or may not come to a game because of that.”

This...is CNN . They trash conservatives and don’t care if they offend viewers. Maybe that’s not a contradiction if you presume they have no conservative viewers.