CBS’s pay-cable Showtime channel is the latest backer of con artist/”comedian” Sacha Baron Cohen’s performance art, as in the movies Borat and Bruno. It’s a new TV show called Who Is America? and is designed, as usual, to mock Americans – mostly conservatives -- as gullible and stupid.

The most prominent victim this time around was Sarah Palin, who said she was asked to appear in a “legit Showtime historical documentary,” but instead was pranked by Cohen asking questions she said were “full of Hollywoodism’s disrespect and sarcasm.” Cohen also apparently asked former vice president Dick Cheney to autograph a “waterboarding kit.” The promise of these embarrassments thrills the Left. It was not an auspicious debut: Showtime drew just 327,000 viewers on July 15. Among the key 18-49 demographic, it pulled a low 0.1 rating. 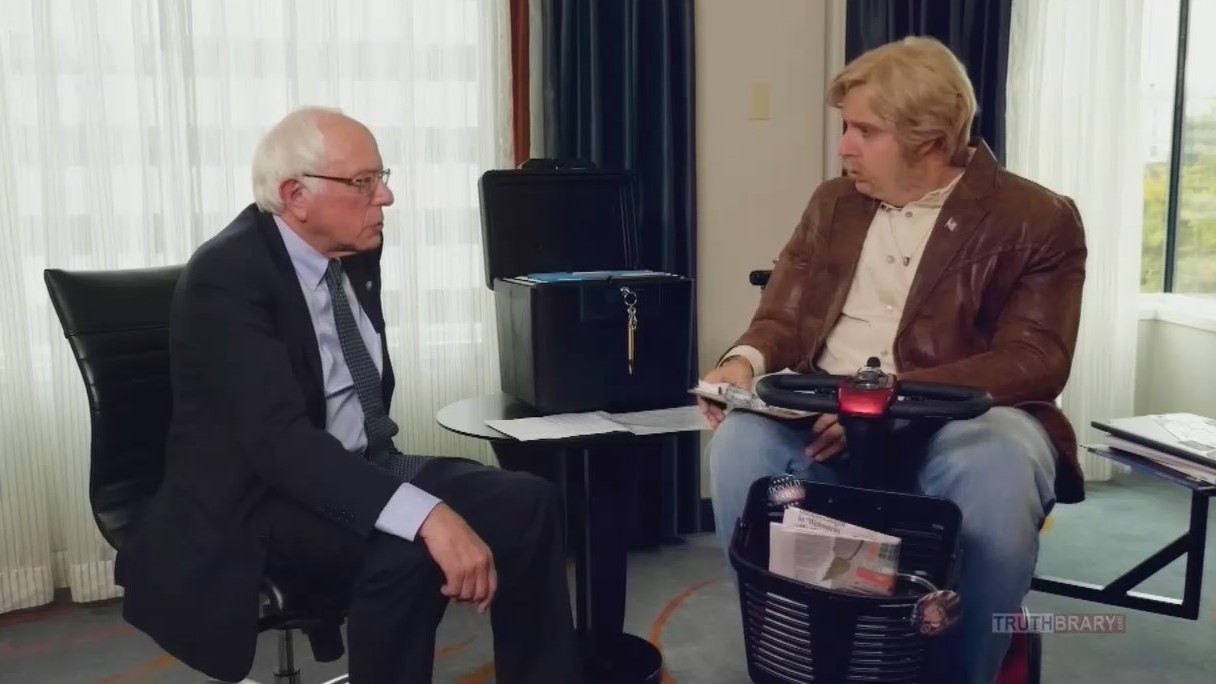 Even as the first show began with Cohen pulling a prank on Sen. Bernie Sanders, it’s Cohen’s fraudulent Tea Party patriot who’s the joke. When Sanders does his usual socialist schtick about redistributing the wealth, Cohen’s character says “I’d rather be anally raped than give one more dollar to the Treasury.” Sanders just calmly watches this….which might make most viewers suspect Sanders knows what’s being filmed.

One Cohen character is supposed to mock the Left, but he ends up making two Trump supporters look like they’re trying way too hard not to overreact to his idiocy. His bald but ponytailed, NPR T-shirt wearing lefty character claims he makes his daughter “free bleed” during her period on the American flag, waiting for the Trump fans to freak out, or more likely, be grossed out. Cohen’s humor has all the maturity and sophistication of a 13-year-old boy.

Several people dismissed Cohen’s fraudulent act within minutes. One was former ABC News star Ted Koppel. Cohen’s crew lied shamelessly to him that they were filming for a Showtime program called Age of Reason, and Cohen quickly showed he wasn’t the slightest bit reasonable. They attracted Koppel with a request full of flattery:  ”Our project's goal is to cut through the noise and disinformation surrounding today's most important issues in a way that's clear and accessible to everyday Americans. As one of the world's most well-respected media figures who has really seen it all throughout his career, we'd be thrilled to have Mr. Ted Koppel on our program.”

Another tough customer was a gun-shop owner in Riverside, California, named Norris Sweidan. “I’m looking at the producer and I’m just like am I being fooled right here?” Sweidan said. “And I just kept looking at the guy and I was like, ‘you’re Borat.’ As soon as I said that, his eyes just looked at me like, and he did a turn right out the door.”

Sweidan said he knew “Borat” came there to mock gun owners and gun shops.  “He was fake, the producers were fake, the show was fake, and Showtime is fake to be honest with you,” he said. “They want a real story, come talk to us. We’ll give you a real story.”

Showtime Networks CEO David Nevins shares Cohen’s lack of shame. In a statement announcing this shady series, he claimed. Cohen "is the premier provocateur of our time but not for the sake of ‘gotcha’ moments. Behind the elaborate setup is a genuine quest for the truth about people, places and politics."

It’s more like “behind the elaborate lying is a genuine quest to show the ‘truth’ that conservatives are morons.” The Hollywood Left cannot keep green-lighting nasty shows like this and then claim they’re merely trying to explore America, not expose their contempt for the flyover states.