Supreme Court retirements under Donald Trump cause an extra measure of heartburn to Democrats. They nominated Hillary Clinton and her seven-mile train of scandalous baggage for president, and that’s jake. They elected Bill Clinton who perjured himself and sullied his office – not a problem.

The one guarantee about Trump appointing Judge Brett Kavanaugh is that the Democrats, fueled by their mindless street mobs, will try to destroy him. It’s how Democrats behave. It is not how the “news” media should behave. Is there anyone who disputes that? But it is how they will comport themselves, because they are one with their Democrat brothers and sisters.

One by one, leftist Democrats have been making preposterous comments since the moment Trump made his announcement. Sen. Kamala Harris, for instance, immediately described Kavanaugh as a deadly threat: "His nomination presents an existential threat to the health care of hundreds of millions of Americans."

The “news” media reaction to Democrat rants? Nothing but air time.

Leftist websites like the Daily Beast presented Trump’s short list of candidates as a plot by “fundamentalist Catholic” puppet masters. Where are the news reports about Kavanaugh being slandered for his Catholic faith? To beat this old saw, what if National Review had attacked Ruth Bader Ginsburg’s nomination as a plot led by Zionist puppet masters? You could hear journalist heads explode. 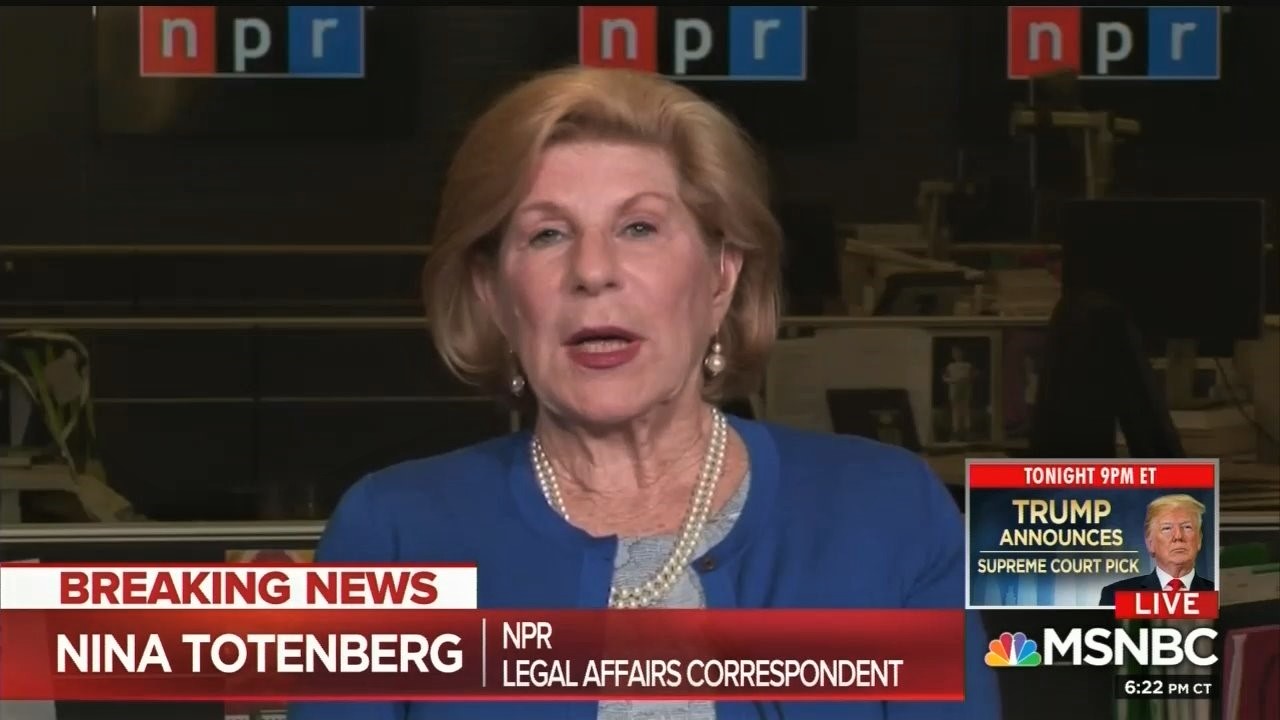 Instead, reporters like NPR’s Nina Totenberg – who not only smeared Clarence Thomas with unsubstantiated sex-harassment bilge, but these days openly allies herself in public appearances with Justice Ginsburg – are warning about Anthony Kennedy’s retirement being the “end of the world as we know it,” leading to “a hardcore conservative majority of a kind not seen probably in three-quarters of a century.”

To conservatives, that sounds great. But this reaction underlinets why people don’t trust the liberal media funhouse any more. Under Barack Obama, the Democrats tried to socialize health care with Obamacare. They pushed gay marriage and the Supreme Court imposed it on fifty states. Obama also imposed radical federal “guidance” on public schools toward “inclusive” policies on transgender students.

Our liberal TV anchors and taxpayer-funded Totenbergs never described all this as the “end of the world as we know it.” It wasn’t the work of a “hardcore leftist” administration. But now the idea of reversing any of this is called a shift “sharply to the right.”

When Obama was nominating Sonia Sotomayor and Elena Kagan to the court, no journalist talked about extremes. They gushed like school girls. Try ABC’s Claire Shipman (Mrs. Jay Carney) on Sotomayor nine years ago. This sounds like an Obama campaign advertisement:

“Even as a little girl, growing up in a drug-ridden South Bronx housing project, stricken with juvenile diabetes, she had that trademark knack: instead of seeing dead ends, young Sonia saw possibilities....She’s also an avid Yankees fan, a mean guacamole maker, and a fierce biker.”

Sotomayor sits at the left-wing extreme of the Supreme Court, but at her confirmation hearings, the networks were in denial. Jan Crawford at ABC said “Sotomayor — calmly, persistently, repeatedly — described herself differently, sounding almost conservative.”

But any research seems to bring us back to the eternally shameless Totenberg. “In fact, on a lot of criminal law issues, you could say that [Sotomayor's] more conservative than some members of the Supreme Court, including Justice Scalia.”

When Kagan was nominated in 2010, Totenberg took to NPR and – we’re not making this up – put on the theme song to the Superman TV show from the Fifties to compare Kagan, the Harvard Law School dean, to Superman: “Kagan, who can raise money by the millions! Kagan, who can end the faculty wars over hiring! Kagan, who won the hearts of students!”

They are about to show the world what first-class hypocrites they really are.