NBC News star Chuck Todd recently made a podium-pounding speech to a journalism awards dinner. He proclaimed “One thing we’re not is the opposition. We’ve never tried to be part of the political debate, but people want to drag us into it. We shouldn’t take the bait. We’re simply a voice of truth!” 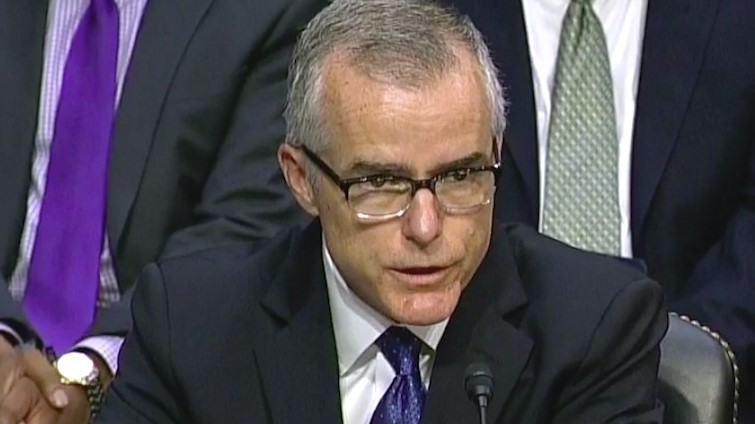 So let’s consider the case of Andrew McCabe, former deputy director of the FBI.

The FBI’s Office of Professional Responsibility (OPR) recommended that McCabe should be fired for lying, or to be gentle, a “lack of candor” – even under oath – in an investigation by the Justice Department’s Inspector General into the Hillary Clinton email probe. The Inspector General is a career department official. The head of the OPR was appointed in 2004 by....then-FBI director Robert Mueller.

So when Attorney General Jeff Sessions sacked McCabe, the “voice of truth” media were pleased, right? Well, actually, no. They were so upset by the president's victory-lap tweets that they fast-forwarded past the facts about McCabe’s lying.

ABC’s and NBC’s morning shows skipped the part about McCabe’s “lack of candor.” They went straight to McCabe’s self-defense that he was a target of partisans (despite his wife running for office as a Democrat), and not an honesty problem for career government officials. ABC’s Cecilia Vega reported  “McCabe says he was targeted because of what he called the administration’s war on the FBI and the Mueller probe.”

Chuck Todd, who claimed he didn’t want to be dragged into the political debate, enthusiastically guessed “I think it signals this president is no longer cooperating with Mueller. It's time for war.”

The timing of McCabe’s sacking looked harsh, since we were routinely told he had just a few days left to qualify for his FBI pension. So Todd’s NBC colleague Andrea Mitchell even went to Twitter to beg for McCabe to get a job with a Democrat on Capitol Hill, which is what nonpartisan reporters at NBC are supposed to do. “One suggestion from a McCabe supporter: if a friendly member of Congress hired him for a week he could possibly qualify for pension benefits by extending his service the extra days.”

But it turns out the “pro-truth” media missed the boat on that claim. McCabe was nearly eligible for pension benefits after 20 years of service at the age of 50. Now he can’t claim it until age 57. Good luck selling that as a terrible scenario to people who retire at the private sector-accepted age 65. Or whose meager pensions don’t allow them to retire -- ever.

None of these not-the-opposition networks noted that McCabe was getting a sweeter treatment by the legal process than Gen. Mike Flynn, who was forced to plead guilty to lying to the FBI, instead of lying within the FBI. Nobody at the networks protested about a “war” on government officials or tweeted out help-the-poor-public-servant messages for Flynn. He deserved every criticism liberals threw his way. CNN mocked Flynn by quoting a tweet about his 24 days as National Security Adviser: “I once had a fungal infection that lasted longer than Flynn."

The network coverage of Andrew McCabe matches their coverage of everything else in the Trump era. It’s not that they look like the Opposition Party. They are the opposition party. Who’s telling the truth doesn’t matter. Resisting and ruining Trump is what matters.