President Trump upset the media greatly at a rally in Pennsylvania where he enthusiastically mocked NBC’s Chuck Todd as a “sleeping son of a b---h.” Retired NBC anchor Tom Brokaw tweeted “Really classy. Explain that to your children.”

On Meet the Press the next day, Todd tried to shame Treasury Secretary Mnuchin about Trump’s contempt for a free press. "When [President Trump] uses vulgarity to talk about individuals, what are they supposed to tell their kids?" 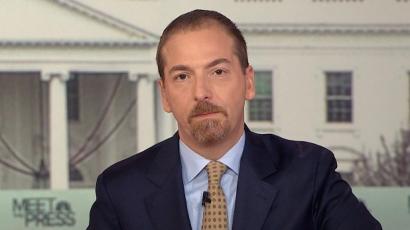 Todd told the local NBC station, WRC, that "I bring my kids up to respect the office of the presidency and the president. I don’t allow them to say anything negative, ever, about the president.” He added, “It creates a challenge to all parents when he uses vulgarities like that."

That would make Chuck Todd the most hypocritical father in Washington. He says everything negative about the president. He warned Trump had a “lame duck presidency” on the “brink of collapse” ….two months in. He called Trump’s attacks on the press “un-American” and asked “could Putin have asked for anything more?” Then “Free Press Chuck” denounced the conservative media as Trump’s “Kool-Aid orbit.” He even compared Trump’s election to the 9/11 terrorist attacks.

President Trump should not have used that language. No president should. But save us the lectures, please. Anyone watching  television knows that curse words - like “SOB” - are commonplace, whether it’s broadcast, cable, or streaming, late night or early evening, in front of children. Today’s Son of a bitch! is yesterday’s Damn! and last week’s Darn!

Liberal media elites feigning shock at the utterance of curse words in front of The Children is ridiculous. The hypocrisy here is immense, and shameless.

It would be nice if NBC and all the other TV networks aired less vulgarity. Then it would be reasonable to grab the smelling salts and call out Trump for his inappropriate language.

Oh, and speaking of hypocrisy, where are the Tom Brokaws and Chuck Todds of the world when Democrats curse? Take Hillary Clinton, who appeared on BBC’s Graham Norton Show to plug her why-I-lost book last year. Talking about Trump’s inaugural speech, she said “And it was reported that George W. Bush, as it ends, says, ‘That was some weird s—.’” Laughter and applause erupted, and host Graham Norton replied, “And it was.” No one fell on a fainting couch.

The Chuck Todds don’t even blink when Democrats curse at ... Chuck Todd! They all laughed when President Obama made a video for the 2016 White House Correspondents Dinner where Todd fake-reported that Obama would become “couch commander” after leaving office. “F--- you, Chuck Todd,” Obama said to the TV.

Did Todd explain that skit to his kids? You think he doesn’t keep a copy of that video for future generations of the family Todd? Vulgarities don’t matter when the press is laughing alongside their heroes. It’s not the words that matter. It’s the contempt.

One reason Trump’s ridicule resonates with voters is the media’s arrogant lie that they are nonpartisan voices of Truth. Two days before Trump cursed about Todd, Todd gave a speech at a media awards dinner and unloaded a whopper.

“One thing we’re not is the opposition. We’ve never tried to be part of the political debate, but people want to drag us into it. We shouldn’t take the bait. We’re simply a voice of truth,” he said.

The media have “never tried to be part of the political debate”? A “voice of truth”? That’s a Levi’s factory of “pants on fire.” Explain that to Todd’s kids, since their mother operates a direct-mail firm for Democrats, like Bernie Sanders -- who paid her firm almost $2 million in the 2016 race.

In his speech, Todd even proclaimed “Transparency is the new objectivity.” But he never tells viewers about his wife’s business when he interviews Bernie on Meet the Press (17 times since the start of 2016). Chuck apparently thinks the rest of us are sleeping SOBs.