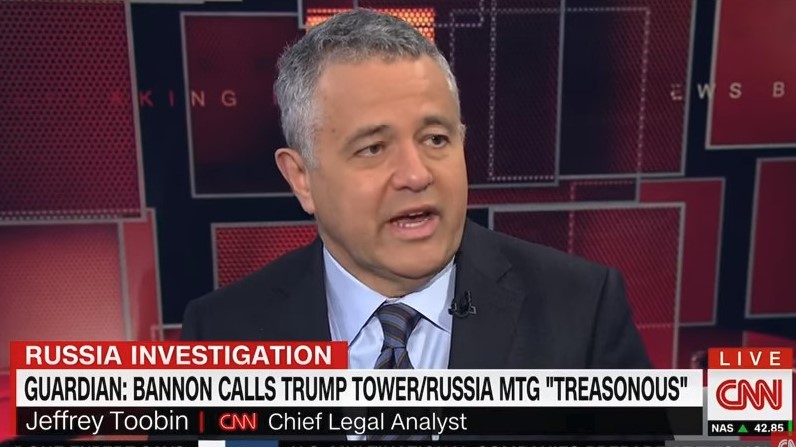 President Trump heard someone yell “treason” in the audience at a speech in Cinncinati as he mentioned the Democratic pouting at the State of the Union address. “Somebody said, treasonous,” he mused. “I mean, yeah, I guess, why not?”

The media outrage was summarized by CNN analyst Jeffrey Toobin: “It is so grotesque! It is so appalling...I just wonder what the cost is, in terms of the future of our civic discourse!”

At this point we should just start laughing at the press. These self-appointed watchdogs of the “civic discourse” weren’t a bit outraged when liberals tossed that T-word like a Frisbee at anyone criticizing President Obama. Here are just a few examples.

– October 1, 2015: Leftist radio talker Thom Hartmann was incensed that anyone could consider Kevin McCarthy for House speaker, citing some Republican inauguration-night conspiracy to deny Obama any success. “They have committed treason. Maybe not the kind of treason that is elevated to the level of a prosecution or firing squad....a moral treason.”

In fact, this liberal treason talk just kept going under Trump, but he became the perpetrator.

– March 2, 2017: CNN contributor Maria Cardona, on Attorney General Jeff Sessions: “He knows he is smack in the middle of this investigation having to do with perhaps treasonous activities by the Trump campaign.”

– March 28, 2017: MSNBC anchor Kate Snow brought on liberal historian Douglas Brinkley, promoting his quote: “You told the Washington Post last week that, quote, ‘There’s a smell of treason in the air,’ when it comes to this [Russia] investigation.”

– May 11, 2017, On ABC’s “The View,” co-host Joy Behar screeched about the press being barred from a Trump meeting with Russian foreign minister Sergei Lavrov: “This is treason to me! This is un-American!”

– June 25, 2017: Hollywood director Rob Reiner uncorked treason as a Twitter hashtag. “When Fox says that DT colluding with the enemy is not a crime, the fight to save Democracy is now an all out war. US-Stay strong. #Treason”

– July 18, 2017: Former MSNBC star Keith Olbermann tweeted in reply to the president asserting most people in politics would have met a foreign official to get negative information on their opponent: “Sure! Benedict Arnold would have. And Aaron Burr. And Charles Lindbergh. And Quisling. And Marshal Petain. That's politics! Annnnnd treason!”

Speaking of “grotesque” and “appalling” overstatements, let’s consult the accuser himself, Jeffrey Toobin, responding on CNN on January 3, 2018 to Steve Bannon suggesting Donald Trump Jr was treasonous: “The idea that people involved in an American presidential campaign would greedily reach out to the Russian government for dirt on their opponent, as Donald Trump Jr. and company did, does feel treasonous in a sort of colloquial sense.”

Liberals are the worst hypocrites on “civic discourse.”