Bozell & Graham Column: The Fake News of 'The Handmaid's Tale'

Dystopian entertainment is all the rage now that Donald Trump is president, and the more unglued it sounds about an approaching American totalitarian state, the better. Hence the liberal cheerleading for The Handmaid’s Tale, a TV series made for the streaming service Hulu.

It’s based on a loopy 1985 novel by the radical feminist Canadian author Margaret Atwood, which imagines the United States quickly falling under a theocratic dictatorship based on its Puritan roots. America becomes a patriarchy called the “Republic of Gilead.” All women are deprived of their rights and are forbidden to read. Due to environmental degradation, very few women can conceive a child, and so a slave class of “handmaids” are created, whose entire purpose is giving birth. The handmaids wear dowdy red gowns (to represent menstrual blood) with large white bonnets that obscure their faces. 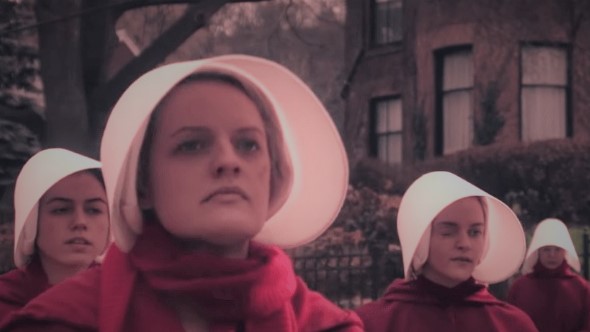 Liberals called this story “very timely” in 1985, and never stopped declaring it timely. On CBS, series star Elisabeth Moss proclaimed: “When everyone signed on, it felt incredibly relevant. It was written in 1985 and its been relevant every decade since. I think it's just in this country, there's a relevance now that is striking everybody.”

As she accepted a “Champion of the Century” award from Planned Parenthood, Hillary Clinton referred to the book and show as a warning for feminist vigilance. Moss gushed on CBS this was a “huge honor” and “we all respect her so much.” For her part, Atwood said that after the 2016 election, “the cast woke up in the morning and thought, we're no longer making fiction — we're making a documentary.”

This is why conservatives tend to laugh when liberals rail against the scourge of “fake news.” There is no faker news than the notion that America is on the precipice of a Puritan patriarchy under Donald Trump.

But the Left pretends it’s real. In an adoring National Public Radio interview on April 26, anchor Audie Cornish pointed out “The Handmaid's costume has appeared in real life in recent times. Silent protesters wore similar costumes in a demonstration against the passage of abortion restrictions in Texas.” She asked Elisabeth Moss, “How weird was that?” Moss replied: “Oh, not weird, awesome. I mean, so, so cool. This costume, this color, the bonnets, they're so iconic. And they stand immediately for feminism and women's rights....It’s a very moving thing.”

In the real world, it’s the “theocrats” like the Little Sisters of the Poor that are being forced to bow to the Libertine Left’s demands they fund contraceptives for employees. The Democratic platform endorsed forcing taxpayers to pay for abortions.

Now imagine someone in 1985 had written a dystopian novel about how there was this large abortion conglomerate, a business so inhumane that it would rip unborn babies limb from limb and then sell the body parts to research laboratories. A female doctor babbles over a salad that “We’ve been very good at getting heart, lung, liver, because we know that, so I’m not gonna crush that part, I’m gonna basically crush below, I’m gonna crush above, and I’m gonna see if I can get it all intact.”

But to the Left, the Republic of Gilead is “incredibly relevant,” while actual videotapes of Planned Parenthood doctors are denounced as irrelevant fiction.