Just as the liberal “news” media have doubled down on fierce liberal activism since the Trump inauguration,  so too is Hollywood pushing that leftist agenda. Variety celebrates the crusade -- that is what this is -- in an article headlined “TV Gets Woke: How Scripted Series Are Confronting Social Issues Like Never Before.”

It is not that Hollywood should be political, it is that the industry must be political. Even the sitcoms need to be political. “Social media is in a constant conversation about things,” proclaimed NBC Entertainment president Jennifer Salke. “It doesn’t feel authentic to not address what’s going on in the world and what people are really talking about. I think that’s a sweet spot for comedy in general.”

They point to The Carmichael Show on NBC, which, like so many series advancing left-wing causes is not a hit, but features plots about hot topics like gentrification, defined like this:  “Gentrification is essentially when developers look at a neighborhood the way Richard Gere looked at Julia Roberts in Pretty Woman. You know, you see past all the flaws of the past. You see a perfect spot for a Starbucks or an Ethiopian restaurant run by non-Ethiopians.”

This is what John Q. Public wants when he wants to watch TV? (Did we just say "he"??) 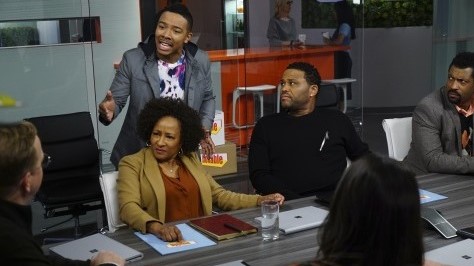 ABC’s Black-ish drew liberal praise for a January episode where the black characters confronted the Trump victory.  “We didn’t just want to be a family comedy show,” actor Anthony Anderson explained. “We wanted to be substantive and have a conscience and have something to say without beating you over the head with that message.”

That depends on how you define “beating you over the head.” Decide for yourself. When a white woman says she voted for Trump, she is shamed for hating women. She fights back by suggesting that since blacks wouldn’t vote for Ben Carson just based on race, she wouldn’t vote for Hillary. The black characters slam Carson: “Dude is a weirdo” and “Is he even black?”  A character played by Wanda Sykes adds this dollop: “As long as she knows that a vote for Trump is a vote for racism!” When the Trump voter protests, “I have black friends!”  the blacks collectively howl. One hectors, “It’s racist to say that!”

The lectures come in the dramas, too. Fox has a new drama coming soon called Shots Fired, inspired by the Trayvon Martin shooting and the “Black Lives Matter” movement. Creator Gina Prince-Bythewood was recruited by Fox after the Ferguson riots. “It’s not enough to preach to the choir,” she told Time magazine. “You have to speak to everybody.”

She told Variety “these things were fueling us in wanting to say something to the world, and how we could use our art as a weapon to speak on this…One of the mantras we have is that anyone can portray reality, but an artist portrays what reality should be.”

Their show was filmed before the election, and now “there’s been a 180-degree change,” says Prince-Bythewood.  “Now the Department of Justice is absolutely under siege under this new administration. Will it even have the ability or the desire to look into cases of injustice?”

They have consulted with experts like Obama’s attorney general Eric Holder, and for supposed balance, former New York police commissioner Ray Kelly. But there will be no balance.  As on Black-ish, they may have a marginally sympathetic white character to offer some sign they’ve listened before filming. But that nagging ideological temptation to use your “art as a weapon” is sure to come barging through the TV, again and again. And again.