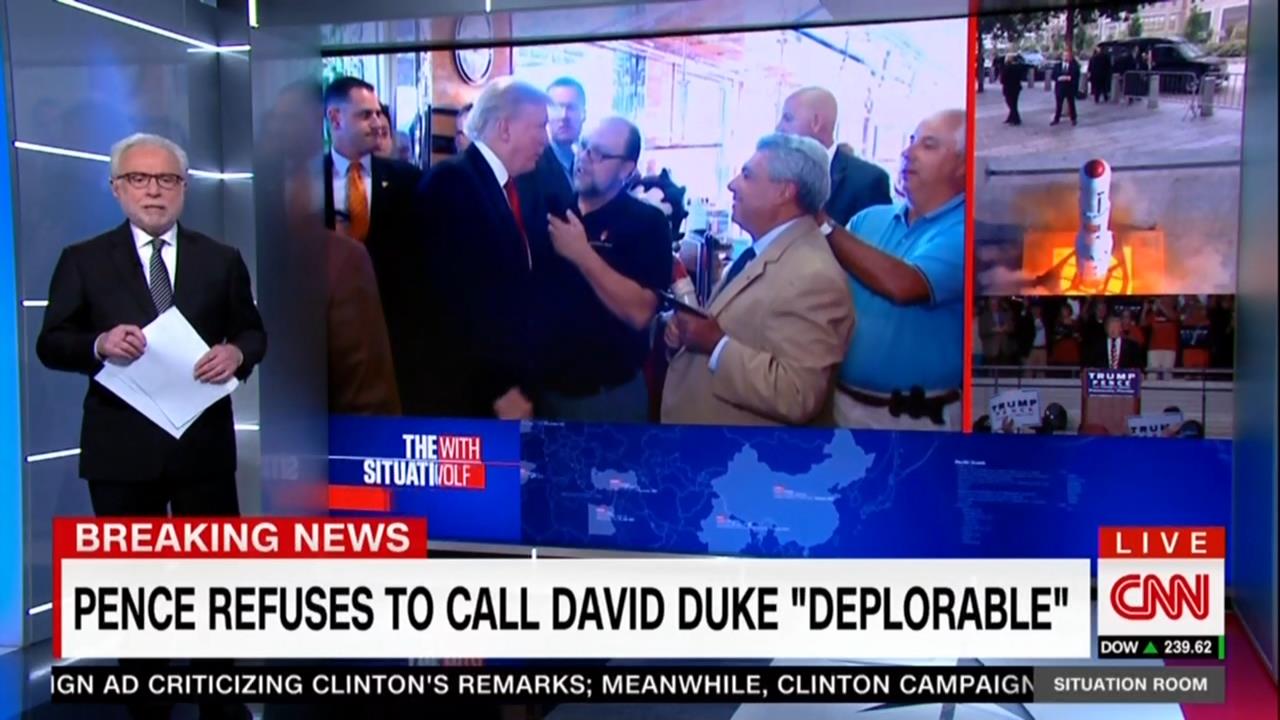 The CNN screen graphic at 6 pm on September 12 was blunt: “PENCE REFUSES TO CALL DAVID DUKE ‘DEPLORABLE.’” Mike Pence had granted Wolf Blitzer a 30-minute interview, and what he received in return was a reckless leftist smear.

Let's be clear about this interview. Blitzer offered 39 hostile questions or interjections about Trump’s tax returns, medical records, charities, and offensive remarks before asking a single question about policy. In the middle of this contentious exchange, Blitzer arrived at Hillary Clinton’s gaffe calling Trump backers a “basket of deplorables.” Blitzer obnoxiously underlined that some Trump backers were truly deplorable: “David Duke, for example, some other white nationalists, who would fit into that category of deplorables. Right?”

Pence protested, “I'm not really sure why the media keeps dropping David Duke's name. Donald Trump has denounced David Duke repeatedly. We don't want his support, and we don't want the support of people who think like him.” Blitzer pushed back: “Would you call him a deplorable? You would call him that?” Pence replied: “I'm not in the name-calling business, Wolf.”

CNN ignored that denouncement of Duke and his backers. It was spiked in favor of a cheap National Enquirer-style “Pence Won’t Deplore Duke” headline.

It's the kind of gotcha journalism that has the public disgusted with the press. However Pence answered this would have been been wrong and exploited by the media. Had he uncorked the easy answer and called Duke deplorable, Blitzer and everyone else would have their headline: “Pence Admits Hillary Was Right.” Pence chose not to give them that luxury, so he gets "Pence Won't Deplore Duke."

Do you imagine -- in your wildest imagination -- Blitzer posing any of these questions to Tim Kaine?

– “The Communist Party USA endorsed you. Are they deplorable?”

– “You've been endorsed by Planned Parenthood,  an organization that harvests baby parts for sale. Are they deplorable?”

– “You were supported by the anti-American father of Omar Mateen, who murdered 49 gay people in an Orlando nightclub. Isn’t he deplorable?”

In an interview on August 28, Blitzer's colleague Jake Tapper asked Pence about Duke’s support, the umpteenth time it's been asked.  Tapper at least offered a “that must really bother you” expression. For his part, Pence blasted it over the fence, explicitly making a comparison between Duke and Seddique Mateen: “The fact that...a contemptible individual like that supports my running mate is no more relevant than the fact that the father of a man who killed 49 people in Orlando, Florida, was cheering Hillary Clinton at one of her rallies.”

CNN could grill Kaine about a sympathetic September 2 story in The New York Times about the Democratic vice presidential nominee seeking out communist priests as his mentors in El Salvador. He “walked miles” to meet Father James Carney, who even the Times reported took “an extreme view of liberation theology that supported the taking up of arms against military oppressors.” His mentor Father Jack Warner believed “the gospel is an extremely communist document.” Were these priests “deplorables”? Did Kaine’s distance-hiking hunger for their Marxist mumbo-jumbo make him deplorable?

"Hillary Clinton's husband has been exposed as a serial philanderer. He was impeached. He committed perjury and was disbarred. There is also the accusation by Juanita Broaddrick that he raped her. Is Bill Clinton deplorable?"

Instead, Blitzer & Co. unload smears designed to help Hillary because they know she is in trouble and CNN is all too willing to do Clinton’s dirty work. Media credibility continues to erode in the polls because there is nothing the press won’t undertake to slander conservatives.