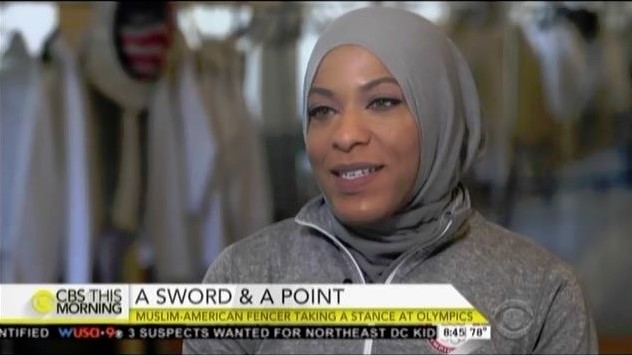 The Olympics are only the latest event where our elites mistake diversity for “history.” One breakout star across the TV networks was Ibtihaj Muhammad, a 30-year-old fencer from New Jersey. A traditionalist Catholic woman from Maryland would register a collective yawn. A black Muslim woman in a hijab gets a perfect 10 from the diversity judges.

ABC reporter Matt Gutman gushed she was “set to become the first US woman ever to compete at the Olympics wearing a hijab. And she wasn't at all en garde, sorry for the pun, for breaking barriers and slashing her way into history.”

NBC found her mentor Peter Westbrook to praise her: “She is an absolute role model for the children, for our organization, for Islamic people, for all Americans all over the world.” On CBS, Charlie Rose said “Sounds like she’s a superachiever.”

Well, no.  Actually, Muhammad lost in her second-round sabre match and didn’t move beyond the round of 16.

If the mission is to find an American who does not support American greatness, Muhammad's an excellent choice.To say she's not a fan of the United States is to put it mildly. Part of her “role model” behavior is to denounce this country. The Daily Beast headlined her claim: “I’m Not Safe In The U.S.” She denounced a “climate of anti-Islamic sentiment in the United States” and said she “had someone follow me home from practice and try to report me to police....right on 28th and 7th in New York City.”

That kind of Blame America thinking registers with the elites.

Like other journalists, NBC’s Morgan Radford played up the Islamophobia angle: “But while she suits up for the red, white, and blue, she`s faced with the painful reminder that some don`t think those stars and stripes belong to her.”

On CBS, reporter Elaine Quijano explained “Muhammad says she owes it to her community to use her platform as an Olympic athlete to speak out against hate.” Muhammad claimed “I had a man encounter me on the street and told me that I looked suspicious, and that I looked like I was going to blow something up.”

Here’s what all these glowing stories omitted. Pamela Geller displayed a 2008 Instagram post where Muhammad posted a picture of another Muslim woman, Leila Khaled, who made history as the first female Muslim hijacker of an airplane, with the terrorist group Popular Front for the Liberation of Palestine. Khaled held a gun and smiled in the old picture, and next to it Muhammad wrote in a caption: “Me with a gun.”

She’s also a big “Black Lives Matter” fan. When a police officer wasn’t indicted for the suffocation death of Eric Garner in 2014, Muhammad tweeted “Don’t forget to set your clocks back 100 years tonight” with the hashtag “New Jim Crow.” In the same time period, she tweeted out a story on “The UN Just Issued a Scathing Critique of America’s Justice System.”

But the Left thinks she is the perfect candidate to proudly bear the American flag at the Olympic parade.