For more than a year, the cable-news networks have feasted on Donald Trump, covering him live, day after day, for hours and hours. Republican contenders couldn’t hope to get a fraction of his TV time. Now that Trump’s secured the nomination, is it possible that the networks will “suddenly” lose interest in every Trump speech? 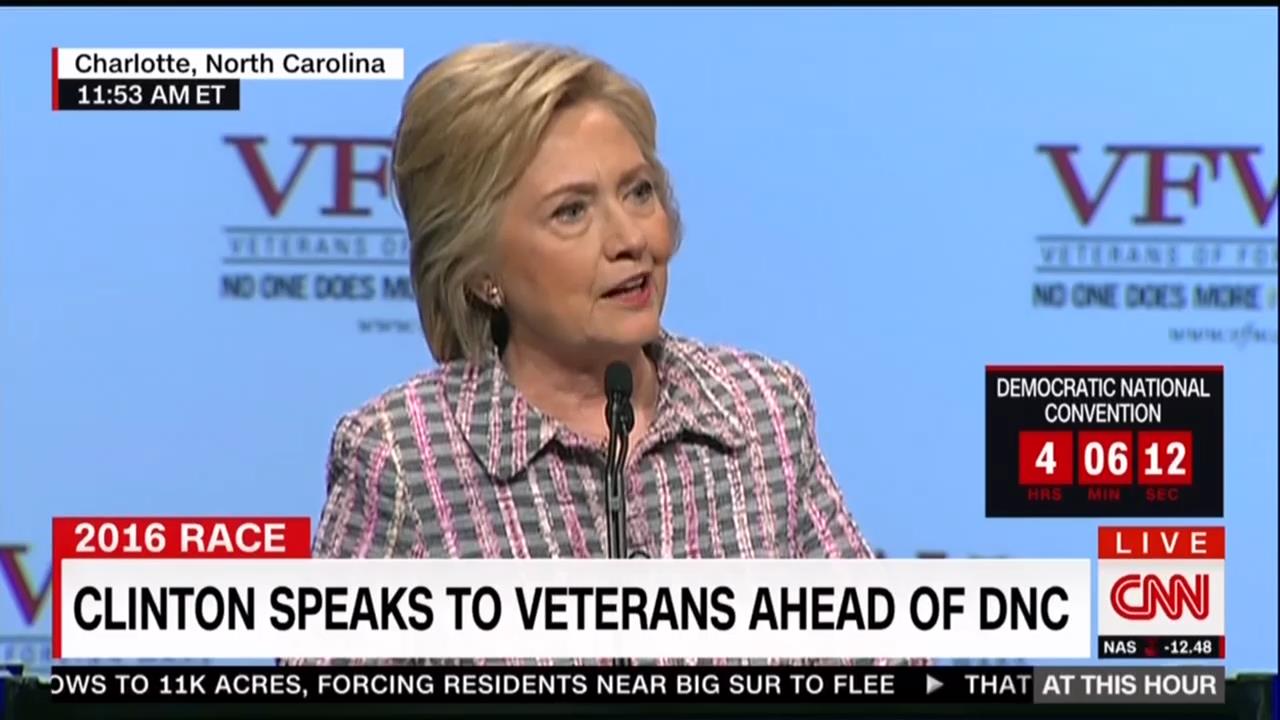 On successive days, Hillary Clinton and Donald Trump gave speeches to the Veterans of Foreign Wars convention. This is usually a greater test for Democratic candidates, since they have a liberal base full of “peacemakers” and Pentagon-haters.

On July 25, Mrs. Clinton spoke, followed by Trump the following day. But no one can figure out how CNN would define one as a big breaking-news event and the other as the news equivalent of a bathroom break. CNN aired the entire Hillary speech – 19 minutes and 20 seconds -- live and uninterrupted in the 11 am hour (Eastern time). The next day, CNN failed to air a single second of Trump’s VFW speech live.

After Hillary spoke, CNN anchor John Berman summarized her theme: “It started out sober and subtle. But by the end, it was flat-out trolling Donald Trump, though not by name, mostly on issues of national security,” with statements like “I don't understand who people who trash-talk America.”

The next day, morning anchor Carol Costello promised Trump was in North Carolina, and “We'll take you there, next.” But all viewers saw was CNN reporter Sara Murray, their reporter on the Trump beat, briefly guessing about what Trump was saying inside.

Tough criticism of Hillary on Benghazi, and the Obama record on veterans health? Not news. What were they doing instead in that hour?

Before Trump spoke, CNN chose to offer two minutes and 23 seconds of live coverage to a Bernie Sanders speech to Democratic delegates from Wisconsin at the DNC. Just over 20 minutes later, CNN also aired another minute and 19 seconds of the socialist's speech to Democratic delegates from California. His campaign was over. He was trying to get his followers into the Hillary tent. That noise was still airing on CNN as Trump’s speech began.

Instead of offering live coverage of Trump’s VFW speech, Costello gave more time to Trump’s opponents while he was talking. She promoted how Democrats are exploiting Trump’s coarse mockery of disabled New York Times reporter Serge Kovalesky to raise money. She brought on former Congressman Tony Coelho and threw a softball. “Tell me about the fundraising off of that Donald Trump moment in the disabled community?”

Coelho gushed: “With this situation, Donald Trump has insulted us. He has given us an opportunity to be aggressively for Hillary...This gives us a moment to go for it in fundraising, Facebook, everything that we’re doing.”

The Republicans who thought Donald Trump was some sort of specially weaponized candidate against the Democrats because the TV networks could not possibly skip his live events may find themselves very disappointed.  CNN’s indefensible “news” judgment on the VFW speeches suggests that this highly anticipated publicity spigot is going to be turned off now that Trump’s opponent is Hillary Clinton, and not other Republicans.