In the liberal lexicon, “backlash” is a word that only describes conservatives getting what’s coming to them. But as MSNBC reduces its number of shows and time slots for race-obsessed black hosts, this was bound to happen. The hashtag as the Left began to devour itself was “#MSNBCSoWhite.”

When MSNBC hired leftist hosts who were fixated on race, it was only natural that MSNBC would be trashed as "going white” when the reality of MSNBC’s terrible ratings for hosting seminars of academics about how badly America stinks cost Comcast some serious cash.

They gave the Rev. Al Sharpton a nightly show at 6 pm, It had absolutely nothing to do with the infamous race-baiter’s skill at television; he has none. It was all about stroking the ego of a leftist black activist. His mangling of the words on the Teleprompter was so routine that the word “malapropism” could be recategorized as “Sharptonism.” Early in his “career” at MSNBC, he proclaimed “but resist we much – we must – and we will much – about -- that -- be committed.” That laughable clip was all over conservative talk radio. That was just one of many. When they demoted Sharpton to a show on Sunday morning, he went quietly. 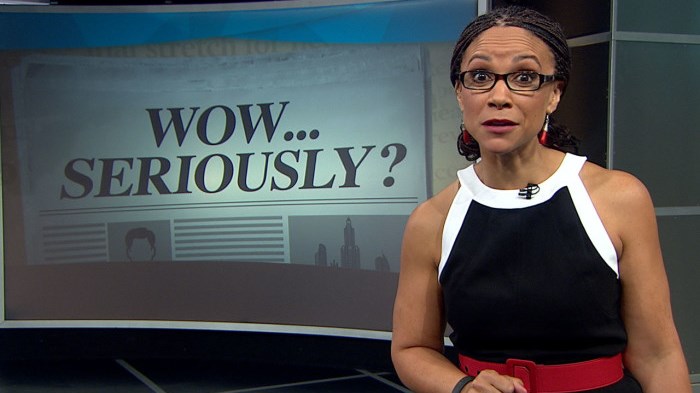 By contrast, professor Melissa Harris-Perry went out in a “Black Lives Matter” bender. When this self-described “over-educated” “scholar” felt her four-year-old show was being curtailed for weekend campaign coverage, she sent an outraged e-mail that leaked to The New York Times. “I will not be used as a tool for their purposes,” she wrote. “I am not a token, mammy, or little brown bobble head. I am not owned by [NBC News boss Andrew] Lack, [MSNBC president Phil]Griffin or MSNBC. I love our show. I want it back.” She claimed that her audience – which she calls “Nerdland” – was hurting.

One was almost waiting for Hurricane Katrina analogies: the NBC brass were drowning minorities with their floods of campaign chatter.

Then a longer memo with more Harris-Perry self-pity leaked out. She was outraged at being left out of political coverage. “I have a PhD in political science and have taught American voting and elections at some of the nation's top universities for nearly two decades, yet I have been deemed less worthy to weigh in than relative novices and certified liars.” She burned every bridge with a rhetorical flamethrower.

ABC’s The View interviewed Harris-Perry on March 14 and she again slammed the race card on the table. “The history of ‘mammy’ is that mammy is the black woman who cares more about the master's family than about her own. And so, what I'm saying is I don't care more about MSNBC's reputation than I do about the Nerdland family, about the thing that we built, about our viewing audience and about our team.”

What she built, compared to Fox and CNN, would make molehills swell with pride.

She said her show’s end has 100 percent “racial implications” because her show was so diverse with its guest list. “Taking this show off the air, even if you put me, individually, back on as a host meant that the folks who sat at our table, whether they were transgender women of color, Latino Republicans, they just weren't going to be there anymore because we were the folks who put them on air each and every week.”

The ratings problems at MSNBC would be helped by curtailing the radical leftists. But the brass must know that conservatives and independents still won’t trust a network of Obama-tinglers and Hillary-boosters from Maddow to Matthews to Andrea Mitchell. They may have avoided an al-Jazeera dive, but the “leaning forward” mess continues.