[Excerpted from Whitewash by L. Brent Bozell and Tim Graham, 2007.]

"Later, when [Clinton lawyer] David Kendall called to discuss my appearance, I told him I had thought about him as I was going in to the interview. 'I heard your words of wisdom ringing in my ear,' I said."
'And which words of incredible wisdom were you hearing?' said David, going for the bait.
'Screw 'em," I laughed.
David, who was raised a Quaker, chuckled and said sheepishly, "It's an old Quaker expression.'
'Oh, like 'Screw thee'?
We were both laughing hard now, letting off steam." - Hillary Clinton recounting the high-spirited aftermath of her "vast right wing conspiracy" interview on NBC, as recounted in her 2003 memoir Living History.

"I guess that will teach them to f- with us." - Hillary speaking to friend Harry Thomason in the White House solarium after the NBC interview, as recounted in Jeffrey Toobin's book A Vast Conspiracy.

Hillary Clinton looked tired and puffy under the lights on the Today set, six days after the Monica Lewinsky story broke, and the day after she stood behind her husband and applauded after he wagged his finger and insisted "I did not have sexual relations with that woman, Miss Lewinsky...These allegations are false.”  A squadron of TV satellite trucks waiting to capture her arrival at the NBC studios at 5:30 in the morning. "She knew the stakes for this first interview," author Jeffrey Toobin reported, "and she reveled in the action."

It was the morning of Clinton's State of the Union address, which he refused to cancel or postpone despite the emerging story of the 49-year-old president's illicit affair with a 21-year-old intern. Hillary had booked her interview weeks in advance to publicize this speech and talk about her latest safe First Lady cause, preserving the nation's historic treasures. Her aide Sidney Blumenthal, a lover of conspiracy talk, wrote in his tome The Clinton Wars that he told her to hit the conservatives, to say: "There are professional forces at work whose only purpose is to sow division by creating scandal."

NBC's Matt Lauer tried to begin gently, asking if the President described his relationship with Monica Lewinsky to her in detail, two which Hillary answered, "Well, we've talked at great length, and I think as this matter unfolds, the entire country will have more information." That was no answer, so Lauer tried again, a different way. "But he has described to the American people what this relationship was not in his words. Has he described to you what it was?" Again Mrs. Clinton replied with a creepy non-answer: "Yes. And we'll find that out as time goes by, Matt. But I think the important thing now is to stand as firmly as I can and say that, you know, the president has denied these allegations on all counts, unequivocally. And we'll see how this plays out."

Notice the double-talk here. Hillary had spoken with her husband “at great length” but “we’ll find out” what the truth was.  And she could “stand as firmly as I can and say” ...that her husband had denied the allegations. Would any wife who wasn't so graspingly ambitious, so politically calculating, respond to charges she thought were outrageously false by suggesting so impersonally "we'll see how this plays out"? Would any normal wife tell millions of American women the answer was unimportant, that "We'll find that out as time goes by"?

Next Lauer asked if she knew her president had given gifts to Lewinsky, to which Hillary answered, "I've seen him take his tie off and hand it to somebody....He is kind. He is friendly. He tries to help people who need help, who ask for help."She wanted to change the subject: "But I'm very concerned about the tactics being used and the kind of intense political agenda at work here."

Lauer said he would get to independent counsel Kenneth Starr, but had a few more questions about Monica Lewinsky. Did she know, or had she ever met, Lewinsky? "No." Had White House aide  Evelyn Lieberman, who forced Lewinsky out of the White House and into her Pentagon job, warned her of the intern problem? "No" again. Wasn't it odd that Lewinsky, as an intern, would be interviewed for a U.N. job by the U.N. ambassador Bill Richardson, and helped with job interviews by presidential pal Vernon Jordan? Hillary spoke again of the great kindness of the people she knew.

When Lauer turned to the subject of Starr, the tone of the interview suddenly changed. The tough questions stopped, replaced by an avalanche of sympathy: "So if what you have heard is something you can believe and if what the president has told the nation is the whole truth and nothing but the truth, then you'd have to agree that this is the worst and most damaging smear of the 20th century?" Hillary demurred, "Well, I don't know. There have been a lot of smears in the 20th century. But it's a pretty bad one."

And then, the moment arrived. Lauer quoted James Carville -- "Great American," Hillary interjected – declaring that this was now a war between the White House and Ken Starr. This allowed Hillary to pull the pin on Sid Blumenthal’s grenade and deliver what would become one of the most infamous lines of the Clinton presidency: 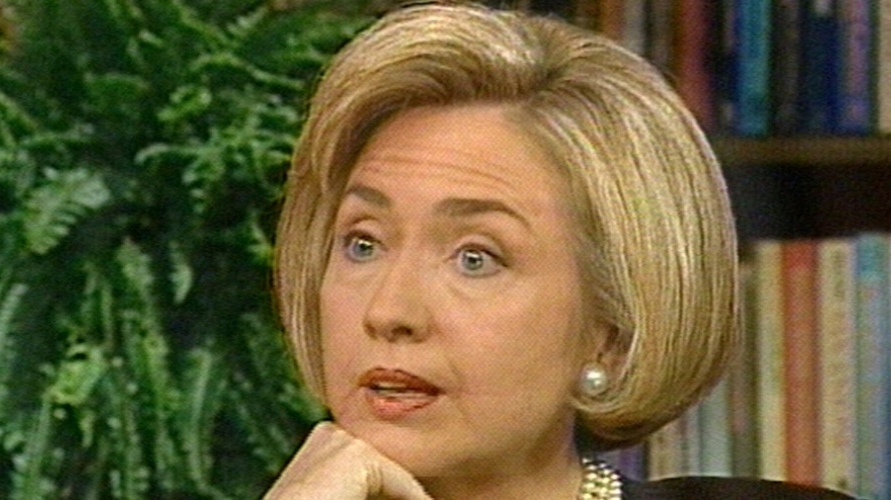 "This is – the great story here for anybody willing to find it and write about it and explain it is this vast right-wing conspiracy that has been conspiring against my husband since the day he announced for president. A few journalists have kind of caught on to it and explained it. But it has not yet been fully revealed to the American public. And actually, you know, in a bizarre sort of way, this may do it."

The last creepy section of the interview erupted when Lauer asked, point blank: " If an American president had an adulterous liaison in the White House and lied to cover it up, should the American people ask for his resignation?"

Hillary wanted to duck: "Well, they should certainly be concerned about it."

Lauer asked again: "Should they ask for his resignation?"

Hillary the defense lawyer erupted with "Well, I think that-if all that were proven true, I think that would be a very serious offense. That is not going to be proven true." Across the country, skeptics of the Clintons had their faces screwed up, repeating "Proven true?" If it wasn’t proven true it was okay?

Interviewed for this book, Landmark Legal Foundation president and popular syndicated radio host Mark Levin sized on Hillary’s last answer. As Levin pointed out, Hillary told the American people innumerable times that “it was a personal matter,” and yet there she was on national TV saying “If it can be proven” – thus inviting, or the very least recognizing the necessity for, public scrutiny. And then Levin demolished Mrs. Clinton’s argument: “It was proven and he didn’t resign, did he?” But the most troubling aspect of that line, Levin astutely noted, was what it revealed about Hillary herself: “She knew it was true, so she was misleading Matt Lauer and the American people.”

Fox News host Sean Hannity agreed. “Considering what we now know about Bill Clinton, for her to turn around and blame everybody for Bill’s problems, indiscretions, and lies says a lot about her,” he told us. “She’s an enabler. It reeks of somebody putting her ambition above everything else, including the truth, and the ability to tell the truth to the American people.”

Hillary wasn’t going to play defense. As we’d already seen the Clintons do numerous times, it was incumbent to put the accusers on trial, and what she said next was, almost unquestionably, a threat: "I think we're going to find some other things. And I think that when all of this is put into context, and we really look at the people involved here, look at their motivations and look at their backgrounds, look at their past behavior, some folks are going to have a lot to answer for."

What was Hillary implying?  Had she already seen the files on Republican foes Henry Hyde and Dan Burton, whose reputations and credibility were ultimately dealt damaging blows when their own extramarital affairs were exposed?

Within hours of the interview, reporters would be leaping not to demand a documentation of this bizarre accusation of a “vast right-wing conspiracy” – but to advance it as credible. They obliged with an enthusiasm that surely brought smiles of satisfaction to “great Americans” like James Carville and Sidney Blumenthal.