The first wave of analysis after the mass shooting in San Bernardino suggested that this could be a right-wing militia or anti-government conspiracy. This is the default position of the anti-conservative press: unless shown otherwise, it was one of those right-wingers.

Then they named the suspects, Syed Farooq and his wife Tashfeen Malik. Remote controls were surely tossed across America when CNN legal analyst Casey Jordan guessed that the Muslim shooter was “going into this conference room where there was a holiday party, which may have been offensive to him.”

The media have harbored anti-religious bigotry for years. But now it’s turned vicious. This tragedy drew out liberal animus against those offensive “prayer people” who won’t back gun control. Washington Post columnist Gene Weingarten angrily announced on Twitter: “Dear ‘thoughts and prayers’ people: Please shut up and slink away. You are the problem, and everyone knows it.”

Agile critics on Twitter soon sent back a flock of official White House tweets from President Obama himself expressing “thoughts and prayers” after the terrorist attacks and during the Ebola epidemic. On the morning after the San Bernardino attack he again offered his “thoughts and prayers” to the victims, proving one can be prayerful and agitate for gun control simultaneously. 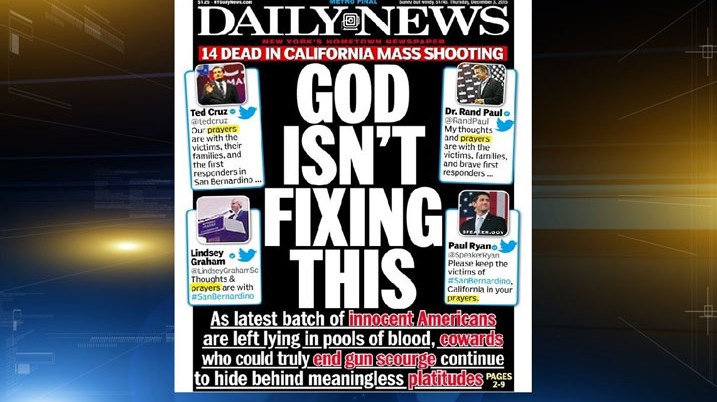 The New York Daily News really turned the volume up, with this ranting tabloid headline: “GOD ISN’T FIXING THIS.” The subheadline below said “As latest batch of innocent Americans are left lying in pools of blood, cowards who could truly end gun scourge continue to hide behind meaningless platitudes.”

For a major city newspaper to use their front page to mock people who are praying after what happened in San Bernardino is unconscionable and unbefitting a publication that purports to be a serious media outlet. This newspaper should have apologized for comparing prayer to “meaningless platitudes” – both to Republican leaders and to people of faith -- and then fired the person responsible for approving such a vile front page and cover story.

The Lichter-Rothman “Media Elite” surveys back in 1981 revealed that 50 percent of the news media did not believe in God and 86 percent seldom or never went to church or synagogue. You can only surmise that it’s worsened dramatically since then. If you don't want to believe in God, it’s sad but acceptable. But the Daily News lunged far further, ridiculing people of faith for offering simple prayers after a massacre.

No one in the liberal media seemed to think this might offend the audience at home, who were sending their prayers for the victims. CNN, the same people who air legal analysts who wonder about murder being caused by offensive “holiday parties,” couldn’t see why that nasty front page might be revolting, and promoted it hour on the hour. Anchorman Don Lemon read most of the front page on the air, and asked a spokesman for the liberal Brady Campaign for a response. On cue, Dan Gross said, “Religion doesn’t need to be part of this conversation.”

NBC’s Andrea Mitchell suggested it was a natural rebuke: “All the talk of prayer prompted an angry tabloid headline in today’s New York Daily News.” On CBS, morning anchor Gayle King offered <ital>praise<ital> for this junk: “I thought that headline was very powerful.” Later, co-anchor Charlie Rose added to the offense: “As the New York Daily News said, God is not going to fix it We have to fix it.”

Our largely secular press forget that radical Muslims see America as the Great Satan, as godless. Their promotion of this bigoted rant against God only deepens the terrorists’ hatred for our country.

We offer our prayers. It’s what civilized people do.