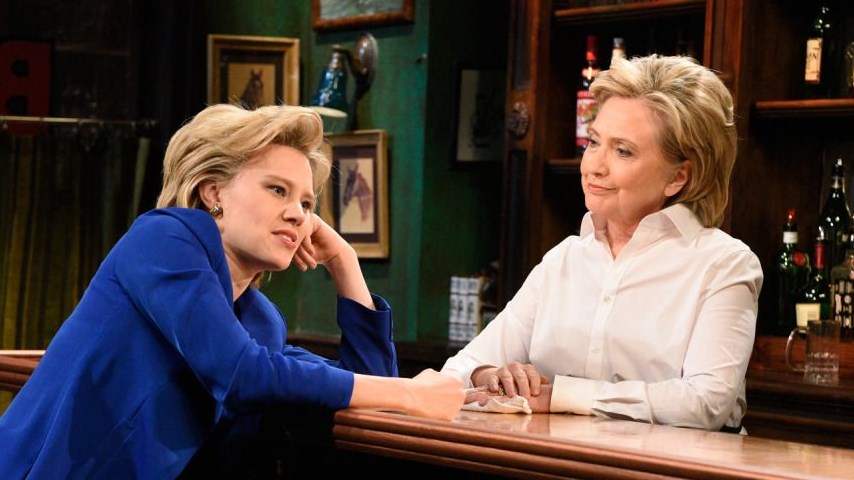 The Daily Beast was blunt in a headline: “Saturday Night Live Premiere Basically a Hillary Clinton Campaign Ad.” Writer Kevin Fallon documented how the aid and comfort for Mrs. Clinton wasn’t just in the skit where she played a bartender to the show’s Hillary impersonator.

The show began with a spoof of Mr. And Mrs. Donald Trump, with the satirical message “Melania’s praise of her husband’s presidential bona fides surreptitiously illuminates the lunacy of his candidacy.” Then came a fake commercial which “continued the damnation of the Republican presidential candidates, advertising Abilify, the drug for people who think they can be president.”

Later, the fake newscast “took aim not just at the GOP field, but at Bernie Sanders and Joe Biden as well, all in the pursuit of shaming viewers through comedy. The seeming moral of the punchlines: Can anyone sane really vote for anyone but Hillary?”

The Democrats have an overwhelming advantage on late-night comedy shows and other non-news shows, from “The View” to MTV to BET to Comedy Central. Comcast is just getting the softball rolling.

Sharpton’s interview on MSNBC was the usual hand-holding special. Here’s a typical question: “I`m going to say two words to you, Donald Trump. What do you think?” There was the usual misquotation of Republicans. “Jeb Bush said in addressing an issue about why there weren`t a lot of blacks at a particular gathering he was addressing, and he, among other things said, they were offered free stuff by Democrats. How do you respond to that?”

The transcript shows Hillary was allowed to give four-paragraph answers as Sharpton nodded. One answer on crime and race was 514 words long, almost as long as the column you're now reading.

On Monday morning, the syrup flowed again as Hillary was talking and  flipping pancakes in New Hampshire. These “town hall” meetings are stuffed with Hillary fans who praise her or ask silly personal questions – all the better to help “humanize” the robotic candidate. Here’s a sample:

– “I'm wondering what your favorite celebratory unhealthy drink is.”

– “My question is : What is your favorite book?”

– “Many years ago we saw another Clinton at his inauguration play an instrument and have a song. What song or instrument would you play at yours?”

Other Hillary fans asked her to explain her ideas on gun control, college debt, and whether they were any Republicans in Washington who would work with her. The only two questions that seemed even mildly challenging to her came from Bernie Sanders fans.

NBC anchor Savannah Guthrie also interviewed Mrs. Clinton. At least she focused on the e-mail scandal, but it often seemed like another Sharpton interview, forwarding Democratic talking points. “You're scheduled to testify before that [special Benghazi] committee. Do you think it should be disbanded? That's what Nancy Pelosi has called for.”

Every Republican running to face Hillary knows that the news and entertainment conglomerates in Manhattan and Hollywood are going to lay down miles of red carpet for Hillary to walk on. Whether all that help will ever warm up Hillary’s image remains to be seen. But the effort will be Herculean.