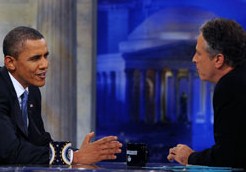 In November of 2002, Washington Post reporter-editor Bob Woodward unveiled excerpts of his latest book, Bush at War, and created a big stir by revealing that Fox News boss Roger Ailes had sent a “back-channel message” to the Bush White House shortly after 9/11. He had  insisted the president talk tough against the terrorists.

The liberal media seized on this report as proof that the Fox News Channel was a tool of George W. Bush (or maybe it was that Bush was a tool of Fox).  But all Ailes had done was encourage the president to rally the country after the worst domestic terrorist attack in our history.

Was this press-driven controversy fueled by anti-conservative biases? Consider this: At the same time Ailes was supporting Bush, CBS anchor Dan Rather was breaking down on the Letterman show and declaring “George Bush is the President. He makes the decisions, and, you know, it's just one American, wherever he wants me to line up, just tell me where.”

In the Obama administration, journalists have sauntered in and out of White House meetings with (not notes sent to) President Obama, with no brow-furrowing and harrumphs from their peers.

Still, it came as a surprise when Politico reported that liberal comedian and The Daily Show host Jon Stewart made two secret visits to the White House, during a shutdown fight in October 2011 and again in January 2014.  Controversial? Not on your life. Politico gushed it “speaks volumes about Stewart and his reach” that he would be summoned by the president.

“Top Obama aides David Axelrod and Austan Goolsbee knew Stewart’s voice mattered and made sure to field calls and emails from the host and Daily Show staff,” it continued. “Axelrod, a frequent Stewart guest, kept in touch with the host by phone and e-mail.”

Goolsbee sent messages to his former Yale classmate Steve Bodow, who joined The Daily Show in 2002 and is now an executive producer. “That work-the-umps strategy also involved the president, who used his two Oval Office meetings with Stewart as a chance to sell the administration’s ideas.”

Politico wanted to explain how much Jon Stewart mattered, but ended up painting a picture of Stewart as just another biased and pompous anchorman – a political “umpire” – that needs to be flattered and spun. 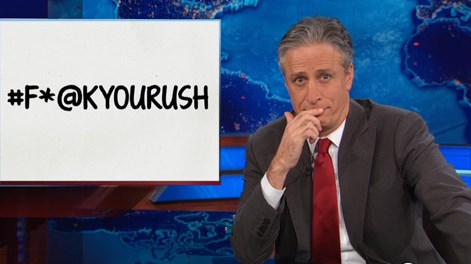 Naturally, on his way out the door at Comedy Central, Stewart tried to turn the whole story into a nasty joke. After playing a series of Fox News clips reporting on the secret meetings, he announced one Obama meeting included Elvis and a space alien and the meeting opened with “the traditional Saul Alinsky prayer” before they “took turns [sexually penetrating] a replica of the Reagan eye socket.” But wait, it gets worse. “The real Reagan eye socket is kept in the Smithsonian, and is only f—ed on Christmas.”

This kind of “comedy” mocking Christian Fox-watching Reagan admirers is his daily dish. This is why liberal journalists adore him. In the Bush years, NBC anchor Tom Brokaw slammed Rush Limbaugh & Co. for leading a “telephonic jihad” and then claimed  with a straight face in Time magazine that Stewart exposes political “juvenilia,” that “Jon Stewart was our Athenian, a voice for democratic ideals and the noble place of citizenship.”