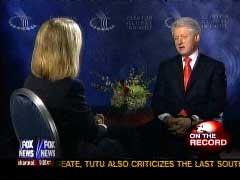 No one asked if Clinton’s outburst hurt the publicity for his “Clinton Global Initiative.” (It didn’t help.) The first question was: staged outrage, or a spontaneous reaction? It’s quite a commentary on the Slick One that millions on both sides of the political fence would guess he plotted this tantrum in advance. Count me in on that number. I believe it was staged, a plan to please left-wingers who loathe Fox News with a passion and want them demonized as the communications center of the Vast Right Wing Conspiracy.

Clinton’s hot-tempered answer simply does not match the question from Chris Wallace. The central question was tough, but restrained, based on a book written by Lawrence Wright, a writer for The New Yorker, not a conservative magazine, to put it mildly. It was not unlike the typical question Tim Russert would ask his guest. But Wallace may have tripped a trigger by mentioning Clinton’s 1993 debacle in Somalia, primarily because it’s something every other interviewer skips. The roughest part came when Wallace quoted Osama bin Laden from that Wright book. In the wake of the Somalia debacle, bin Laden reportedly stated "I have seen the frailty and the weakness and the cowardice of U.S. troops."

What came flying out of Clinton’s mouth sounded like vintage Hillary. Fox is asking me this because “ABC just had a right-wing conservative” show on 9/11! “President Bush’s neo-cons” thought I was too obsessed with bin Laden, and they did nothing before 9/11! At least I tried to get Osama, unlike “the right-wingers who are attacking me now!”

But Clinton sounded stranger when he attacked Wallace personally: “So you did Fox’s bidding on this show. You did your nice little conservative hit job on me.” And then it grew even more bizarre: “You set this meeting up because you were going to get a lot of criticism from your viewers because Rupert Murdoch’s supporting my work on climate change.” If Murdoch has grown more supportive of the Clintons, then why would he conspire to ruin Clinton’s Fox appearance?

Wallace was certainly surprised – stunned would better describe it – by Clinton’s intensity. When asked to explain it later, Wallace said he read the transcripts of Clinton’s other media appearances, including CNN’s “Larry King Live,” NBC’s “Meet the Press,” and FNC’s own “On the Record with Greta Van Susteren.” He was “astonished” that none of these bothered to raise the question of Clinton’s presidential performance on terrorism, even in the wake of all the furor Team Clinton raised trying to kill off ABC’s docudrama “Path to 9/11.” That list doesn’t include Clinton shoe-shiners like Jon Stewart of “The Daily Show” or MSNBC’s resident Chihuahua, Keith Olbermann.

You can’t really be astonished by Larry King, whose usual tough question would be along the lines of  “Jif or Skippy, Mr. President?”  I exaggerate, but not by much. Here’s an actual Larry King question to Clinton from last week: “Now, the purpose of your initiative overall is to make the world a better place, right?...Is it a better place?” You can’t be that astonished by Greta van Susteren, who’s the designated puffball interviewer of both Clintons for FNC. (And that’s another nail in the coffin of that alleged Murdoch conspiracy.)

The real disappointment on this list is Russert, the man who built a reputation for grilling politicians with long text boxes of challenging information. But for Clinton, Russert delivered a Larry King performance. His actual first questions: “The second year of the Clinton Global Initiative. What did you achieve this year?...Do people keep their commitments?” Then he went on to other toughies. Is Dick Cheney wrong on Iraq? And when Hillary runs, are you ready for the nasty attacks on her?

The second annual meeting of the Clinton Global Initiative was more proof that Clinton walks around with the major media in his jacket pocket. Look no further than the long list of so-called “featured attendees” who associated themselves with the event. Many of them were moderators of panel discussions – not only predictable names like George Stephanopoulos, but Tom Brokaw, Judy Woodruff, Newsweek international editor Fareed Zakaria, CNN anchors Zain Verjee and Sanjay Gupta, and NPR anchor Michele Norris. Katie Couric, Diane Sawyer, and Christiane Amanpour were also on the list of supportive media attendees.

It’s easy to see from this display that Clinton is a pampered peacock, a prima donna who expects the media elite to love him, and explodes like a spoiled child when anyone dares challenge him. He only expects a challenge from the radical right-wingers at Fox. That’s what he calls anyone who would ruffle a fine feather of his glorious legacy-building project.