HBO’s The Newsroom debuts its second season tonight (Sunday) at 10 PM EDT/PDT. The preachy and sanctimonious left-wing dialogue from creator/writer Aaron Sorkin often came across as unintentional near-parody of MSNBC’s old Countdown with Keith Olbermann, none more so than in the self-righteous commentary delivered by anchor “Will McAvoy,” played by Jeff Daniels, in the first season finale.

“McAvoy” went on a diatribe about the evils of the Tea Party, a particularly alien from reality plot line given what we’ve learned since that Tea Party groups were victims of government abuse by the IRS.

In the episode first run back on Sunday, August 26, 2012, “McAvoy” keys of supposed Tea Party efforts to deny the vote to an elderly black woman. After a list of Tea Party evils, including “denying science,” “unmoved by facts,” “a need to control women’s bodies,” “severe xenophobia” and “intolerance of dissent,” he wraps up with this Olbermann-inspired denunciation:

Daniels plays the anchor of a prime time newscast on the ACN cable network, which is run by a woman played by Jane Fonda.

Excerpts from what’s in the video:

They believe in loving America, but hating its government. Conservative activist Grover Norquist...

And one other blank in the Tea Party platform: If you’re poor, it means you’re either too lazy or too stupid to be rich... 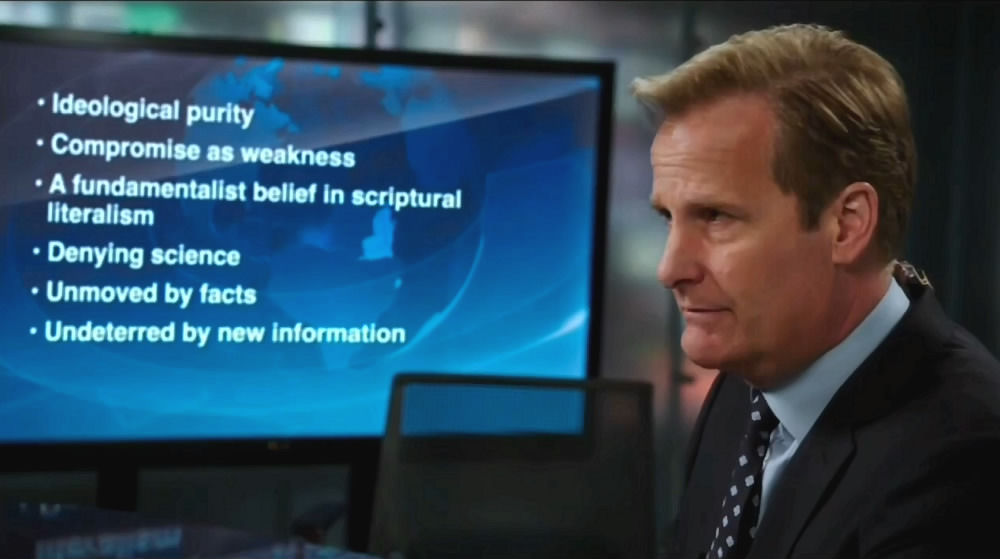 Ideological purity. Compromise as weakness. A fundamentalist belief in scriptural literalism. Denying science. Unmoved by facts. Undeterred by new information. A hostile fear of progress. A demonization of a education. A need to control women’s bodies. Severe xenophobia. Tribal mentality. Intolerance of dissent and a pathological hatred of the U.S. government.