“After 13 years with ABC News, correspondent Jim Sciutto is leaving the network and TV news. He’s moving to China where he’ll be Chief of Staff to U.S. Ambassador to China Gary Locke,” TVNewser’s Chris Ariens reported Thursday in noting the latest journalist to join the Obama administration, this time working for Locke, the former Democratic Governor of Washington.

Sciutto should certainly feel comfortable promoting Obama’s interests and how he is a blessing to the world since that’s what he used his ABC News position to do. The night after Obama’s inauguration, for instance, Sciutto delivered a piece for World News with soundbites from naive kids around the world sputtering beauty pageant-like simplicities about how President Barack Obama will bring “world peace” and inspires them to say “yes, we can!”

In the story the day after the inaugural (video above), as I recounted in a January 22, 2009 NewsBusters post:

Sciutto touted how “we heard children around the world expressing hope and fascination with the new American President.” Viewers heard a boy in Russia yearn for “peace, democracy and friendship” and a girl in the United Arab Emirates assert “he's interested in giving peace to the world and stopping wars,” all before a boy from Indonesia promised: “He’s going to change the world and make world peace.” From Gaza, a kid hoped Obama will “prevent Israel from attacking us.” 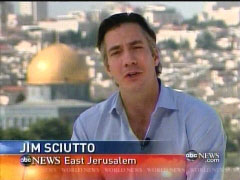 From Pakistan, Sciutto relayed, “hope for an American President with a Muslim father.” A boy then wished “he can make the citizens of the U.S. recognize that we, not all Muslims are terrorists and not all terrorists are Muslims.” And what story on foreign reaction would be complete without input from France? A French girl: “I think that he may stop the war in Iraq. At least I hope he will.”

Earlier, the morning after the 2008 election, Sciutto espoused the world’s joy as he celebrated international reaction to Obama’s victory, describing the President-elect as “the winner who’s capturing the world’s heart.” As the MRC’s Scott Whitlock relayed in 2008:

Then, taking a shot at President Bush, he added: “That's what we keep hearing in so many places around the world, a sense that Barack Obama embodies the American dream, a dream that, frankly, has been tarnished overseas in recent years by a very unpopular war in Iraq, a very unpopular president in President Bush.”

After highlighting the joyous reaction around the world, Sciutto summed the glowing critique up by reading an e-mail from an Italian woman received in ABC's Rome bureau. He recited, “Dear friends, your country has renewed faith that all is possible. Welcome back, American dream.” Sciutto closed by asserting: “It's that kind of emotion around the world now.”