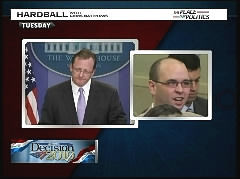 The obfuscation displayed by White House Press Secretary Robert Gibbs on Tuesday, in refusing to address factual contradictions in the Joe Sestak job offer storyline, is so obvious that even MSNBC's Chris Matthews on Wednesday night showcased a “kerfuffle” between Gibbs and CNSNews.com's Fred Lucas who dared to point out a Congressman cannot serve in the un-paid board position reportedly offered to Sestak if he refrained from running against Senator Arlen Specter.

Matthews declared of Gibbs, who wouldn't go beyond repeated “I'd refer to the memo” deflections: “That is a big case of bluffing and BS.”

An hour later on FNC, columnist Charles Krauthammer marveled: “The indifference of the press to what the White House issued last Friday [is] really quite remarkable. This statement is Swiss cheese. It's got holes in it all over the place and it doesn't add up.”

Nonetheless, after perfunctory coverage on Friday night, brief follow-ups on Saturday of a holiday weekend and scattered references on the Sunday interview programs, ABC, CBS and NBC have moved on from a subject they hadn't bothered to explore until the pre-holiday weekend White House statement.

On Wednesday's Hardball, Matthews played a clip of Lucas, from the MRC's CNSNews.com site, trying to get Gibbs to name the advisory board to which Sestak was supposedly promised an appointment. Lucas pointed out that a Member of Congress cannot serve on the President's Intelligence Advisory Board.

The CNSNews post, “White House Spokesman Has No Answer on Sestak Job Offer; ‘I’d Refer You to the Memo,’” with video, provides this transcript, from Tuesday, of what Matthews played on Wednesday's Hardball:

CNSNEWS.COM: Okay, and just one more -- sorry. But the [Presidential] Intelligence Advisory Board, which most reports said this offer was for, that would be a position a member of the House could not serve on. Is that-

MR. GIBBS: That’s how I understand the way the PIAB is written.

CNSNEWS.COM: But the memo, it said that this would be a position to serve in the House and serve on a presidential advisory board.

CNSNEWS.COM : Well, how could he sit on the board?

FOX NEWS REPORTER MAJOR GARRETT: Yes, how would that work?

NYT BAKER: So why was your offer-

CNSNEWS.COM: So that wasn’t the offer, then?

CNSNEWS.COM: What position, what board, was it then? Do you know?

MR. GIBBS: I’d refer you to the memo.

CNSNEWS.COM: But the memo didn’t specify.

More in a second CNSNews post, with the same video of the exchange: “Gibbs Won't Say What Job Sestak Was Offered.”

Lucas also raised how the White House's report referred to conversations in June and July last year, while Sestak has cited a single earlier conversation with Bill Clinton.

The contradictions intrigued the panel on FNC's Special Report with Bret Baier where he cued up Krauthammer: “There's the question of what board he could have served on. There was talk of an intelligence board, but at least according to that board, you have to be outside of government. Couldn't keep his House seat.” 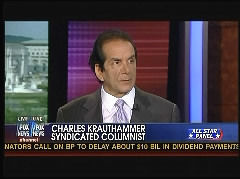 Well, that's what makes the indifference of the press to what the White House issued last Friday really quite remarkable. This statement is Swiss cheese. It's got holes in it all over the place and it doesn't add up.

As you said, it said that there were efforts made through June and July and yet Sestak pretends, or has said, there was one call lasting a minute or less from Bill Clinton. Well, that can't be June and July. There must have been other offers. Who were they? So, there is a contradiction there.

It's for advisory position, we are told. But when Sestak was asked about this originally, months ago, his answer was I was offered a job. He's not a fool. He has been around. He's an Admiral. He's been in House of Representatives. He knows the difference between a job and an appointment on a federal advisory commission.

And lastly, as you say, he wasn't even eligible. So, we are to believe that a two-month effort to entice him to drop out of the race consisted of a one-minute phone call in which he was offered a job for which he's ineligible and which he says, himself, is not now a real job.