NBC Nightly News Takes Up ClimateGate, But Frets It Could 'Delay Taking Action' 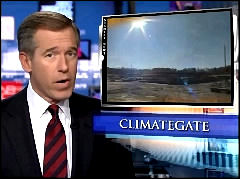 Two weeks after the scandal broke, NBC Nightly News on Friday night became the first broadcast network morning or evening news program to inform viewers about “ClimateGate,” but only in the most cursory manner as correspondent Anne Thompson, a long-time ally of the environmental left, despaired the e-mails may end up “giving politicians from coal and oil-producing states another reason to delay taking action to reduce emissions. The government's leading scientist told Congress there is no time to lose.”

Anchor Brian Williams had teased: “ClimateGate, they're calling it. A new scandal over global warming and it's burning up the Internet. Have the books been cooked on climate change?” But neither Williams nor Thompson ever again used the “ClimateGate” term as Thompson's story assured viewers the threat remains while she saw -- not a major scientific scandal -- but merely how “those who doubt that manmade greenhouse gases are changing the climate say” the e-mails “show climate scientists massaging data and suppressing studies by those who disagree.”

Thompson, who in 2007 declared “the scientific debate is no longer over society's role in global warming. It is now a matter of degrees,” allowed soundbites from a Republican Congressman and Patrick Michaels of the Cato Institute, but countered with how “25 leading U.S. scientists accused climate change opponents of misrepresenting the e-mails' significance” and, after a clip of left-wing activist Michael Oppenheimer, she fretted over how, as quoted above, the e-mails will “delay” vital action. Thompson concluded with NOAA's administrator: “Climate change is not a theory. It is a documented set of observations about the world.”

(The Media Research Center on Friday issued a press release mocking the network silence on ClimateGate: "Day Fourteen and Counting.") 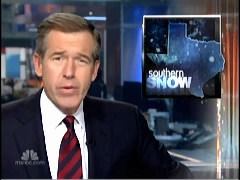 And there’s weather in the news tonight. Snow today in Houston, Texas. Weather experts say it is the earliest snowfall on record in that city. As much as four inches fell in some places, snarling travel. And in a city on the Gulf of Mexico with no salt spreaders, Houstonians are being warned to stay indoors tonight as it gets colder there. Already a big mess at the airport. A lot of preemptively cancelled flights.

President Obama didn't go far enough for Thompson when he addressed the UN in September, as reported in a NewsBusters post:

Reporter Anne Thompson wistfully recalled that “when Barack Obama became President, many in the world hoped the U.S. would take a leadership role in stopping climate change” and so “that led to big expectations for today's speech -- expectations that were quickly dashed.” Thompson asserted “the world wanted to hear President Obama make a commitment to specific cuts in carbon dioxide emissions. Instead of action, it got talk” and, in the ultimate insult a journalist can deliver, she rued how Obama had “one line that sounded a lot like his predecessor, George W. Bush, who refused to agree to emission cuts without similar actions from India and China.” 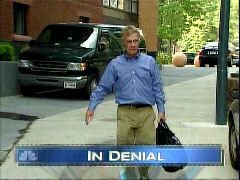 Reporter Anne Thompson began her crusading piece with "In Denial" on screen over video of the Cato Institute's Patrick Michaels. She fretted about "interest groups fueled by powerful companies, including oil giant ExxonMobil." Citing the far-left Union of Concerned Scientists, she highlighted their claim that "ExxonMobil gave almost $16 million over seven years to denier groups, including the Competitive Enterprise Institute."....

Touting Michael Oppenheimer as an expert, whom NBC identified only as an "atmospheric scientist" with Princeton University, Thompson asserted that "climate experts say whether hired guns or honest dissenters, deniers are confusing the issue and delaying solutions." Oppenheimer, who NBC failed to note is "science adviser" to the left-wing Environmental Defense organization, ominously warned: "This is a problem that needs to be attended to very soon, immediately, or else it threatens to get out of control." Thompson's conclusion echoed: "The scientific debate is no longer over society's role in global warming. It is now a matter of degrees."

The MRC's Brad Wilmouth corrected the closed-captioning against the video to provide this transcript of the story on the Friday, December 4 NBC Nightly News:

BRIAN WILLIAMS: There was a surprising announcement just a short time ago from the White House. President Obama has changed his plans, now says he won’t attend the beginning of that U.N. conference on climate change next week in Copenhagen. Instead, he’ll attend at the end of the conference when leaders from China and India will be there. And, as the world prepares to tackle this issue, there’s a new scandal that’s burning up the Net these days. It began with emails that were stolen, and the scandal has to do with climate change. Our chief environmental affairs correspondent, Anne Thompson, has our report. 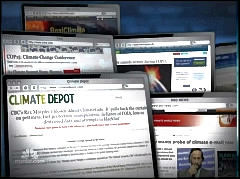 ANNE THOMPSON: The hottest debate in the blogosphere is about changes in the earth’s atmosphere and what stolen emails reveal about some data supporting global warming. Those who doubt that manmade greenhouse gases are changing the climate say these e-mails from Britain’s University of East Anglia show climate scientists massaging data and suppressing studies by those who disagree. That’s led to angry headlines on both sides of the Atlantic, and angry politicians.

REP. JAMES SENSENBRENNER (R-WI): It’s junk science, and it is a part of a massive international scientific fraud. 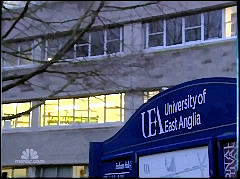 THOMPSON: The uproar is having an impact. The United Nations today said it would investigate the emails, but did not back away from the science that led it to determine man is responsible for global warming. Still, critics say the emails show catastrophic predictions of countries and people devastated by warming need to be reconsidered.

PATRICK MICHAELS, CATO INSTITUTE: There are clear problems with these records that deserve investigation, and not providing them to people because they’re, quote, “going to find something wrong with it,” is just not the way we’re supposed to do science.

PROFESSOR MICHAEL OPPENHEIMER, PRINCETON UNIVERSITY: I think the e-mail scandal is being used as a political side show to deflect interest in actually dealing with climate change. I think, in that regard, it will fail. 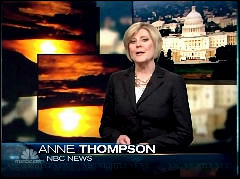 THOMPSON: Even more than in Copenhagen, some think the e-mails will have the greatest impact in Washington, giving politicians from coal and oil-producing states another reason to delay taking action to reduce emissions. The government’s leading scientist told Congress there is no time to lose.

JANE LUBCHENCO, NOAA ADMINISTRATOR: I emphasize that climate change is not a theory. It is a documented set of observations about the world.