Instead of focusing on how the Obama administration found it appropriate to hire a man who added his name to a petition asserting the Bush administration deliberately allowed the 9/11 attacks to occur -- or the incompetence displayed in not knowing about it -- ABC and NBC on Sunday night painted Van Jones as a victim, “a target for conservatives,” while “the Republican Right” claimed “its first scalp in this administration.” [audio available here]

With “Under Fire” on screen by a picture of Jones, as if he's the aggrieved party, World News anchor Dan Harris fretted that “at this crucial moment,” with President Obama planning to take up health care, “the White House is now dealing with a sudden overnight resignation of a controversial adviser.” Reporter Stephanie Sy stressed how Jones' remarks on various topics “were all made before he joined the Obama administration, but made him an easy target for conservatives.” She acknowledged Jones “in fact did describe himself as an aspiring communist revolutionary in his youth,” but, she highlighted, “he said he is the victim of a 'vicious smear campaign of lies and distortion.'” Sy featured Howard Dean lamenting Jones will no longer be able “to help this country,” before she concluded: “Democrats worry that Van Jones is only the first of Mr. Obama's so-called policy czars...that will be targeted by Republicans.”

Inadvertently, presumably, NBC anchor Lester Holt conceded the mainstream media's malfeasance: “I don't think most Americans had heard of him before this.” Holt then asked John Harwood: “Can the Republican Right claim its first scalp in this administration?” Harwood pointed to how Obama “lost” Tom Dashle, and proceeded to agree that “yes, it is a victory for the Republican Right,” though he insisted “Jones was not an especially important figure within the administration. His job wasn't that big.”

Sunday night, the CBS Evening News limited Jones coverage to a short update by anchor Russ Mitchell. On Friday, CBS was the only broadcast network evening newscast to have run a story on Jones.

♦ From Friday night, with an update on the lack of coverage on Saturday: “ABC & NBC Continue Van Jones Blackout, Instead Tout Obama's 'Transparency' and Rue Attacks on Him.”

From the Sunday, September 6 NBC Nightly News, following the lead story from Mike Viqueira who had included Jones in a preview of Obama's health care speech and address to the nation's school students: 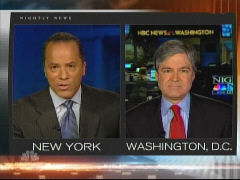 LESTER HOLT: John Harwood is CNBC's chief Washington correspondent. John, good to have you here. I want to start off with the Van Jones resignation. I don't think most Americans had heard of him before this, but can the Republican Right claim its first scalp in this administration, and how big a deal is it?

JOHN HARWOOD: Well, not their first scalp. Of course, the President lost Tom Dashle, who he wanted to be his health care czar, much earlier in the year. But yes, it is a victory for the Republican Right, and the White House simply couldn't afford to spend any time or energy at this critical point in the health care debate defending somebody who had been associated with that preposterous suggestion that the government allowed the 9/11 attacks to occur.

HOLT: But the President's opponents have spun the narrative of this to reinforce their notion that the President is dangerously left. Does that, in the long term, hurt more than just the loss of a particular aide or adviser?

HARWOOD: Well exactly, Lester. Van Jones was not an especially important figure within the administration. His job wasn't that big, but the President does face suspicions from some political opponents because of the exotic nature of his background, because of his name, because of some positions of his -- politically that he's taken that have shifted over time, that there's something secretly more radical or further left than he is letting on right now, and he can't afford to have that suspicious amplified or continued in the political atmosphere we're in right now. 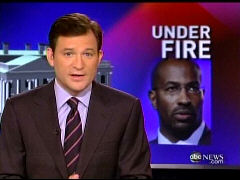 DAN HARRIS: Good evening. After a summer that has truly been a mean season for the White House, President Obama is now preparing to deliver two controversial speeches this week. On Tuesday, a live back to school speech to students, which has some parents threatening to pull their kids out of class. And on Wednesday night, he will address a joint session of Congress to try to salvage health care reform. But, at this crucial moment, the White House is now dealing with a sudden overnight resignation of a controversial adviser. So, we're going to begin here tonight with Stephanie Sy.

SY: Then this video emerged, in which Van Jones comments about the Columbine shootings.

SY: The remarks were all made before he joined the Obama administration, but made him an easy target for conservatives. When an organization Jones co-founded started calling for a boycott of popular talk show host Glenn Beck, the flood gates open.

GLENN BECK: We've told you that he is an avowed radical communist. 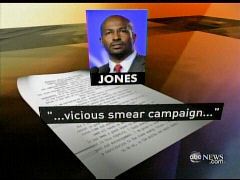 SY: The now-former green jobs czar and best-selling author in fact did describe himself as an aspiring communist revolutionary in his youth. But in a statement today, he said he is the victim of a “vicious smear campaign of lies and distortion.” The most damning criticism against Jones points to a petition he signed in the aftermath of 9/11, which called for an investigation into whether high-level U.S. officials had allowed the attacks to occur. Jones said last week that the petition never reflected his views, and he has apologized for his provocative statements, but in this political climate it wasn't nearly enough.

ROBERT GIBBS, ON THIS WEEK: The President accepted his resignation because Van Jones, as he says in his statement, understood that he was going to get in the way of the President.

SY: Democrat Howard Dean, who's political career took a tumble after the emergence of this one video [“Rahhhh!”], came to Jones' defense.

HOWARD DEAN: You've got to understand, Van Jones is a star. He really is. He has an extraordinary background. He was a guy who is really going to help this country, and now he's unfortunately just not able to do it and I think that's too bad for the country. 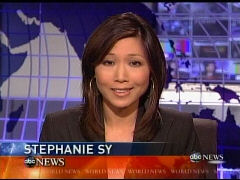 SY: With President Obama's approval ratings sliding and his key reforms up for debate, conservatives are going after any vulnerabilities in the administration. And Democrats worry that Van Jones is only the first of Mr. Obama's so-called policy czars, Dan, that will be targeted by Republicans.