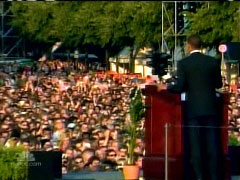 Before moving on from “Barack Obama's Magical Media Tour” of the past week, a look at an Associated Press story so over the top that the Washington Posts's Howard Kurtz on Friday cited it as an example of coverage which “bordered on gushing,” though in this case there really was no “bordered.” In the July 22 dispatch in advance of Obama's arrival in Berlin, “Obamamania in full flight ahead of tour of Europe,” the AP's Matt Moore and Melissa Eddy hailed how Obama's “superstar charisma” will meet “German adoration” with a promise to “redeem” America (as posted by Google, by Yahoo):

Europe is about to give Barack Obama one of the grandest of stages for statesmanship. In this city where John F. Kennedy, Ronald Reagan and Bill Clinton all made famous speeches, Obama will find himself stepping into perhaps another iconic moment Thursday as his superstar charisma meets German adoration live in shadows of the Reichstag and the Brandenburg Gate. He then travels to Paris and London where he can expect to be greeted with similar adulation.

It's not only Obama's youth, eloquence and energy that have stolen hearts across the Atlantic. For Europeans, there have always been two Americas: one of cynicism, big business and bullying aggression, another of freedom, fairness and nothing-is-impossible dynamism.

If President Bush has been seen as the embodiment of that first America, Obama has raised expectations of a chance for the nation to redeem itself in the role that — at various times through history — Europe has loved, respected and relied upon....

That AP story was posted under the original headline by USAToday.com (but did not appear in the newspaper) and under more gushing sub-heads on MSNBC.com (“Obamamania in full flight before Europe tour: Candidate's charisma and policies capture hearts across the Atlantic”) and CBSNews.com: “Obamamania In Full Flight Ahead of Tour of Europe: Obama to Bask In Europe's Adulation Amid Hopes for New Era In America Politics.”)

Later in their story, Moore and Eddy stressed how it is Obama's “anti-Bush” image which makes him so popular in Europe:

....But there appears to be a deeper mechanism behind Europe's palpable excitement over Obama than just a break from the acrimonious Bush years. After all, it's difficult to imagine the continent being swept by "Clinton-mania" or "Edwards-mania" had one of Obama's main rivals for the Democratic nomination prevailed.

For Europeans, perhaps, it isn't just that Obama isn't Bush but that he's come to be seen as the "anti-Bush" — a figure who represents such a startling contrast to the outgoing president that there's a sense the whole Washington power structure might be purged of much that Europeans see as wrong with American leadership....