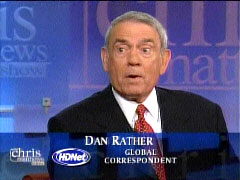 The tree doesn't grow far from the apple. A little under two years after Katie Couric, Dan Rather's successor as anchor of the CBS Evening News, suggested just before the 2006 election that President Bush was manipulating gas prices to benefit Republican candidates, on the syndicated Chris Matthews Show over the weekend a conspiratorial Rather predicted “the people who can affect the price of oil would prefer a Republican” presidential victory, so “watch the price of oil.” Rather didn't identify these people, but presumably he meant Big Oil executives who he thinks can raise or lower prices at their whim. In the “Tell me something I don't know” segment, Rather told Matthews:

Things to watch with the thought in mind many people vote their pocketbooks when it comes to voting for President: price of oil. The price of oil has been high. The people who can affect the price of oil would prefer a Republican presidential candidate. Watch the price of oil. If it goes down, which it may very well it could help John McCain quite a bit.

Matthews tried to clarify: “October surprise?” Rather promised “October or before” and then anticipated “you'll hear the argument, 'listen, we never were in a recession, it was a near recession but wasn't actually a recession.'” Of course, as things stand now, that would be the truth, but in Rather's eyes that apparently would reflect some kind of nefarious scheme to fool the public.

As conspiratorial as Rather, back in August of 2006 CNN's Jack Cafferty wondered “if the oil companies might not be pulling the price of gas down to help the Republicans get re-elected in the mid-term elections a couple of months away.” 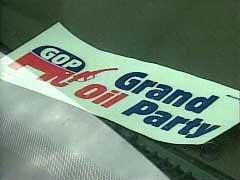 Although a Monday CBS Evening News story included a soundbite from an expert dismissing the idea as "preposterous," the newscast treated a far-left conspiracy theory -- about how the Bush administration is somehow manipulating the pump price for gas to help in the election -- as credible and worthy enough to deserve a broadcast network story. Citing how the price of a gallon of gas has fallen to the lowest all year, anchor Katie Couric wondered: "Is this an election year present from President Bush to fellow Republicans?" Over a shot of a "GOP: Grand Oil Party" bumper sticker laying on a dashboard, reporter Anthony Mason asserted: "Gas started going down just as the fall campaign started heating up. Coincidence? Some drivers don't think so." The man in the car insisted "I think it's basically a ploy to sort of get the American people to think, well, the economy is going good, let's vote Republican."

Over headlines from Daily Kos and Huffington Post, Mason conceded you can "call the conspiracy theory crazy," but he touted how "it's spreading through Internet blogs and over the airwaves. And a recent poll found 42 percent of people actually believe the Bush administration has deliberately manipulated the price of gas to affect the election." 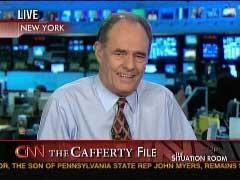 Wednesday's USA Today reported that gasoline prices could be closer to $2 a gallon by Thanksgiving. The paper cited the end of the summer driving season and decreased demand as causes for this predicted decline. Not surprisingly, CNN's Jack Cafferty saw something more sinister at work. Before his daily "Cafferty File" segment during the 4pm EDT hour of The Situation Room on Wednesday afternoon, substitute anchor John King and news reader Zain Verjee discussed this report and cheered on lower gas prices as good news. Cafferty then spouted off the old liberal conspiracy theory connecting Republicans and Big Oil: "You know, if you were a real cynic, you could also wonder if the oil companies might not be pulling the price of gas down to help the Republicans get re-elected in the mid-term elections a couple of months away."